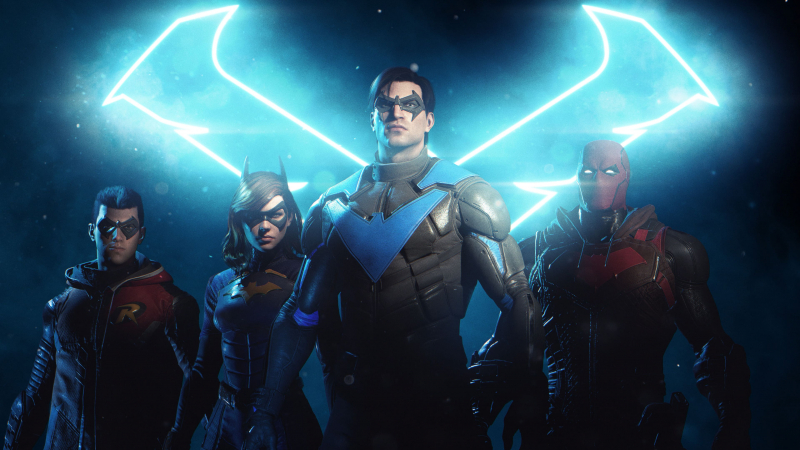 In the absence of Batman, the streets of Gotham are swarming with criminals, raptors and villains of all kinds. They have in fact never been so alive. But in the shadows, four vigilantes are watching them. And they are ready to do anything to protect the city, built from scratch right here in Montreal.

It's over for Batman. The notorious masked vigilante, an ardent protector of Gotham City, bows out inGotham Knights, perishing at the hands of his longtime nemesis, Ra's al Ghul.

Do not panic, this is in no way a spoiler.

Bruce Wayne dies in the preamble to this new video game adventure, even before the controllers grant any power whatsoever to the player. And the studio WB Games insisted on this point throughout the promotional campaign deployed even beforeGotham Knightshit stores last week.

The purpose of this upstream work? Make sure that fans have already taken the shock when the time comes to slip the game into their console.

N Nevertheless, the scene is striking, courtesy of the Montreal animation teams. You had to have guts – and not just a little – to start the Gotham Knights adventurewith these images of a Batman giving up the ghost. That, the members of the Montreal studio WB Games are well aware of. It was risky, yes, but it was above all “necessary” to offer players the possibility of progression, we are told.

“In fact, Batman is a paragon, he is already at the top of what he can be,” says executive producer Fleur Marty, by videoconference with Le Journal.

“And if he is alive, there is always a possibility in the player's head that he will eventually reappear, come to save things, et cetera. So his investment in the characters of our game would be diluted, if he thinks that this father figure can intervene at any time. So the best thing to do was to take Batman out of the equation entirely…by killing him. It's a risk, but it was necessary”, she adds.

But from a narrative point of view, this major death proved to be a powerful driving force for the four heroes. fromGotham Knights, namely Robin, Nightwing, Batgirl and Red Hood. Now united by this tragedy, they find themselves for a rare time on the same footing, starting on common bases. Because we won't hide it, deploying a plot with so many vigilantes complicates the task for the narrative team.

“But as we knew from the start, we planned everything accordingly; there are avenues that we have chosen not to explore for this reason. And this incident that begins the game – the death of Batman – allows us to apply the same theme to each character. From there, they each evolve in their own way, according to their background,” she concludes.

Thus, the player can explore the city of Gotham and its mysteries in the skin of the vigilante of his choice according to his prized strategies. For example, Red Hood represents raw strength, while Batgirl approaches events with more finesse thanks to her knowledge of technology. And you can change characters at any time, just to live the same story with different nuances.

All that, in addition, in solo or in duo. Because unlike the various chapters of the Batman Arkham saga, the emphasis has been placed on cooperative play, where two people can join forces to bring peace to the streets of Gotham. < /p>

“We wanted to make a game that plays just as well, and just as enjoyable, in single player and two-player co-op. So two knights can fight crimes on their own, at the ends of the city, then find themselves for a while to fight a villain or a particular crime, without having to be always together. It was important for us that one of the two proposals was better than the other”, specifies Fleur Marty.

► Gotham Knights is currently available on PS5 and Xbox Series.

The next generation is assured

Gotham can rest easy. Even without Batman, the city remains in good hands with Nightwing, Batgirl, Robin and Red Hood as evidenced by Gotham Knights, an imperfect, but frankly captivating game.

We admit it, we feared for the franchise started with Batman: Arkham Asylumin 2009, which now evolves without the Dark Knight. Would Gotham without its hero retain its appeal? The answer is not long in coming. And she is unequivocal: yes.

Because Nightwing, Batgirl, Robin and Red Hood prove to be worthy successors, taking up the torch of their mentor to clean the streets of the city of the scum that swarms there day and night. And by giving the player the freedom to choose the hero they want to personify (each has their own specific skills), we allow them to live a more personalized experience.

So we took a clever pleasure, first of all to explore the streets of Gotham – more magnificent and vast than ever – to track down Mr. Freeze, the Penguin and other Harley Quinns over the course of the various investigations offered.

C' is moreover on this point that Gotham Knights surprises more than its predecessors; the investigations carried out by our vigilantes are more involved and more complex, in addition to being damn well put together.

The combat involved still remains the Achilles heel of Gotham Knights. Yes, they are fluid and uplifting. But they are also, and unfortunately, repetitive in the long run. However, let us emphasize the uniqueness of each of the heroes made available to us; by alternating between Batgirl, Robin, Red Hood and Nightwing along the way, the player can momentarily circumvent this feeling of redundancy. We really get tired of hearing pedestrians and passers-by throwing the same bunch of phrases in rotation. “What, another vigilante?” » and others « Hey, but it’s Nightwing! did not take long to annoy us.

Still, Gotham Knights achieves what we thought [almost] impossible: keep Gotham as inviting as captivating, even without Batman's input. And for that, we tip our hats to him.