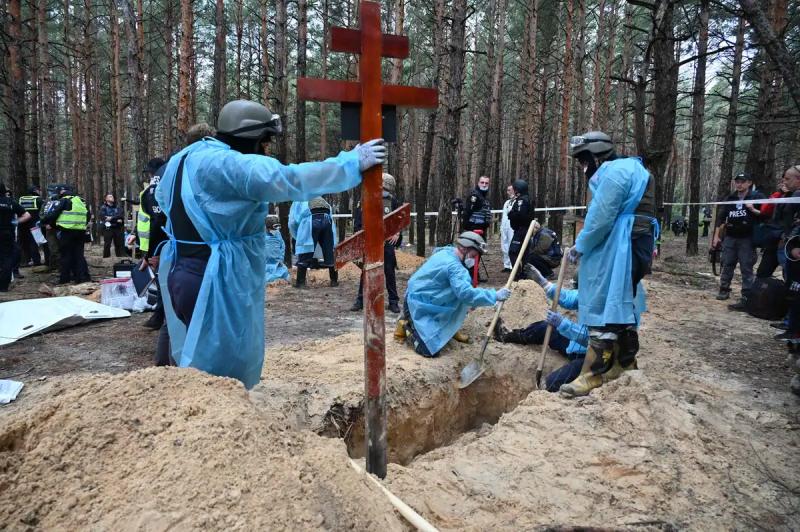 KYIV | “99%” of the bodies exhumed on Friday in Izium, a city in eastern Ukraine recently retaken from the Russians, “showed signs of violent death”, regional governor Oleg Synegoubov said in the evening. /p>

Ukrainian human rights official Dmytro Loubinets, for his part, indicated on Telegram that “there (were) probably more than 1000 Ukrainian citizens tortured and killed in the liberated territories of the Kharkiv region” .

In Izioum, “there are several bodies with their hands tied behind their backs and one person is buried with a rope around his neck. Obviously, these people were tortured and executed,” Synegoubov said on Telegram, accompanying his message with photos of the hundreds of graves found near Izium.

According to him, “450 bodies of civilians bearing traces of violent death and torture were buried” on this site discovered by the Ukrainian authorities.

Earlier in the day, an AFP journalist had been able to see at least one body with its hands tied with a rope on the same site, without being able to establish immediately whether it was a civilian or a soldier, the body being too damaged.

On Telegram, Oleg Synegoubov affirmed that “there were also children” among the bodies exhumed during the day by the “200 agents and experts” who are working on the site.

“The bodies will be sent for autopsy to determine the exact cause of death,” he said, adding: “Each death will be subject to investigated and will become evidence of Russia's war crimes in international courts.”

“The scale of the crimes committed (by the Russians) in Izium is enormous,” he said. , denouncing “a bloody and brutal terror”.

The counter-offensive launched at the beginning of September by the Ukrainian army in the region enabled the reconquest of territories hitherto occupied by Moscow troops.

Previously accused of war crimes in other regions of Ukraine, notably around kyiv in the first weeks of the conflict, Moscow has always rejected these accusations.