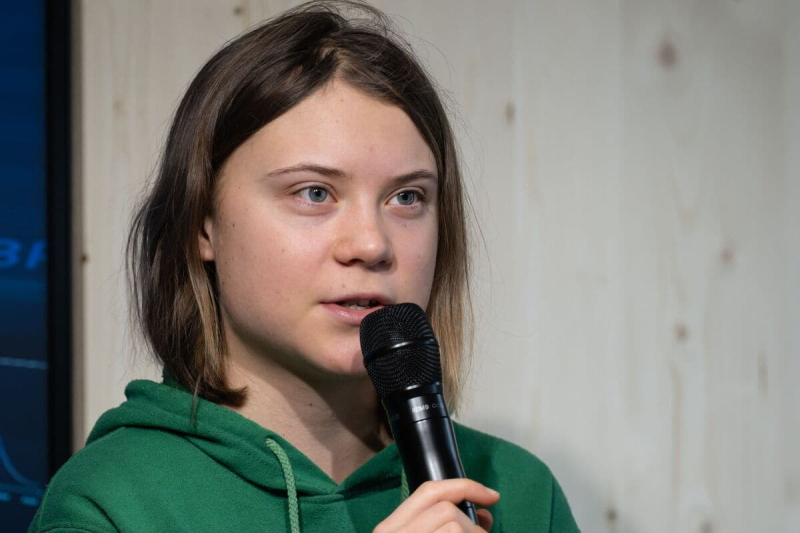 Greta Thunberg on Thursday accused the Davos Forum of bringing together “the people who most fuel the destruction of the planet”, deeming it “absurd” to listen to them and calling for “massive public pressure” against fossil fuels.

Davos is “the place where the people who fuel the destruction of the planet the most, the people who are in the middle of the climate crisis, the people who invest in fossil fuels, etc.,” she said. pointed out, accusing them of putting “greed” and “short-term economic profit above people, and above the planet.”

“We seem to listen to them, rather than the people who are actually affected by the climate crisis, the people who live on the front lines, and that tells us how absurd the situation is,” she lamented.

The Swede was taking part in an event organized on the sidelines of the annual meeting of the World Economic Forum in the Swiss ski resort, with other young climate activists and the director general of the International Energy Agency (IEA), Fatih Birol.

“My presence here is a very important signal that I want to give to the world,” said the latter.

“Climate change needs to be given more attention”, and this one “decreases”, he lamented.

And to call for much more investment in clean energy, especially in emerging countries. “There's a transition going on, but not at the speed we'd like to see,” he said. “What I think is missing is international political will.”

Greta Thunberg was accompanied by three other climate activists: Ecuadorian from the Amazon Helena Gualinga, Ugandan Vanessa Nakate and the German Luisa Neubauer.

They arrived in Davos with a petition launched this week calling for multinationals to stop exploiting fossil fuels. The text had gathered more than 910,000 signatures by early Thursday afternoon.

“If you do not act immediately, be warned that citizens around the world will consider legal action to put you in front of you. to your responsibilities. And we will continue to demonstrate in large numbers in the streets”, proclaims the petition, which copies the appearance of a legal notice.

“We are taking a very dangerous path. We are already seeing how people are suffering on the ground,” said Helena Gualinga. “It is completely insane to allow this (…) by investing in fossil fuels”, she lambasted, denouncing “criminal behavior”.

Vanessa Nakate, who, to some moments of his intervention was on the verge of tears, also regretted the lack of attention paid to Africa. “They focus on privileged countries, leaving out communities that have suffered for decades,” sometimes without even basic access to electricity.

This is not the first time that Greta Thunberg has come to Davos during the World Economic Forum meeting. The 2020 edition was notably marked by her skirmishes with US President Donald Trump.

It's time to “panic” because “the house is on fire”, she already hammered at the time.

Earlier this week, she had gone to support protesters who opposed the expansion of a coal mine in western Germany.

This initiative earned him a few hours of police custody on Tuesday, according to a police source, but also the support in Davos of the former American vice president and environmental activist Al Gore who said Wednesday “in agreement” with his fight .

The German project illustrates the increased use of fossil fuels by many countries in the face of the energy crisis fueled by the war in Ukraine.

“It's a fairy tale to say that new fossil fuels will solve any crisis whatsoever,” replied Luisa Neubauer, who also took part in the demonstrations in Germany. They “do not solve the energy crisis in Europe, but they produce crises around the world”.

Climate is a key topic at the Davos meeting this year. On Wednesday, UN Secretary General Antonio Guterres has already called for the oil majors to be prosecuted, as the tobacco companies have been, for having hidden for years the information they had on global warming.