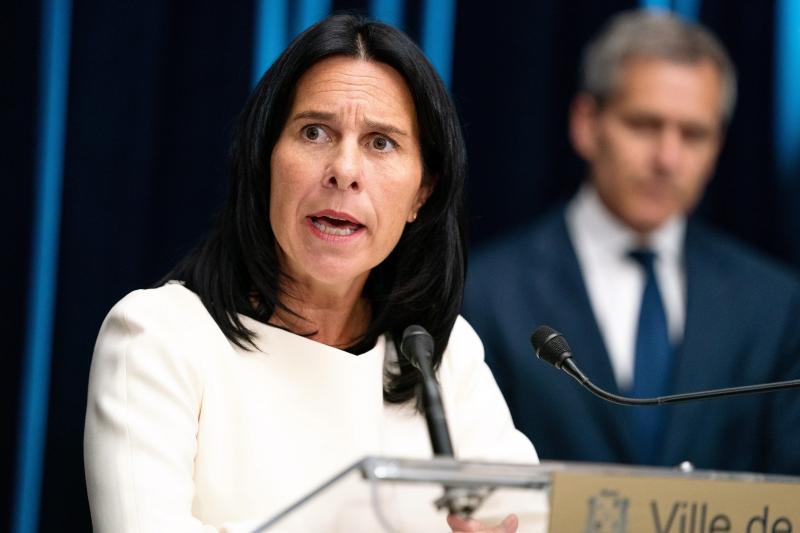 The Mayor of Montreal, Valérie Plante, acknowledges that her citizens feel less safe because of the unprecedented wave of gun violence that is rocking the metropolis. She admits that it is very difficult to recruit police officers at the moment.

Both the mayoress and Prime Minister François Legault promised yesterday that they would not leave Montreal in the hands of criminals, the day after a particularly bloody day in which two men were shot dead in broad daylight, about thirty minutes from 'interval.

Thirty minutes earlier, it was the alleged trafficker Maxime Lenoir who fell under the bullets, at the Rockland Center, in the borough of Mount Royal.

“We will not accept, as a government, that Montreal becomes a shooting range for gangs,” wrote Mr. Legault on Twitter.

Ms. Plante used a similar formula a few hours later at a press conference, stating that “Montreal is not going to become the playground of criminals”.

It is that concerning the two murders of Tuesday, “everything leads to believe that it was settling of scores of organized crime, underlines the mayor. We are not going to hide it, we avoided the worst. There could have been innocent victims.”

Tuesday around 1:30 p.m., Diego Fiorita, 50, was shot dead at the Pizzeria Napoli, on rue Saint-Denis.

“The feeling of security is affected”, regretted Mrs. Plante.

But neither Mrs. Plante nor Mr. Legault had nothing concrete to announce for the moment, yesterday.

In a press briefing that began late, the mayor said she was in discussion with the governments of Quebec and Canada, adding that “concrete” measures would soon be announced, particularly for the recruitment of staff and to increase resources. financial resources.

The Prime Minister, for his part, promised that “we will not skimp on the means to restore order and protect the citizens”.

According to Valérie Plante, one of the problems is the difficulty in hiring peace officers.

“All the police forces in Quebec are having difficulty recruiting, and we are asking for a solution at the source, at the National Police School. A solution adapted to Montreal,” she said.

The number of police officers in Montreal would also be decreasing, if we are to believe the Brotherhood of Montreal Police Officers (FPPM ).

In an open letter addressed to the mayor on Monday, Yves Francoeur, who is its president, demanded more hiring, while the SPVM would have 72 fewer police officers in its ranks than 10 months ago.

Present alongside the mayor, the interim director of the City's Police Department of Montreal (SPVM), Sophie Roy, was asked if there are enough police officers. According to her, it is not just the numbers that will resolve the situation.