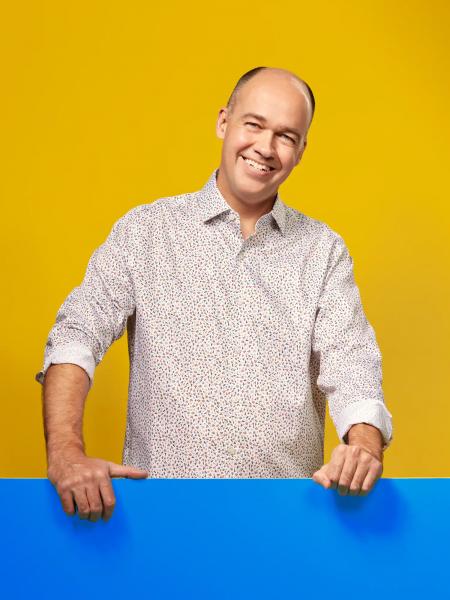 “My real job, my real career, is to be a comedian.” Even if he participated seriously in the PQ leadership race, in 2020, Guy Nantel is back with great pleasure on the boards with a new comedy show. And as the subject of this sixth solo show, he has precisely decided to take the public behind the scenes of the political world.

In October 2020, Guy Nantel lost in the second round of the Parti Québécois leadership race. PQ activists then decided to elect Paul St-Pierre Plamondon. Even if he was disappointed with the result (“obviously, I wanted to win the race”), Nantel had continued with good heart his comedy tour Our rights and freedoms.

For his new show, If I understood you correctly, you're saying…, which he is officially launching in a few days, Guy Nantel has chosen to approach this short passage within of the Parti Québécois.

“It was while doing this race that I realized that there were a lot of things that I saw from the inside and that people did not know,” he says.

Not glued to the news

On stage, the comedian resumes his usual intense and talkative character that should not be taken at face value. He mentions in particular what he would have done if he had been elected leader of the PQ. “I also say that I would have made an excellent Prime Minister and I come up with all sorts of wacky solutions.”

Several themes pass through it, including the environment, COVID, the place of the elderly and global warming. Because his texts are not glued to the news (“a show still lasts two and a half years”), Guy Nantel has voluntarily chosen not to talk about the provincial election campaign that we have just experienced.

“The show is really not about that. This is not InfomanI'm doing. It is my stage character who says how he would have solved all the problems of Quebec, in the space of a few moments and a few easy solutions. That's really what it's all about. To talk about something in the campaign, the reference should be clear to everyone.”

Faithful as usual, Guy Nantel worked completely alone for this new show. “I write on my own. I don't have a director. It's me. Anyway, I have a style where I'm standing behind a microphone…”

The comedian also does not have a second look during his break-in period. “It is the public, my gaze. I do the things I like to do and if they find them funny, we have what it takes.”

Unlike many of his friends, who roll out their new shows number by number in different evenings of humor, Guy Nantel opts for the “old school” method.

Guy Nantel denies practicing a too niche humor. “My goal is not to interest people who are interested in politics,” he said. My goal is to make people laugh. So everyone who is interested in humor is my audience. […] It is true that my audience is interested in culture, society, politics. But when I write a show, I always start from the idea that if a Frenchman or a Swiss lands in Montreal and they don't know anything about society, they have to understand the whole show.” < /p>

♦ The show If I understand you correctly, you are saying…, will be presented in Montreal (Théâtre Maisonneuve, October 25, and Olympia, December 10) and Quebec (Salle Albert-Rousseau, November 8-9, February 22-23). For all dates: guynantel.com.

New tour across Quebec, regular appearance on the Stéphan Bureau show and daily collaboration on the radio show by Sophie Durocher. Fall 2022 for Guy Nantel will be busy to say the least. “It makes a change from the pandemic!” he said laughing.

For the past few weeks, Guy Nantel has been one of the regular debaters on the new show Le monde à l'envers, every Friday evening on TVA. Even if the show is filmed live, and the comedian is currently on tour, he should participate “about half the time”. “We arranged [with the calendar]. There are broadcasters who have done us a favour.”

“It's an important show,” he said of this new meeting led by Stéphan Bureau. […] I find it really important that the debate exist, in a polite and civilized way, but nevertheless firm. I like that we have the right to say things that can be very different, even shocking. They sometimes have their reason to be said.”

For this new job, as for the one on the radio, Guy Nantel has completely put away his humorist hat. “I don't make jokes because I don't have time to do so! he said laughing. But this is not a comedy show. I don't prepare a line for that. From time to time, I like it, to do a little trickery to destabilize my debate opponents. We are adversaries, but we are all partners on the show. It's a good war. I like it.”

“It’s a fifteen-minute conversation on a topical subject. I have carte blanche on the choice of subject. I say what I have to say. […] Sophie and I often agree, but sometimes we disagree. It is very good. I really like the tone. It's very cordial.”

See you next time…?

“If I understood you correctly, you are saying: see you next time,” René Lévesque had launched on the evening of the 1980 referendum. With the title of his new show which obviously recalls this mythical phrase, Guy Nantel wants to he send the message that there will be a next time for him in politics?

“I still have that call in me, he replies. I always have this feeling that if people took me seriously and knew how much I think I can rally a lot of people… […] I think I had my relevance [as head of the PQ] and I still have it. If the party were to have no leader, and I was better received than the first blow, that I really felt a real momentum…”

For ten years, when asked if he wanted to go into politics, Guy Nantel answered in the negative. Then, seeing in recent years that the Parti Québécois was languishing in the depths of the polls, the comedian had agreed to throw himself into the arena.

“I went there to give a hand, to put the spotlight on the Parti Québécois, on the absence of sovereignty,” he says.

A part of altruism

< p>“Before that, I always said there was no point in going there. Because it requires you to work much harder than a comedian and it pays much less. One is hated and the other is loved. When you think about it rationally, there's no advantage for a guy like me to go and do that. There is really a part of altruism in that, thinking of the Quebec nation.”

Guy Nantel very much liked the human experience lived during this brief stint in politics, two years ago . What he found difficult to understand, however, “was the intensity of people inside the party who categorically refused the idea that a comedian could run for leadership”.

“They almost saw it as a form of aggression against their own party. I wasn't going there to make a joke. I was really going there to help the party get seen. And also, I really thought I could have my relevance to help Quebec flourish.”

This defeat in the second round was not frustrating for Guy Nantel, he assures.

“PQ members came to get me. It was not my dream, in my life, to be in politics. I'm doing my dream job right now.”