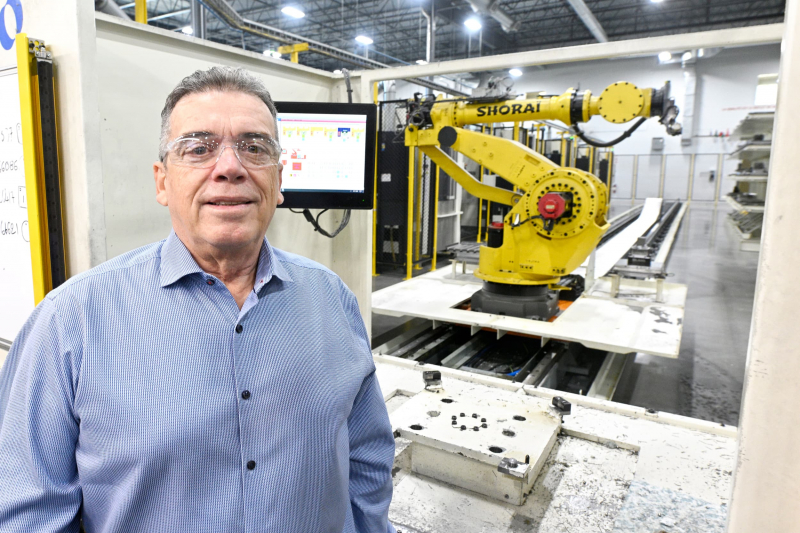 A maker of aircraft parts found in Bombardier's Airbus A220s and Global 7500s has invested more than $30 million in robots and systems to stay competitive at its Boisbriand plant .

“Without our machines, we would be more than double the number of employees, because today one person manages six machines,” says Rui Cabral, Vice President of Industrial Strategy at Abipa.

“It would take a lot of manpower, which we don't have in Quebec,” he continues.

At the entrance to the Basses-Laurentides company, we do not skimp on security. After passing through the factory gate, a photo is taken of each visitor to make a self-adhesive badge, which must be worn with steel toe shoes.

Inside, more than 130 people swarm between the robots, which chisel, cut and drill parts, which will end up in planes.

Without these high-performance robots, it would take at least 300 people to getting the job done.

In Quebec, nearly half of companies have integrated no – or almost no – digital technology into their operations, according to the most recent Quebec Industrial Barometer from Sous-marché industrielle Québec (STIQ).

“ Only 3% of the smallest are very advanced in their integration process”, we underline.

In the era where well SMEs are still hesitant about the idea of ​​automating their operations, Abipa is an exception.

At a time when some fear the arrival of robots in factories, the general manager of Abipa Boisbriand , Rui Cabral, shatters the myth of the job-stealing robot.

“There are boring, not very challenging, repetitive tasks that robotics can do better, and it also makes management easier,” he explains.

His unionized workers, who earn in the twenty dollars an hour, take pride in handling state-of-the-art toys, he points out.

“Instead of operating a manual machine, they become managers of robotics systems. It values ​​their work. It transforms their skills,” adds the leader.

Around him, his machining workers become software specialists. Gone are the days when they had to be content with doing the same thing mechanically all day long, and sometimes all their careers.

Meticulously, employees operate dozens of stations with small islands, in addition to keeping an eye on the grain to ensure the quality of the tools.

At the end of a cleared aisle, Rui Cabral shows us his flagship machine. It is called “Shôrai”, which means “future” in Japanese, the manufacturer's country of origin.

As more than 44% of companies, for lack of employees, are unable to carry out their usual activities, according to the Canadian Federation of Independent Business (CFIB) , the manufacturer Abipa must also pull out all the stops to unearth the talents he needs.

“Today, the hunt is on. There is a lot more turnover than 10 or 20 years ago. Before, we chose; now it’s the employee,” concedes Rui Cabral.

“We mobilize them to keep them interested and provide them with professional challenges,” he says.

At the end of the plant, in the laboratory, Alexandre Falardeau, who programs the machine inspecting pieces, monitors the quality of the pieces.

“I make sure that the first piece we have is correct before launching into large-scale production,” concludes the man who has worked there for 15 years.

►More than 71% of companies believe that digital technologies are a somewhat or very important priority, notes the Quebec Industrial Barometer.