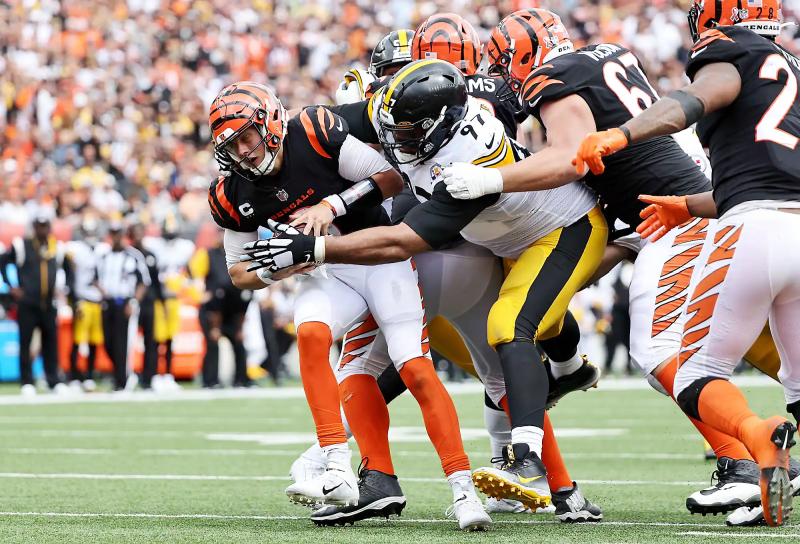 Everything that worked last year to make the Bengals' season magical turned sour yesterday against the Steelers. A gruesome first game that feels like the Cinderella team of 2021 is turning into a pumpkin.

Despite everything, the Bengals came within a whisker of winning , ultimately losing 23-20 in overtime, in their jungle.

Last season, Joe Burrow's phlegm made his legend. The more the season progressed, the more he performed by jealously protecting the ball at the same time.

Against the Steelers, the post-
Super Bowl awakening was brutal with four interceptions, a career high. A fifth turnover was added to his record when he was bagged by Alex Highsmith, who lost the ball.

His very first assist of the match was brought back in the end zone by Steelers safety Minkah Fitzpatrick. The quarterback repeatedly attacked double covers in a reckless manner.

Another player who put smiles on the faces of Bengals enthusiasts last season was unflappable kicker Evan McPherson, smoking on the big chances.

Yesterday, his attempt at a convert that would have gave the Bengals the win was blocked by Fitzpatrick (definitely in good shape, that one!).

Then, in overtime, he covered himself in shame by missing a 29-yard field goal .

That's what worked well for the Bengals a few months ago and fell apart against the Steelers. But even more worryingly, what was already malfunctioning, the offensive line, turned out to be an abomination. There is no other word.

Throughout the offseason, the Bengals were praised for their work in rebuilding the line. Four of the five starters for that opener were not from last season's atrocious line, which could have nearly cost Joe Burrow his life.

What had to be the most bright for the Bengals was rather a disaster. Burrow was the victim of seven quarterback sacks. He was hit 11 times.

No need to press the panic button, though. It must be considered that the Steelers always have the art of manhandling opposing quarterbacks. Nevertheless, the Tigrés attacking line is far from the expected start.

If there's one thing the Bengals can take comfort in, it's that, despite their atrocious outfit, they almost got away with it unscathed. Burrow will certainly pull himself together and the big guys on the line in front of him can work on their cohesion. A game does not make a season, however painful it may be.

The Steelers won thanks to a fierce performance from their defense. On offense, with just 13 first plays and 231 yards, the Mitchell Trubisky era hasn't started off with a bang.

The combative representatives of Pittsburgh have the merit of always be competitive, no matter how many staff they have to juggle.

Except that in this first game of the season in the tough North Division of the American Conference, the truth is that it was the Bengals who beat the Bengals.

What a shame the Steelers monster is hurt! We are talking about a possible tear in the pectoral muscle. He was epic against the Bengals with six tackles, including three for a loss, a sack, an interception and two knockdowns. Get well soon!

The brilliant Vikings receiver gained 184 of Kirk Cousins' 277 yards in an unequivocal win over the Packers. He added two touchdowns. He is simply spectacular.

The Eagles have been looking for a true number one receiver for several years. They paid for AJ Brown and in light of his debut (10 receptions, 155 yards), they finally seem to have their problem sorted.

Very few gave much of the skin of the Browns, including yours truly, but their ground tandem formed by Nick Chubb (141&nbsp ;yards) and Kareem Hunt (46 yards, 1 rushing touchdown and 1 pass) took control.

No Tyreek Hill, no problem! The Chiefs quarterback battered the Cardinals defense with five touchdown passes and 360 yards. Nine different receivers contributed to the picnic. As if nothing had happened…

The Patriots managed to advance into Dolphins territory five times, but only shot seven points. Three turnovers hurt. Nothing to ease the fears that have lingered since training camp about the offense.

The Trey Lance era got off to a disappointing start. No need to throw tomatoes at the young quarterback. The field conditions were miserable and the team also repeatedly shot themselves in the foot with 12 penalties.

Before he showed vital signs in the fourth quarter, Baker Mayfield was horrible for three quarters against his former team. It's clear that Mayfield is a better option than Sam Darnold for the Panthers, but he's getting up and fast.

After a week of activity, no team claims a victory in the American Conference South Division. The Colts and Texans tied, while the Jaguars and Titans were caught late in the game. The only positive? The valor of the Texans.

What an atrocious performance! Sure, Kyler Murray was outgunned offensively due to injuries, but that doesn't justify the dismal defense.

1.Michael Thomas is back!

Best receiver on the circuit in 2019, Michael Thomas, of the Saints, has since disappeared from the radar. He only played seven games in 2020 and he was sidelined all last season. The Saints trailed 26-10 in the fourth quarter when Thomas responded with two touchdowns to close the gap. He had not scored a touchdown since December 22, 2019.

The Jaguars squandered a rare fourth-quarter lead against the Commanders, but still got a chance to reclaim the lead late in the game. Advancing into midfield, second-year quarterback Trevor Lawrence attempted a long pass to new receiver Christian Kirk. Safety Darrick Forrest came in and cut the Jaguars' hopes short with an interception that ended the duel.

In his first game at the helm of the Dolphins, Mike McDaniel showed all the confidence he had in his offense. Late in the first half, his team found themselves in position for fourth down and seven yards to go at the Patriots 42 line. Rather than play conservatively, McDaniel decided to go with a pass. Tua Tagovailoa spotted Jaylen Waddle, who took the Patriots defensive backs around him by surprise and frolicked into the end zone. A turning point in the encounter.

The Chargers were betting a lot on the arrival of quarterback hunter Khalil Mack to restore their defense. So far, the investment has paid off. Mack was diabolical against the Raiders with three quarterback sacks. The Raiders had the ball late in the fourth quarter, and Mack again applied pressure on Derek Carr, who was eventually brought down by Joey Bosa (1.5 sacks) and Morgan Fox to end the dispute by losing him the ball. The Chargers defense will never be the same.

The Giants caused one of the upsets of the week by upsetting the Titans. We must salute the courage of the new head coach Brian Daboll. Rather than go for a conversion kick that would have tied the game at 20-20 late in the fourth quarter, he called for a two-point convert, managed by Saquon Barkley. The carrier was instrumental on the final stretch, with 51 yards rushing and three passing. He finished with 164 yards rushing and 30 passing.