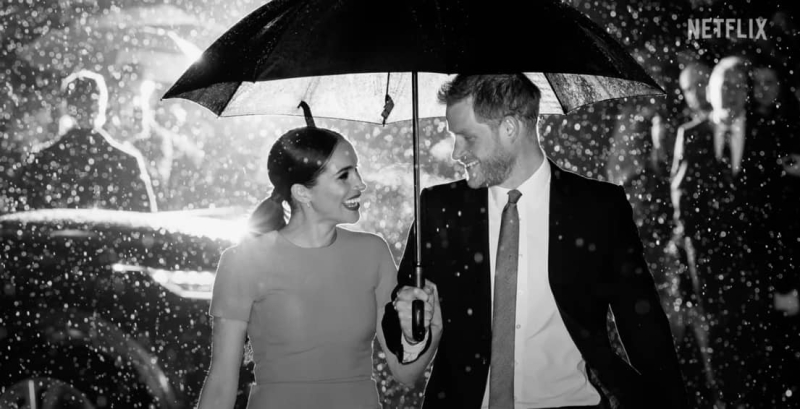 Documentary or declaration of war? The British monarchy awaits with apprehension and a touch of weariness the world release on Thursday of the series devoted to Harry and Meghan, the first extracts of which have already reignited tensions between the “Sussex” and the rest of the British royal family.

“Nobody knows the whole story. We know the whole story,” says dramatic Harry in a clip released Monday by Netflix, announcing the December 8 release of the first three episodes of the soberly titled “Harry & Meghan”. The other three will be released on December 15.

Critics against the press, accusations of racism, denunciation of the suffering generated by the “firm”: three months to the day after the death of Elizabeth II, the big-budget series reopens the wounds of discord between the Sussexes and the rest of the royal family, which Harry and Meghan left in 2020, in particular due to harassment from the British tabloids.

The marriage in 2018 between the youngest son of King Charles III and the Métis American actress had however been experienced as a breath of fresh air for an aging monarchy. “And then everything changed”, describes the couple in the trailer.

Harry underlines the “hierarchy in the family”, a lawyer close to the couple, Jenny Afia denounces “a war against Meghan, to accommodate other people's agendas. “It's about hate, it's about race,” insists a friend.

Harry, 38, denounces “leaks” and stories in the press, and deplores “the pain and suffering of women who marry within the institution” while images scroll by of his mother Diana, killed in a car accident in 1997 while she was being chased by paparazzi.

“I was terrified, I didn't want history to repeat itself,” he adds .

Contacted by AFP, Buckingham did not comment but according to palace sources cited by the tabloid this weekend < em>The Daily Mail, Charles and Queen Consort Camilla are 'a bit weary' of these relentless attacks.

The revelations in the documentary could 'be worse than what they expected. await the Royals”. “It's going to be explosive,” a source at Netflix told The Mirror newspaper.

Now settled in California, Harry and Meghan had already given a shock interview on American television last year, accusing a member of the royal family of racism who would have questioned their son Archie's skin color before birth. The royal family is “absolutely not racist”, Prince William, now heir to the Crown, had to defend himself.

Since then, the break has been consummated between the two brothers and their wives. Those once nicknamed “the fantastic four” made an effort after the death of Elizabeth II: they gathered together in public in Windsor, but without speaking.

L he fragile hope of a reconciliation was dashed by the first trailer for the series released last week, in the middle of a visit to the United States by William and Kate, a trip also tarnished by a racist controversy in Buckingham. < /p>

In this neat clip, black and white photos of Harry and Meghan follow one another to dramatic music. A single shot shows William and Kate with particularly hostile faces, just after an image of Meghan visibly crying.

“Sabotage”, “Declaration of war”, “Harry, why do you hate your family so much?”, headlined the British tabloids, which see William and Kate as the perfect couple, with a sense of irreproachable duty, when Harry and Meghan are compared to the Kardashians who are capitalizing on the big unpacking in their personal lives.

Since leaving the royal family, Harry and Meghan have signed lucrative contracts – estimated to be worth more than $100 million – with Netflix and Spotify. Harry is also due to release his memoir The Substitute in January.

Denouncing the couple's 'obsessive self-pity' and their 'manifest contempt' for the royal family, the newspaper The Sun believes they should be stripped of all their honorary titles.

They are the least popular royals in the UK after Prince Andrew while William and Kate garner 81% and 75% favorable opinions respectively, according to a recent YouGov poll.