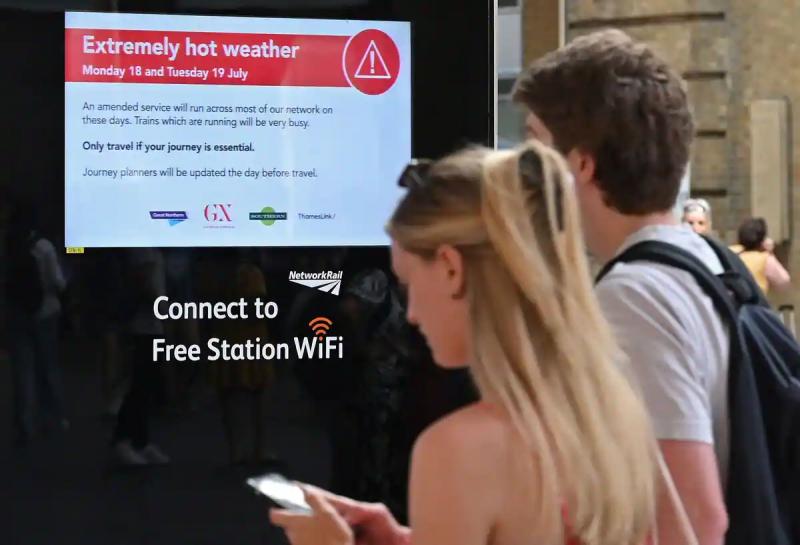 The temperature exceeded the 40°C threshold in the United Kingdom on Tuesday, a first in this country hit like the rest of Western Europe by a heat wave which has caused devastating forest fires, particularly in France.

This is the second intense heat phenomenon in barely a month in Europe. This multiplication is a direct consequence of the climate crisis according to scientists, with greenhouse gas emissions increasing in intensity, duration and frequency.

Mercury has exceeded an all-time high in the United Kingdom with 40.2°C at 11:50 GMT at Heathrow airport in west London, the Met Office weather agency announced.

The historic temperature record – which dated from July 2019 with 38.7 degrees – had already been beaten in the morning with more than 39°C recorded in south London.

“It is certain that the Brits aren't used to that. It's hard to be outside, even in the shade it's suffocating,” Emily Nixon, 34, told AFP, who found refuge in a municipal swimming pool in the British capital on Monday.

After having experienced the hottest day of the year on Monday, the British spent the hottest night ever recorded in the country with temperatures which in places did not drop below 25°C.

Transport Minister Grant Schapps stressed on the BBC that “no”, the country's public transport dating back to Victorian times was not able to handle such heat.

“ All trains are canceled due to the heat. I don't understand. They have trains in Australia. Which works. What is the problem here?” annoyed Ashley Meeloo, a 62-year-old user in London.

The government has been accused of taking the phenomenon lightly. Resigning Prime Minister Boris Johnson skipped an emergency crisis meeting on Sunday, preferring to attend a farewell party, and Deputy Prime Minister Dominic Raab told Britons to 'enjoy the sun'.

< p>Environmental activists from the group Extinction Rebellion smashed windows of News UK, which publishes the tabloid The Sun, on Tuesday morning to protest against the treatment of the heat wave in some media.

“The Sunchose to feature images of women in bikinis, beaches and happy children with ice cream,” the group said. Another tabloid, the Daily Express, headlined Monday, “It's not the end of the world, stay cool and carry on.”

Elsewhere in Europe, the Netherlands, which recorded its hottest day of the year on Monday with 35.4°C, was already facing temperatures of 33 degrees around 9:20 GMT. Some 39°C are expected in the afternoon.

Belgium fears records, the thermometer can climb up to 40°C. Exceptionally, the major museums run by the federal state are accessible free of charge to over 65s who can find some freshness there.

In France, the temperature should drop on Tuesday on the Atlantic coast after a complicated night in Gironde, in the south-west of the country, on the front line of the two giant fires which have already ravaged more than 19,000 hectares of forest.

Faced with these gigantic fires, a total of 37,000 people had to be evacuated in six days.

In Brittany, a region generally little affected by forest fires, nearly 1,400 hectares of vegetation went up in smoke in Finistère and 500 people were evacuated.

In Spain, where the extreme heat wave has been raging for almost ten days, forest fires continued to rage on Tuesday, especially in the province of Zamora (northwest). According to regional authorities, nearly 6,000 people had to be evacuated because of the flames which destroyed several thousand hectares of meadows and forests.

A slight respite was announced on the temperature side by the national meteorological agency, while the mercury has cheerfully exceeded 40°C in recent days.

“Climate change kills people (…) but also our ecosystem, our biodiversity”, reacted Monday the president of the government Pedro Sanchez.

In Portugal, more than 1,400 firefighters continued to fight Tuesday morning against the fires.

The two The most worrying forest fires are in the far north of the country. One of them mobilized nearly 700 firefighters on Tuesday.

A couple in their seventies died in the area on Monday as they tried to escape the flames.

A further rise in temperatures is expected from Wednesday in the country.

All of Germany is also facing this heat wave but in Lower Saxony (north-west), temperatures could reach Tuesday 40°C and therefore approach the record of 41.2°C recorded in 2019, which could be beaten on Tuesday or Wednesday, according to meteorologists.