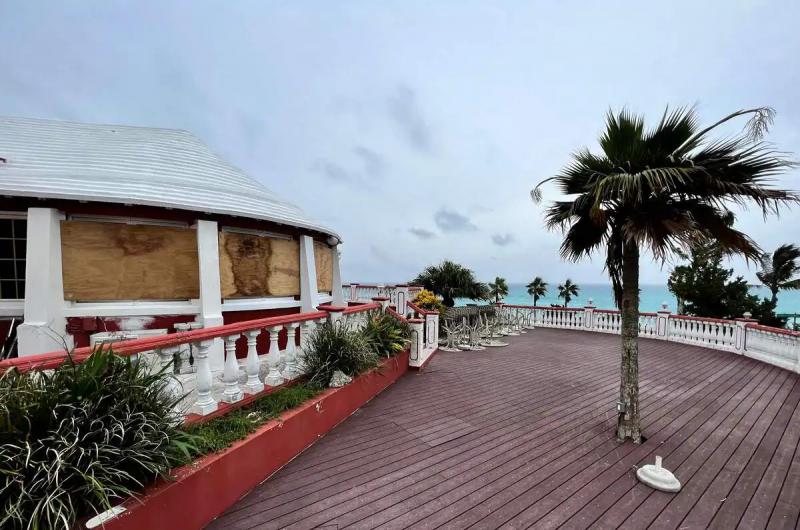 160 km/h gusts and heavy rains battered Bermuda early Friday, leaving thousands without power, as Hurricane Fiona, after wreaking havoc in the Caribbean, avoided the archipelago in the Atlantic Ocean.

At around 6 a.m. (0900 GMT), the heart of the hurricane was some 250 km northwest of British territory, according to the US National Hurricane Center (NHC), which downgraded Fiona from Category 4 to Category 4. category 3 from Saffir-Simpson in its latest bulletin.

Overnight, power went out in places and more than 7,000 people were without power by dawn, according to authorities, who fear damage in coastal areas.

Schools are closed on Friday and the government has announced the opening of an emergency accommodation center. Bus and ferry traffic has been suspended since Thursday evening.

Thursday evening, faced with increasingly powerful gusts and waves, residents, after putting away deckchairs and umbrellas and caulking the fronts of stores following the hurricane warning from the authorities, had taken refuge in their homes at nightfall.

“This hurricane is going to be worse than the last,” feared Richard Hartley, a business owner in the capital, Hamilton, while affixing metal plaques to the windows of his shop with the help of his wife.

Fiona, which eventually skirted the island in weakening condition, can cause hurricane winds more than 100 km from its core and some blowing up to 210 km/h, according to the NHC.

In Bermuda, a very small archipelago of 64,000 inhabitants and 54 km2, the NHC had forecast heavy rains, up to 100 mm, and “large destructive waves”. We did not know the extent of the damage on Friday at dawn.

“We have to live with it”

The territory, located a thousand kilometers from the United States and accustomed to hurricanes, is one of the most isolated places in the world, which makes evacuation almost impossible in the event of an emergency.

“We have to live with it because we live here,” said JoeAnn Scott, who works in a store in Hamilton. Locals “try to take it as it comes. And pray,” she added.

Along the famous Horseshoe Bay beach, some took advantage of the exceptional conditions on Thursday to go kitesurfing. “They are a little crazy,” said Gina Maughan, who had come to stretch her legs one last time before a long night of waiting.

Due to its geographical location, the main island therefore took the preparations seriously.

Many of the boats moored in clubs have been pulled out of the water this week and outdoor furniture, both in homes and restaurants, has been taken to safety.

The Minister of National Security Michael Weeks called on residents to stay home until given a green light. “Please don't drive, don't venture outside to take pictures, don't be reckless,” he said at a press conference.

The Bermudians stored food, candles, and some filled buckets with water from their reservoirs.

As the island does not have a source of fresh water, all buildings have reservoirs for storing rainwater, connected to the houses by an electrical system. Power cuts are possible during storms, so residents often fill their bathtubs or buckets in anticipation.

“The buildings are really made to last, and we never see the devastation that the Caribbean has experienced over the years,” said Mr. Hartley's wife, Elaine Murray.

Fiona caused the death of four people in Puerto Rico, American territory, according to an official quoted by the media. One death has been reported in Guadeloupe (France) and two in the Dominican Republic.

US President Joe Biden has declared a state of emergency in Puerto Rico, which is barely recovering from the passage of the Hurricane Maria five years ago.

FEMA, the US federal disaster management agency, plans to send hundreds more of its personnel to Puerto Rico, which has suffered massive power outages , landslides and floods.

“It breaks my heart,” the leader of the American House of Representatives Nancy Pelosi reacted on Thursday.

In the Dominican Republic, President Luis Abinader has declared a state of natural disaster in three eastern provinces.