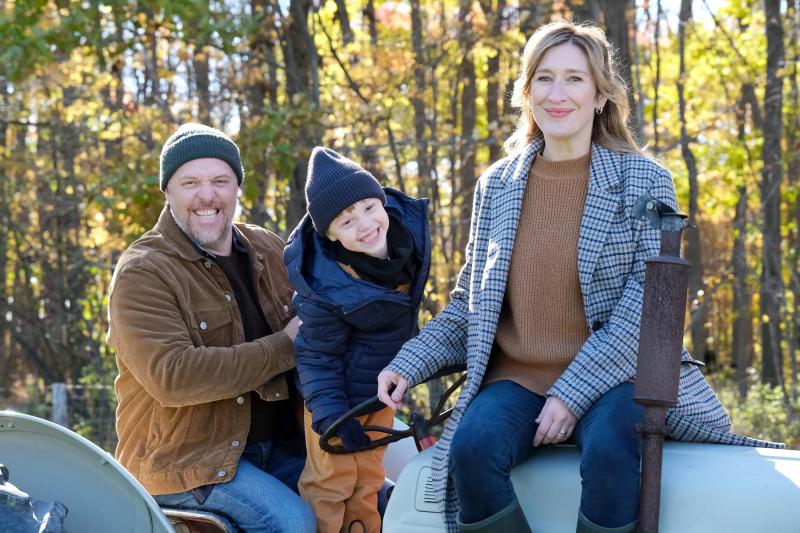 There are some lovely dad characters on our airwaves. Those who try to take their place, others who embrace their role with benevolence. Some are authoritarian while others try to be more so. They are loving or repentant, cakey or strict. But all have family at heart. On this Father's Day weekend, let's put the spotlight on some of these beautiful characters.

If he left his job as a teacher for that of an author, if he left the city for the “tranquility” of the countryside, François knew how to convince his little clan to follow him in his crazy adventures, even his big city ​​teenager, not too manual, addicted to WiFi. François is looking for answers about happiness. He wants to realize himself, to accomplish meaningful things, to find a rhythm and a more satisfying space. For the moment, the many hidden defects of his new property and the surprises that his new town has in store for him are his big source of concern.

We can say that since he married his beautiful Cindy, and especially since he became a father, Leo is a new man. He wants the best for his offspring. When his little Paul was a baby, Leo was concerned about his development. No question that he is lazy or behind the others. Now that Paul is entering kindergarten, new challenges arise. The daily life is no longer the same in this fourth season. And Paul doesn't seem to like school that much. It will therefore be up to Leo to hold his own like dad.

The desire to have a child is normally shared between two lovers. But it happens that the desire of a family is not a common project and that it upsets the installed dynamic. This is what happened in the life of Louis. Annie, his wife for ten years, did not want children, but for Louis, there was no question of missing out on this chance. It was an opportunity to talk about adoption with great delicacy. Louis is a great anxious anxious to always do well. He wants everything to be perfect, he wants to live up to it, to say and do the right things. Being a father is learned little by little with kindness.

A well-known actor, he is practically raising his daughter, Kim, a sharp teenager at first sight who is diagnosed with heart disease, which forces him to stay in the hospital. Helpless, his father tries to understand. When he is not on a film set, he comes to see his daughter, but he cannot be as present as he would like. Her worry mixes with sadness and pain when a surgery doesn't turn out as planned. A parent should never see a child leave.

We can sometimes believe that Jean-François is an eternal teenager in a man's body. If he certainly lacks organization and still often relies on his ex, he makes efforts to prove that he is responsible. He is certainly benevolent and less firm with his three children. If mum is letting go, dad sometimes gets over it quickly.

6) Kiwedin “Rémi” Dumont (Marco Collin) in For You Flora

Mr. Dumont has a heavy past that has left its mark. Separated from his family by the Oblates, he was placed in a boarding school to silence his culture. This is the sad reality of too many Aboriginal people. As he grew older, he fell into self-destruction. He has a son whom he is trying to win back after too much wandering. Grandchildren also who forgive him more easily. After reconnecting with his origins, Kiwedin tries to put the pieces back together with his family. He does it with wisdom, delicacy and poetry, although the wounds are still sensitive.

If there is a father figure who has overwhelmed us both by his kindness, his benevolence, and by his departure, it is that of Sylvain Lessard. This athlete dad, Olympian, has always been behind his daughter. A strong entourage makes great champions. He has always put the interests of his two daughters before his own. A real sugar daddy. To protect them, to spare them while they were living through questioning, he preferred to remain silent about his illness. Until it's no longer possible. So as not to be a burden on the women he loves, he chose medical assistance in dying, a landmark scene of the past year, full of love and humanity.

Mourning his wife and a long friendship that left him betrayed, Henri spent some time in Japan for a change of scenery. Back home, he wants to focus more on his family life with his two grown children, he who has always been very involved with his patients. William, his son, is in search of independence. The relationship with his father will not always be easy. Marine is trying to calm things down. Let's not forget that everyone is in mourning although they are trying to look to the future.

It is not for lack of love that Marc-Alexandre leads a double and even a triple life. Each of the women he dates, he loves them. How he loves his children too. With tenderness, following their evolution, being interested in what they live even if he is only there part-time. He also tries as best he can to be a good father-in-law. What he manages to do with the youngest. The problem is that it is his children who first discover the subterfuge, his two 19-year-olds from two different relationships. And lying is bad for children.

Sometimes there is unaware fathers. Or fathers left in the void. This is the case of Keuvin to whom Daphnée hid her paternity. Marie-Lune, a brilliant young girl as perceptive as she is resourceful, always wanted to know who her daddy was. When he returned to the scene by dating his sister Jade, Daphnée could not keep the secret. While she thought he would not want to get involved, Kevin was nevertheless impressed by his offspring whom he certainly wants in his life. Complicity was established from the first meeting.