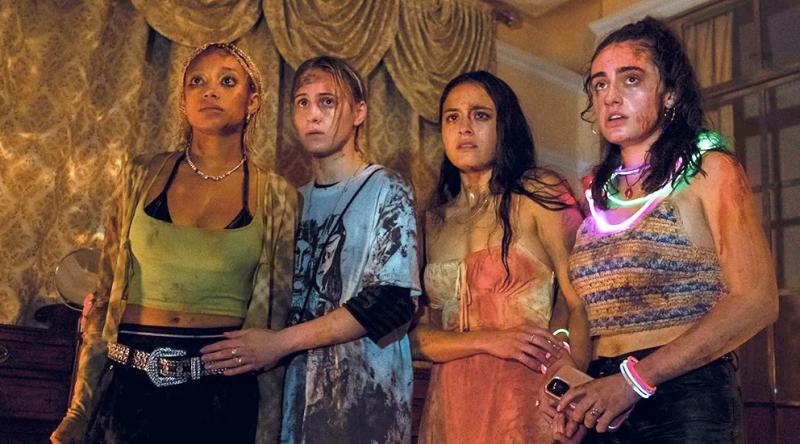 This year we will be treated to bloodthirsty zombies, sadistic murderers, strange creatures, evil specters, queer works Colorful, gripping investigations and lots and lots of unclassifiable genre-defying films. And this is precisely what makes the beauty of the Fantasia Festival, which will unpack its 26th edition on Thursday evening. But what to see? Where to start? Le Journal offers you its 10 favourites.

A bunch of young friques. A secluded mansion. A party in the middle of a hurricane. What could go wrong? Pretty much everything, of course! And that's exactly why we're dying to discover this new offering from Dutch filmmaker Halina Reijn, starring Pete Davidson, Lee Pace and Amandla Stenberg.

Romain Duris faces zombies in this horror comedy that made the Cannes Film Festival laugh and shudder last spring. In front of the camera of Michel Hazanavicius, the French actor becomes a filmmaker seeing the shooting of his film disturbed by a horde of living dead, thirsty for flesh and blood.

A disgraced content creator tries by all means to replenish his bank of subscribers. And he takes drastic measures to achieve this, choosing to spend the night in a haunted house and to broadcast live, on the web, the events that follow. At first glance, Deadstream reminds us of the excellent Hell House LLC trilogy, but with the humorous touch of the Evil Dead saga. In short, we certainly don't want to miss it.

The horror becomes more subtle, more pernicious in Hypochondriac, a film where a man remains haunted by the demons of his youth and the violence experienced at the hands of his bipolar mother. American filmmaker Addison Heimann uses his most recent feature to free himself from his past, while taking a queer and engaged look at horror.

Le thriller by Georges Simenon is making the leap from the page to the screen this summer. Here, Gérard Depardieu slips into the shoes of detective Jules Maigret for the time to elucidate the mystery of a young woman found dead on Place Vintimille, in the 9th arrondissement of Paris. It is also in the company of director and co-screenwriter Patrice Leconte that we can discover Maigret, the French filmmaker being expected for the North American premiere, in Montreal.

Suze and Arthur are married. Happy. Comfortable. But a sordid murder, committed by a band of mobsters, will destabilize their daily lives. Repressed emotions will suddenly come to the surface, forcing the couple to question their relationship and their sexuality.

The post-apocalyptic thriller Polaris we transports you to the heart of the Yukon, where a young girl and her adoptive mother – a polar bear, no less! – are separated by a horde of nomadic warriors. The images so far unveiled suggest a Mad Maxsnowy and, moreover, led by an all-female cast. This should get the festivities off to a good start, as this film has been chosen for Thursday's opening night.

One year later The Night House, Rebecca Hall reconnects with horror thanks to Resurrection. The British actress plays a single mother who sees her orderly life rocked by a man who has come to revive the torments of her past. And the most beautiful in all of this: it is the excellent Tim Roth who will embody this catalyst. That was enough to pique our curiosity.

After rocking Sundance earlier this year, it's Fantasia's turn to discover the mysterious Speak No Evil. We will witness a weekend in the Dutch countryside that will slowly (but surely!) turn into a nightmare when a couple discovers the true nature of their hosts. Judging by the trailer, chills are guaranteed.

On promises us with Swallowed a queer, transgressive and cheeky horror thriller. And knowing the track record of American filmmaker Carter Smith (which includes, among others, the excellent The Ruins and Jamie Marks is Dead), we know that he will fulfill each of these promises.