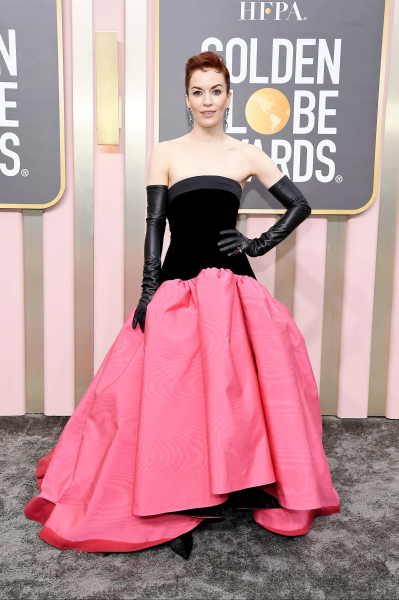 After a non-televised awards show last year due to various controversies, the Golden Globes returned to a more normal format on Tuesday night to honor the best performances of the year in film and on the television. For this first gala of the year, the stars went there with glamorous looks imbued with freshness. There was a good dose of theatricality, a long train for one, a voluminous cape for another or even cascades of ruffles.

It was all in leather that Jeremy Pope walked the gray carpet of the Golden Globes. A Cartier choker necklace and studded ankle boots completed her Dolce & Gabbana.

This green Prada dress, adorned with two buckles ending in a train, enhances the belly of mum-to-be Hilary Swank, who is expecting twins.

This two-tone silhouette by Bach Mai recalls the opulence of the 1980s. Actress Britt Lower completed the outfit with leather opera gloves and Reza jewelry.

Andrew Garfield preferred a terracotta suit from the Zegna label rather than a classic black suit. We also salute the audacity of the scarf shirt. His pose highlights his David Yurman ring and his Omega watch.

Dressed in a Dolce & Gabbana, Niecy Nash made a remarkable appearance with her voluminous cape draped over her shoulders. Note the pavé of stones in front of the dress which draws its silhouette.

Donald Glover continues to refine his casual look, opting this time for a Saint Laurent creation composed of a “ pajama ” structured with a tuxedo jacket and accessorized with Cartier jewelry.

Did Claire Danes want wink at Twiggy, the star model of the 1960s, by opting for this creation by Giambattista Valli? The silhouette, the color palette, the curl, the hairstyle, it was all there!

Michelle Williams opted for this whimsical yellow Gucci dress which, with its cascade of subtly shimmering ruffles, seems to give her a cheerful energy. She accessorized everything with Tiffany & Co.