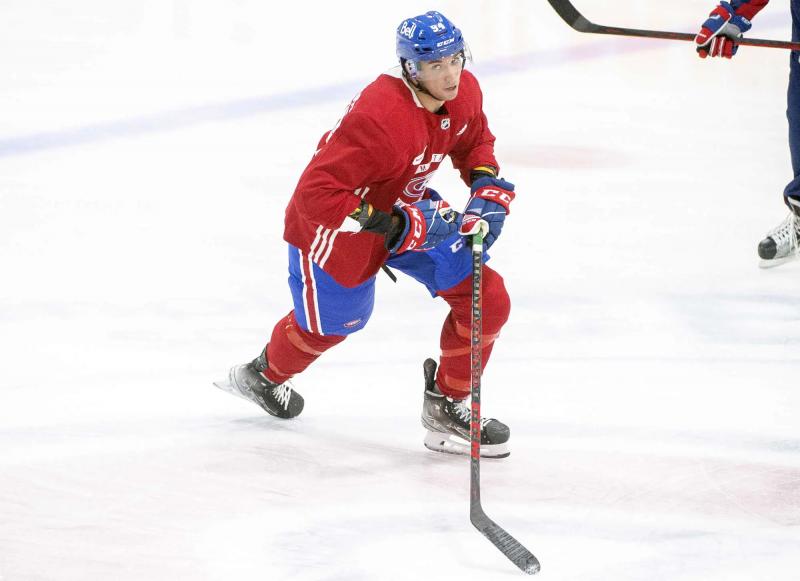 More than a year after being selected in the first round by the Canadiens, Logan Mailloux gave his first official outings in the organization on Monday. However, since he is recovering from a shoulder injury, it was before the rest of the group that the defender performed on the ice rink at the Brossard sports complex.

Anyone who has followed the activities of the Habs over the past 12 months will know the storm at the center of which the 19-year-old Ontarian has been embroiled by sharing explicit photos of a young woman with whom he had a sexual relationship.

Brought before the Swedish courts, Mailloux had asked that no team draft him during the 2021 auction. The former administration of the CH had ignored this request and had drafted him all the same, creating a real scandal.

Faced with the outcry, the Canadian had pledged to help Mailloux in order to ensure that he understood the consequence of his action.

During the season, while in the London Knights entourage of the Ontario Junior League, the guard underwent therapy and a plan with an academic and personal development counselor .

The Montreal organization went even further by holding a seminar with all the hopefuls present at its development camp. Sheldon Kennedy, founder of the company and himself a victim of sexual abuse in the junior ranks, as well as Bruno Gervais were the speakers of the group which carries out this type of meeting in all circles work and school environments.

Without this being the specific objective of their presence at the Brossard sports complex, the two former NHL players discussed with Mailloux. Gervais was greatly surprised by the development of the young man.

“It knocked me to the ground how much he is grounded. This is another topic delicate, but he talks about it. And the work that comes from him and the work that he is willing to do, it's impressive,” said the former New York Islanders guard.

“Just chatting with him, you see the journey he has made. His maturity struck me,” he added.

Obviously there will be always to bring back to the carpet the error that Mailloux made, when he played for a Swedish formation.

“There are not many people on this planet who have not made a 'error,' said Gervais.

Does he deserve redemption? asked a colleague.

“In my eyes, yes,” he replied. We are quick to want to throw these people into oblivion. If you want to educate yourself, you have to be able to see the person who made the mistake doing the work and learning so that you can become a positive impact. ”

“It's not not a question of excusing the gesture, on the contrary. But then we can move on,” he continued.

Gervais salutes Mailloux's desire to transform a negative event into a positive situation.

“ Perhaps he is the one who, at some point, will grab another youngster by the shoulder and bring him back before it is too late.

“I wishes him a long career.”

In addition, forward Michael Pezzetta and defender Corey Schueneman have agreed on the terms of a new contract with the CH.

The former signed a one-year, one-way deal that will bring him $750,000. The second has also affixed his signature to the bottom of a one-year pact. However, in his case, it is a two-part agreement.

In addition, the Habs had until 5 p.m. Monday evening to submit qualifying offers to players on the point. to become self-sufficient with compensation. The general manager, Kent Hughes, has complied with Kirby Dach, Samuel Montembeault, Cayden Primeau, Joël Teasdale and Nate Schnarr.

So that means that Rem Pitlick, Kale Clague and Josh Brook will become free as air Wednesday.