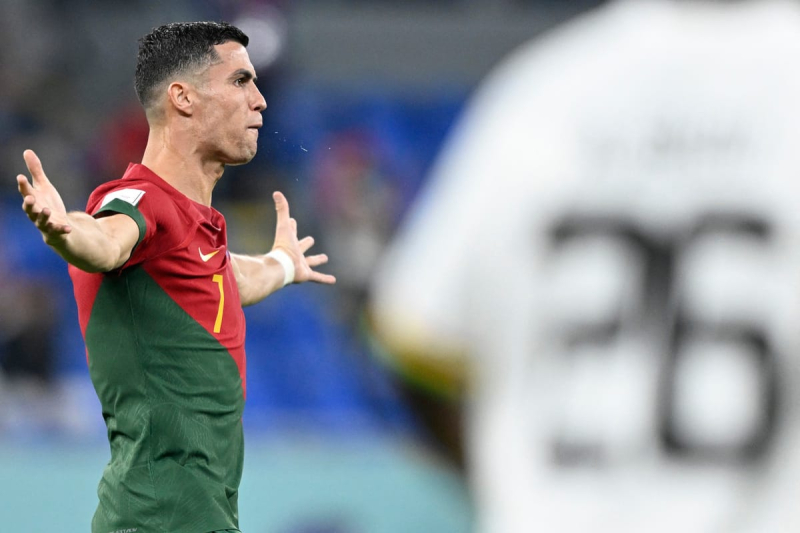 Without a club since choosing to part ways with Manchester United after a rocky last few months, Cristiano Ronaldo put a balm on his year 2022 by being Portugal's first scorer at the FIFA World Cup. soccer in Qatar on Thursday.

The 37-year-old striker, who made headlines after criticizing his manager and the English club's bosses, remained very focused on his country's goal against Ghana. In tears as the national anthem was played, Ronaldo waited until the second half to get going.

Off balance by a Ghanaian defender in the box, the star player got the grace of the arbitrator. He did himself justice by shaking the ropes on his penalty shot in the 65th minute of play.

Ronaldo thus became the first man to score in five consecutive Worlds . He now has eight goals in this competition.

Ghana temporarily leveled the score in the 73rd minute when André Ayew completed the play of Mohammed Kudus. The African country was however quickly brought back to earth, as Joao Felix and Rafael Leao hit the target moments later.

Osman Bukari (89th) gave the Ghanaians hope after the exit of Ronalo (88th ), but Portugal resisted in stoppage time. It was the Seleçao's first victory at the opening of the World Cup since 2006.

Cristiano Ronaldo opens his account in the group stage against Iran by scoring Portugal's second goal against Iran (2-0), on a penalty. The Seleçao, vice-champion of Europe two years earlier, will go to the semi-finals, beaten by France (1-0). But the young Manchester United rising star, then 21, would not score again.

The tournament marks the final handover between Figo, who will retire from international football after this World Cup, and Ronaldo.

Ronaldo, with his first of his five Ballons d'Or in his pocket (2008), scored just once again in South Africa. He signs a goal gag in the group stage against North Korea (7-0), the ball having rolled on his neck and his head before returning to his feet, in front of the empty cage…

But Portugal remains silent during the two other matches against Brazil and Ivory Coast (twice 0-0) and falls in the round of 16 against Spain (1-0). Bitter defeat for the star then playing at Real Madrid: “How do I explain it? Ask Carlos Queiroz the question”, the Portuguese coach, he cursed after the elimination.

Ronaldo had brought Portugal all by itself at the World Cup by scoring the four goals of its selection in the play-offs against Sweden (1-0, 3-2).

In Brazil, in a strong group, Portugal is however humiliated from the start by Germany (4-0), with a transparent Ronaldo, and eliminated in the first round despite a useless final victory against Ghana (2-1) . CR7 scores the winning goal against the “Black stars” but does not celebrate this only goal of a failed World Cup.

In Russia, Ronaldo started strong by making the Olympic Stadium in Sochi his garden with an exceptional hat-trick that was remembered against Spain (3-3). He then becomes the oldest player (33 years and 4 months) to score three goals in a match in the World Cup.

Ronaldo then continues with another goal against Morocco. But this World Cup in his hand skids again in the round of 16 with a defeat against a realistic Uruguay (2-1). A Celeste whom he finds again this year in Qatar.

In Qatar, Cristiano Ronaldo started the competition in the unusual shoes of a player without a club after the officially announced divorce from Manchester United, two days before Portugal's debut against Ghana.

Ronaldo s is invited himself in front of the press the day before to ensure that the open conflict with the Red Devils “would not shake” the Portuguese selection. He, in any case, shows that he remains focused on the field with this first goal against Ghana, scored on a penalty which he himself obtained.

Despite some attacking talent, Uruguay and South Korea drew 0-0 on their Qatar debut in Group F at Al-Rayyan Stadium.

Suffering from a broken left eye in early November, South Korea's star striker Son Heung-min was in the starting lineup. Recently operated on, the Tottenham striker wore a protective mask. The supporters were also scared when the player lost his shoe following a strong tackle from Martin Caceres.

It was interesting to see his duel with forwards Luis Suarez and Darwin Nunez on the side of the representatives of South America, but none of these tenors hit the mark.

The most dangerous action finally came from a defender, Diego Godin. From the height of his 36 years, the Uruguayan with 160 caps made his science of heading the game speak on set pieces, but the post pushed back his attempt in 43rd minute.

Switzerland dealt a severe blow to Cameroon's qualification dreams, beaten 1-0 in Doha in a Group G of the 2022 World Cup very tough with Brazil and Serbia.

It was the eighth defeat in a row at the World Cup for the Indomitable Lions, who lost on a goal from Cameroon-born striker Breel Embolo. He celebrated his goal as modestly as possible, throwing his arms up in celebration, palms forward in apologies.

After Embolo's 48th-minute goal, the Cameroonians had little more dangerous, like the other African selections until now.

“We played with a lot of maturity, observed the coach of the Swiss, Murat Yakin. We are a team that knows each other well, that has been playing together for a long time”.

Switzerland will now be waiting for their next opponent, Brazil, who will face Serbia later in the day.