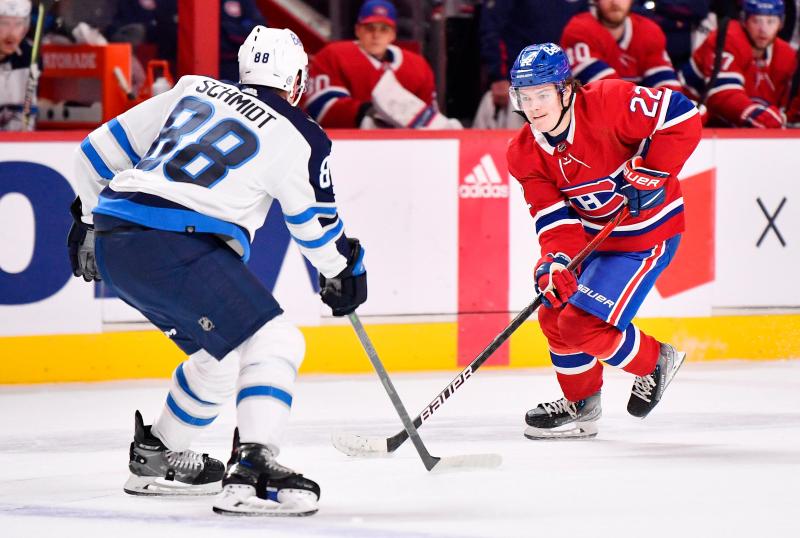 If Cole Caufield ever has a 30-35 goal season with the Canadiens, what could his salary requirements be?

We can think of an annual average around $6 million… and maybe more.

Over the past few weeks, a few teams have awarded huge contracts to their young people identified as skaters who can make a difference.

And Caufield belongs to this group capable of being part of the solution.

His first shots in the National League convinced the skeptics, those who seriously questioned his size. Can he succeed in a sport where the athletes are bigger and faster?

He has shown that he does not suffer from any inferiority complex. On the contrary, he likes to provoke the opposing defensive brigade. He loves competition, he wants to compete with the best in his profession and allow his team to achieve amazing results.

And people appreciate him.

General manager Kent Hughes took a short break from work to participate in the Canadiens golf tournament on Monday in Laval.

Kent Hughes knows very well what awaits him. The CEO of CH has lived on both sides of the fence. As an agent, he had to sell his client. He prepared a host of comparisons to justify the salary demands.

He also had several arguments to convince a CEO that he was about to make a good deal.

In his new role, Hughes concocted a plan with Jeff Gorton. The two decision makers of the Canadian respect a business model focused on the development of young people, a new culture and an administration that will not be afraid to take risks to achieve its objectives.

When they arrived, one of the important jewels of the dealership, Nick Suzuki, had just accepted an eight-year contract. Their mission is therefore to supervise their new captain with top-notch staff and to clean up veterans who no longer have as many resources and receive distorting salaries.

Caufield fits perfectly in the image that the Habs want to project.

He forms a dynamic duo with Suzuki. He is a player who has earned the respect of his teammates. He shows up in every game, he has ambition and, above all, he bets on a coach who, with the same size as Caufield, has had an exceptional career in the National League.

The 21-year-old American will become a restricted free agent at the end of the next season, but we can bet that an agreement will be reached before reaching the deadline.

If we put in the shoes of Hughes, we would like to be more reassured about the next investment that we are about to make. But Caufield has left a good calling card so far and the goals scored in the second half of the last calendar can take away much of the worry.

It therefore remains to establish a price.

The example of DeBrincat

It also remains to be seen what Caufield and his advisers covet. Do they want to partner with CH for seven or eight years? Do they want to imitate Alex DeBrincat and opt for a bridge contract? The ex-Blackhawks player had preferred a short-lived pact knowing full well that Chicago would inevitably embark on a recovery process.

This is also the case for the Canadian with the difference that in the process initiated by Gorton and Hughes, Caufield plays a leading role.

So, if he ever has a season at the expectations, what will be the price to pay?

Can we think of an agreement similar to that of Suzuki?< /p>

The latter is a versatile skater. He is given several responsibilities, both offensively and defensively. It can evolve in several strategic situations.

Caufield doesn't have as much responsibility… except his main quality is scoring goals.

Would $6.5m be a reasonable figure?

But then again, will Caufield opt for a multi-campaign deal?

The 24-year-old winger surely does not regret making such a decision.

The trend now is for teams to take advantage of a favorable environment allowing them to release millions of dollars. The new agreement with the American broadcasters provides great financial opportunities.

Also, the general managers were informed that the salary cap could increase more quickly than expected due to NHL revenues.&nbsp ;

Take the example of the Ottawa Senators.

Two years ago, they awarded Thomas Chabot an eight-year contract. Last year, they teamed up with Brady Tkachuk for seven seasons. This summer, GM Pierre Dorion did not hesitate for a moment to retain the services of Josh Norris and Tim Stützle for the next eight seasons.

We are sending a clear message to the supporters who, during the last campaigns, have deserted the amphitheater in the face of the repeated failures of the team. The decisions made by the management have regained the confidence of a clientele once spoiled by the exploits of Daniel Alfredsson and company.

Dorion plays all-in. He believes Chabot, Tkachuk, Norris and Stützle will get the Senators a playoff bye.

Doug Armstrong, the big boss of the St. Louis Blues, is following the same path as Dorion.

In July, he awarded Robert Thomas an eight-year, $65 million contract $. And now on Tuesday, Jordan Kyrou accepted the same salary conditions as his teammate.

But the two general managers will have to engage in an even more difficult exercise. That of giving flexibility to their payroll. Veterans will have to suffer the consequences.

This also applies to Kent Hughes and the CH.