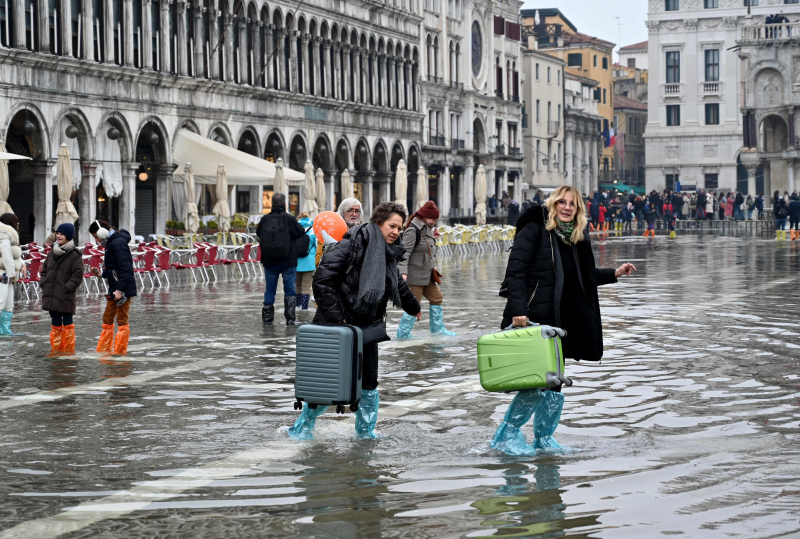 Will Venice be swallowed up by the waves in 2100? To avoid this catastrophic scenario mentioned by scientists, the City of the Doges is trying to raise awareness among younger generations about the protection of the lagoon, a very fragile ecosystem threatened by climate change.

The “acqua alta”, a particularly high tide, regularly floods the famous Piazza San Marco, a phenomenon that entertains tourists but jeopardizes the foundations of the old palaces of the Serenissima, listed as a UNESCO World Heritage Site.< /p>

If Unesco had threatened in 2021 to put Venice on the list of world heritage in danger, the lakeside city escaped it in extremis thanks to the ban on large cruise ships from entering the heart of the lagoon.

To contribute to the safeguard of Venice, Unesco, associated with the luxury group Prada, launched an initiative on Tuesday aimed at introducing young students aged three to six to the secrets of the lagoon.

The island of Torcello, located north of the lagoon, with its salt marshes whose shores are eroded by the waves caused by motorboats, was the scene of the first outdoor lesson of this educational program called “Lagoon Kindergarten”.

Fish made from recycled papier-mâché, samples of sea water, drawings reproducing the colors of nature… the small group of around forty enthusiastic five-year-old children tried to appropriate the lagoon.

“We want children to learn to observe nature and the lagoon, to learn to know it, to love it and to better protect it,” he told AFP Francesca Santoro, coordinator of the Unesco Ocean Literacy Program.

This educational project is considered useful by Georg Umgiesser, director of research at the Institute of Marine Sciences of Venice (ISMAR-CNR), because “it is not enough to show simple graphs illustrating the rise in sea level

“As a result of Venice's land subsidence and sea level rise, mean sea level has risen by 30 cm in the past 150 years and is expected to rise even more 50 cm by the end of the century,” he told AFP.

St. Mark's Square, which is located in the lowest part of the city, is the first to be flooded, and “in 2100, half of Venice risks being under water”, fears this German oceanographer who lives in Venice for 40 years.

Since October 2020, a system of artificial dikes called MOSE (Moses in Italian), is triggered as soon as the rising waters of the Adriatic Sea reach an alert level of 110 cm.

This system, developed in the 1980s, before global warming accelerated, will it be sufficient to prevent the engulfment of Venice?

According to Mr. Umgiesser, this mechanism risks reach its limits. “The MOSE was designed to shut down a maximum of 50 times a year. If the rise of the sea continues at this rate, from 2100, it would have to be triggered 300 to 400 times a year”.

At that time, the lagoon would in fact be closed, which would prevent the exchange of water with the sea, which is essential for preserving biodiversity.

Another solution remains, which would consist in “ raise the terrain of Venice by 30 to 50 cm by injecting seawater into its basement,” he explains. But such a scenario is still far away.

In the meantime, Jane da Mosto, director of the environmental NGO We are here Venice, is banking on salt marshes to slow down the acqua alta and attenuate the currents, by as natural barriers.

Restoring these wetlands, decimated by climate change and urbanization, would be, according to her, a natural solution to save Venice and its lagoon.

“C It's a race against time. We must act now. We are in a climate emergency, the disaster is already happening,” she warned.