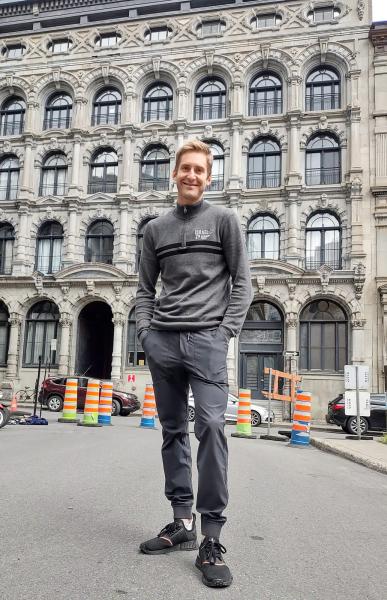 Returning discreetly to Quebec at the beginning of the week, cyclist Hugo Houle realizes that it is now more difficult for him to go incognito since his historic victory in the Tour de France.

In a small, narrow street in the Old Port of Montreal, the 31-year-old athlete agreed to take a few photos while passers-by known neither to Eve nor Adam shouted his name.

Waiting the Quebec and Montreal cycling Grands Prix, Houle says the same situation happened in the Drummondville area, where he got on his bike to train. Everywhere, he has not gone completely unnoticed since his brilliant coup in Foix, on July 19th.

“There was a work zone and if I had wanted to, I think the workers would have taken me into the backwater to help me cross! Of course, people's perception has changed. I feel that there is a certain admiration. There are situations that did not happen before “, launched the first Quebecer to win a stage of the Tour de France in 109 years.

His historic victory at the Tour de France in Foix on July 19.

Wishing to focus on his training to deliver a great performance next week, the cyclist offered himself a short media tour on Thursday, accompanied by his mother, whom he had not seen for a year. His spouse Stéphanie, for her part, remained in Europe.

Six weeks after her feat, Houle has still not fully watched the finest moment of her career.

“Not fully. Just the highlights and a summary. I did not put the official step in full. One day I will. The video made by our team is really great! When I get to the line, it's impressive. The images speak for themselves,” he adds with a lot of emotion and broken voice.

Even if he doesn't really know what to expect, Hugo Houle should be treated to a warm welcome in the streets of Quebec and Montreal on September 9 and 11. “I can't wait to see people,” he says.After the Tour de France, he took a short vacation before finishing 2nd in the Arctic Race in mid-August in Norway. Victory in the final standings eluded him by just 8 seconds.

Last Sunday, he did not participate in the Bretagne Classique, the former Grand Prix de Plouay, due to gastric problems. The Belgian Wout van Aert (Jumbo-Visma), who won the event, should logically be the big favorite for the two Quebec races. Houle will not have raced for three weeks, but he believes in his chances.

“I was tired. I can't train anymore. I have to stock up on freshness. Since the Tour de Suisse in June, it hasn't stopped. I want to do well at home and I'm ready, but I've already had a great season and I don't want to put too much pressure on myself,” Houle summed up.

Israel-Premier Tech in a precarious situation

A few weeks before the end of the season, the Israel-Premier Tech (IPT) team of Quebecers Hugo Houle and Guillaume Boivin could lose its precious World Tour license in 2023.

If this delicate situation could recover at the beginning of summer, hopes have melted and nervousness is greater.

Israel-Premier Tech (IPT) is currently in 20th place, several hundred points from 18th and last place avoiding relegation. A 19th place could allow you to be automatically invited to the Tour de France, Italy and Spain, but this is not currently the case. The points accumulated over the last three seasons are counted.

“I'm not in a panic, but there are some who are. I performed well and I can't do more. I did my part and everyone knew the rules of the game. It's to be followed,” explains Houle cautiously.

< p>Good results become important, even mandatory, in Quebec and Montreal, but also in each race on the calendar until November. In addition to Houle, IPT will bet here on Guillaume Boivin, Jakob Fuglsang, Simon Clarke, Giacomo Nizzolo, Sep Vanmarcke and Krists Neilands.

Time could run out, however. In case of failure, runners could leave for other skies.

This situation would be disastrous since the team is well supported by two serious businessmen with deep pockets.

Philanthropist Sylvan Adams and Premier Tech CEO Jean Bélanger have built a solid partnership with a long-term vision, which is not the case for several teams constantly looking for sponsors to survive. IPT is also involved in the development of young hopefuls.

Cyclists everywhere are aware of the necessary UCI points and the emergency has modified ways to run. A debate with the International Cycling Union (UCI) is likely to be expected this fall.

In 2022, a wave of COVID cases and injuries broke the team's momentum, but a few riders did not deliver the expected performance. Despite a good Tour de France, the team hasn't had any results in the Vuelta so far.

Houle will have a very busy autumn himself in order to save the day. Immediately after the Montreal Grand Prix on September 11, he must take an evening flight to Brussels for a scheduled event in Belgium. He will skip the Worlds in Australia.