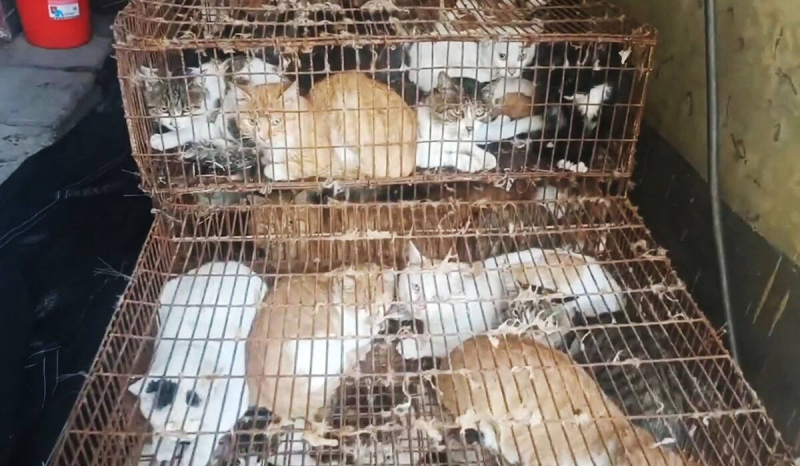 The felines were crammed into rusty cages when they were discovered by police in Jinan city, Shandong province, the US-based association said in a statement on Tuesday.

< p>Sparrows were placed in cages as bait and a remote control was used to close the traps as soon as a cat entered, explained an activist from VShine, a local animal rights association.

< p>“It was shocking to see the state they were in. Many of them were emaciated,” said Mr. Huang, another activist, quoted in the HSI statement. “Our discovery of dozens of live sparrows being used as bait to attract cats was also a big shock.”

Most of the rescued felines are believed to be pets and were sent to shelters after their rescue, according to the statement.

Activists also found 31 sparrows – a protected species in the country – and released them into the wild.

China has no specific law to punish animal cruelty. But suspects could be prosecuted for hunting birds, stealing cats or breaking animal disease prevention rules.

According to HSI, approximately 10 million dogs and four million cats are killed for human consumption every year in the country.

Every year in June, the city of Yulin, in the province of Guangxi (south), organizes a dog meat festival on the occasion of the summer solstice. Cats are also sold there to be eaten.

These meats, however, remain very little consumed in China. They are mainly in certain areas of the southern provinces of Guangdong and Guangxi. Consumption has seen a steady decline with the increase in the number of pets.

China banned the consumption and trade of wild animals in 2020.

Cities Shenzhen and Zhuhai (south) in Guangdong have banned the consumption of dogs and cats since April. They became the first in China to take such a step.