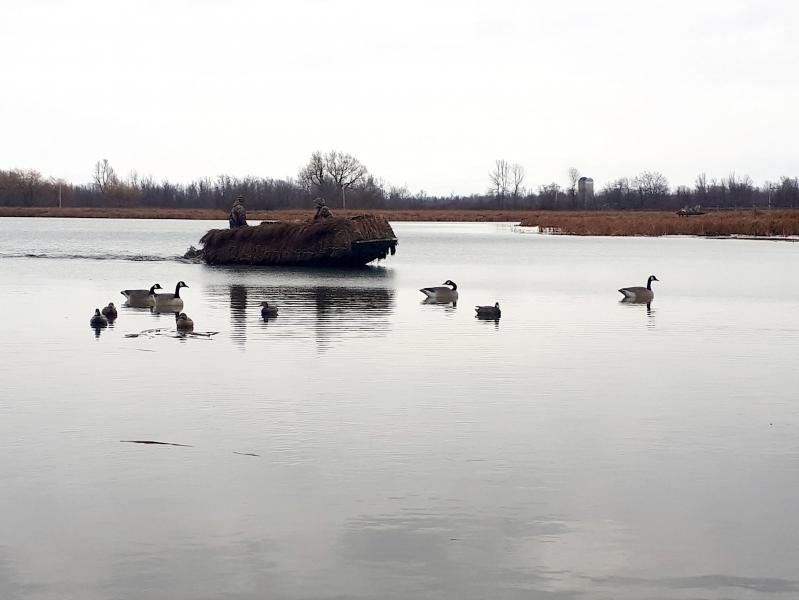 Since September 24, it has been possible to collect these large migratory geese elsewhere than on agricultural land.

The bustards, as they are commonly called, saw all the colors from September 6 to 23 in the fields, and they are starting to be more suspicious of the various subterfuges put in place by the nemrods. A little change of scenery is fun and adds to the challenge.

Michel La Haye is an old hand in the field of migratory birds. In addition to making decoys and teaching the art of decoy, he is the owner of the guide service auvaginemlh.com.

I have often heard this enthusiast talk about the various facets of hunting Canada geese during his lectures.

He often alluded to the day dormitory. I asked him to please share his knowledge on the subject with the readers of the Journal. Here is the essence of his explanations.

Michel guided the duck for many years above the great bodies of water in Quebec and Ontario.

“I always managed to be located in a good place both for duck passing in the early morning and for hunting geese later in the morning. I chose magical locations, day roosts, as I call them, where the game comes and goes all day,” says La Haye.

Generally, during the stops they do during their migration, these birds normally move between two points on a daily basis, between resting areas and feeding areas.

The thrill-seeking hunter must find the roosts.

These are foraging sites – or gathering sites, if you prefer – where the ducks will spend the night safe from predators, such as in a large open bay or a widening of a river.

< p>The fancier should also locate secondary feeding or feeding areas such as day roosts, where the birds spend the day waiting to return to their feeding area in the afternoon.

You may also want to identify movement corridors between these last two sites.

In agricultural land, ducks are less likely to make long journeys like those of geese between the daily feeding site and the night roost.

Ducks are therefore found more frequently in this type of daytime resting environment, unlike geese, which generally prefer to return to the dormitory at night after each of their outings. This is what Michel calls a day roost.

Near large bodies of water, geese tend to frequent a day roost, often more open than those at night, before heading out to the fields at the end of the day and returning to the night roost at sunset. Ducks are more early-morning than geese and some groups will congregate in the same daytime roosts as geese. Therefore, you can perform a nice mixed hunt.

“Except at the end of the season, when you are certain that these roosts will freeze over the following days, you must avoid at all costs disturbing the geese and ducks in their night roosts, otherwise they will be disorganized and will probably decide to continue their migration. Remember that at our latitudes, most waterfowl populations are only transient in the fall, in transit to their winter habitats,” says the expert guide.

If you don't want to hunt ducks, you can wait an hour after sunrise to prospect and unearth your site for the next day, and sometimes the same day if many geese frequent the place. You can also set up in such a location by first scaring away the geese gently with your boat, without firing.

You then position your decoys and camouflage your boat quickly. All you have to do is wait for them to return in small groups.

For hunting, if you don't have a retriever dog, it is imperative to harvest the intercepted birds effectively, is even a legal obligation. A fully camouflaged hunter-type boat – often called a duck boat – is ideal for this hunt.

Decoys have two main functions: to attract the attention of geese in the distance to then entice them to land, and then to fly over a deadly shooting zone at the best possible angle.

In a dormitory by day already frequented, a few floating decoys accompanied by a pair or two of field lures set up near the shore will do the trick. Arrange them leaving plenty of distance between individuals and crowds to imitate birds at rest and in confidence. Form three small groups with an opening in the center, directly in front of your craft or hide.

If you are more passing hunting in a flight corridor, have at least four dozen decoys floats with a good number of shore decoys. You can add a few dummy ducks if you want to do a mixed hunt.