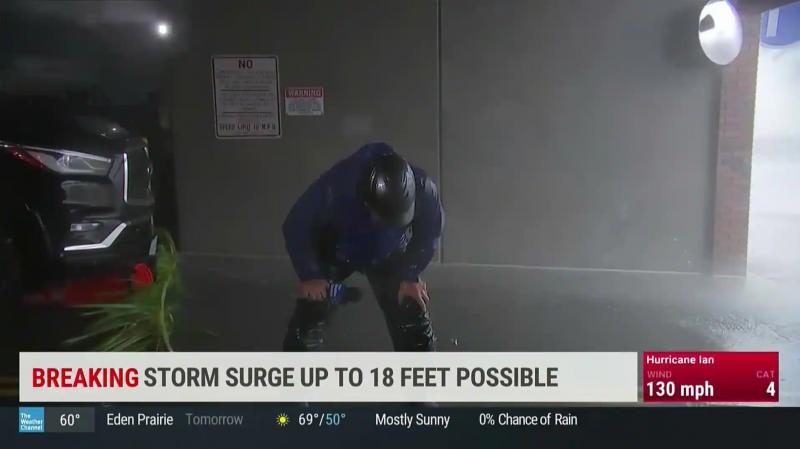 There Jim Cantore arrives, the evacuation order comes in stride. It is that the star weather presenter of the American channel “Weather Channe” is a real bird of misfortune, but also, and above all, an experienced meteorologist ready to take all risks to inform Americans.

First of all, we hope he is doing well, because he has been receiving a lot since the arrival of Ian from Florida.

Ian's winds and record storm surge pose a dangerous threat for those living along Florida's west coast, as well as for those covering this monster storm. @JimCantore of the @weatherchannel experienced the dangers of covering a storm this large firsthand in Punta Gorda. pic.twitter.com/OlEWaNNTYT

By really, I mean REALLY.

Absorb the contact, and make a play! Jim Cantore is putting up big numbers out there in #HurricaneIan #WeathermanSuperbowl pic.twitter.com/4UYfbmXHMp

Obviously, this kind of behavior is the source of all kinds of same on the internet.

Beyond these striking videos and funny images, the presenter is adored by Americans for his ability to popularize the whims of Mother Nature, as USA Today reminds us in a long file today.

Known as America's first Weather Channel tornado chaser, Jim Cantore has served as the Atlanta-based network's most recognizable personality for over 35 years.

He has been involved in all the weather disasters that have affected Uncle Sam in recent decades: Sandy, Harvey, Katrina, etc. Everyone has experienced the passage of this harbinger of bad omens for the local populations.

For the President of the Weather Group, Nora Zimmet, Cantore never wanted to be a celebrity. She tells USA Today that he's simply a “super cool, super smart, weather-obsessed science nerd.”

Originally from Connecticut, having grown up in Vermont, working mainly in Atlanta and wandering where the weather is not good, Cantore also serves as a presenter for the bulletins of the American Weather Channel and is therefore often where we should not be.

Then comes the question that everyone is asking, how does this presenter manage to stay alive despite all this risk-taking?

He explains to USA Today that he has never been seriously injured, and that all necessary precautions are nevertheless taken to keep him and his crews safe.

Apart from all of these hurricanes, this seasoned journalist has also covered the deadly tornadoes in Moore, Oklahoma, and Joplin, Missouri. It may also cover the return of this cat and its master to the house, another highlight video of the day.

Ian is only just beginning to wreak havoc in Florida, and, as scientist Gary Lackmann reminds the AFP, “A consensus remains that there will be fewer storms in the future, but that the most important ones will be more intense”.