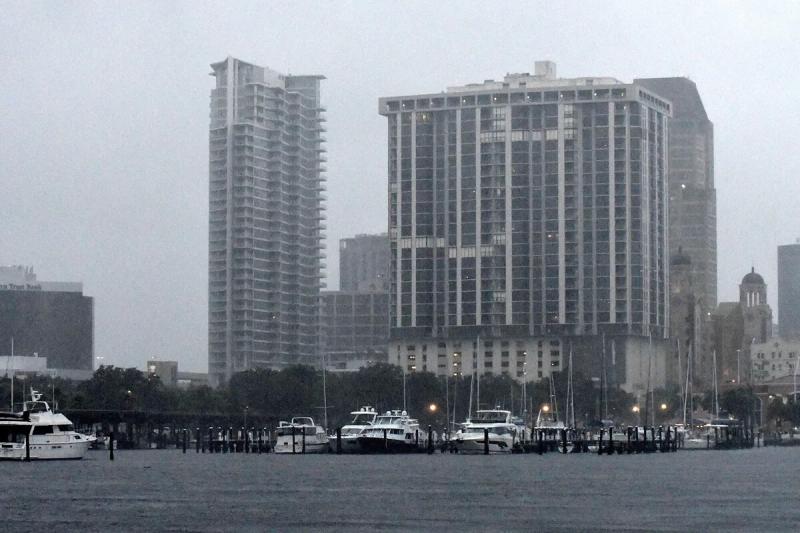 PORT CHARLOTTE | Florida was anxiously awaiting the day's arrival of Category 4 Hurricane Ian on Wednesday, which is “rapidly intensifying” and could lead to “catastrophic” consequences according to the American weather services, after devastating western Cuba.

Ianis expected to cause “catastrophic sea floods, winds, and flooding in the Florida peninsula”, estimates the National Hurricane Center (NHC) in its latest bulletin.

Carrying sustained winds of up to 250 km/h and even “higher” gusts, Ian is heading for the west coast of Florida where he is expected in the early afternoon local time. The hurricane is then expected to “move overland” during the day, and “emerge over the western Atlantic by Thursday evening”.

Between 30 and 45 cm of precipitation is expected in central and northeast Florida, and up to 60 cm in some places, according to the NHC.

“This is a major storm” , Florida Governor Ron DeSantis said Thursday morning at a press conference, warning that Ian could make landfall as a Category 5 hurricane, the highest category on the Saffir-Simpson scale. /p>

“Clearly, this is a very powerful hurricane that will have far-reaching consequences,” he argued.

Evacuation orders were given overnight for about ten counties on the coast, and according to Ron DeSantis these were generally followed in these very sensitive areas, “but perhaps not by everyone”. /p>

Warning that the day was going to be “very, very difficult”, the governor asked people not to go outside during the passage of the eye of the hurricane.

< p>“There is actually a calm when the center of the hurricane is above you. Do you think the storm has passed? This is not the case. It is still very dangerous.”

On Tuesday, Joe Biden also warned that Ian “could be a very violent hurricane, whose The impact would be devastating and life-threatening.”

The US President has already approved federal emergency assistance for 24 of Florida's 67 counties.

“The closer he gets, the higher the anxiety obviously rises with the unknown,” observed Chelsea Thompson, 30, who was helping her parents secure their home Tuesday in an evacuation zone southwest of Tampa.

Activity is interrupted in areas where the hurricane is expected. Tampa airport, for example, suspended its operations late Tuesday afternoon.

According to the Pentagon, 3,000 National Guard men are mobilized in Florida, with 1,800 others on the way.

NASA had given up the takeoff scheduled for Tuesday of its new mega-rocket for the Moon, from the Kennedy Space Center in Florida.

The hurricane, then a category 3, had previously struck Cuba on Tuesday, devastating the west of the country for five hours before heading towards the Gulf of Mexico, according to the Cuban meteorological institute Insmet.

Two people have been killed in the western province of Pinar del Rio according to Cuban state media and the island has been plunged entirely into darkness.

As the surface of the oceans warms, the frequency of the most intense hurricanes, with stronger winds and greater precipitation, increases, but not the total number of hurricanes. Hurricanes are also spreading in areas hitherto spared. According to the IPCC (August 2021 report), the proportion of particularly intense hurricanes (category 4 and 5) should thus increase by 10% compared to the pre-industrial era with a warming of +1.5°C, 13% at +2°C and 30% at +4°C.

In particular, they pose an increasing risk to coastal communities that are victims of wave-submersion phenomena (also called submersion marine) amplified by sea level rise, causing flooding and salt contamination of land and fresh water.

Due to sea level rise and submersion, more than a billion people will live in coastal cities at risk by 2050, according to the IPCC