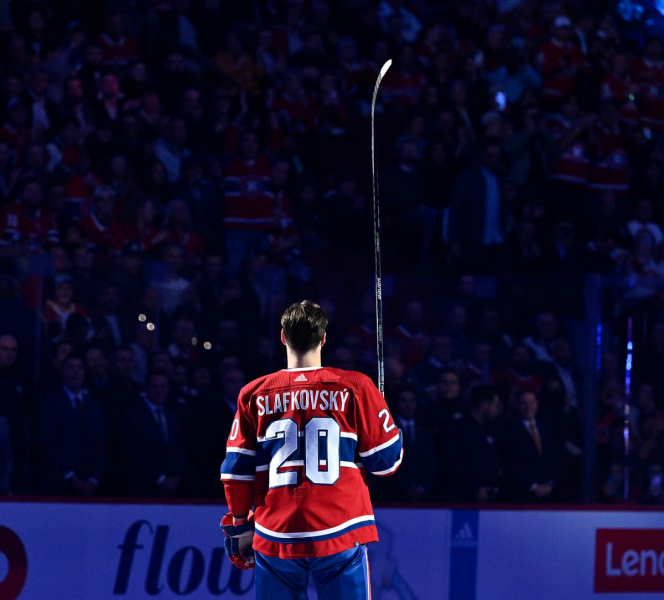 Juraj Slafkovsky's eyes light up as he describes the Bell Center crowd. For his first two games in Montreal, Slafkovsky had two wins, 4-3 against the Maple Leafs and 3-2 in overtime against the Penguins.

“It was crazy , the atmosphere, when Cole Caufield scored the equalizer late in the third period, he said, to a handful of reporters. I had chills when the host announced his goal. And it was even louder after Dach's winning goal.”

“I have no choice now, I will have to score my first NHL goal in Montreal,” he continued, bursting out laughing. I want to know that feeling.”

The 2022 draft class leader still hasn't put his name on the scoresheet after four games. He fired a single shot on goal, he hit a post against the Capitals in Washington and he got a very modest playing time with an average of 10 min and 41 s.

Used on the left wing of the fourth line in the company of Jake Evans and Mike Hoffman during the visit of the Penguins, Slafkovsky does not find himself in completely unfamiliar territory in a more limited role.

“Yes, c It's a challenge, but I had this experience last year when I started with the TPS [Turku] team, he recalled. I wasn't playing a lot, but I got better eventually. I feel like it will get better and better for me. I have to fight for my place. I think if I make good little plays, I can help the team win.”

Against Ovechkin and Crosby

Always very spontaneous in interviews, Slafkovsky did not hide the fact that he found it special to share the same ice cream with Alexander Ovechkin and Sidney Crosby over the past few days.

“It's kind of surreal,” he said. I was calling friends to tell them that I was getting ready to face Crosby on Monday and that on Saturday I was playing against Ovechkin. It's like a dream. It feels like I'm in the NHL game on the PlayStation 4. But that's real life. I take advantage of every second I have in this league.”

In his first season in Montreal, Nick Suzuki also needed patience before moving up the ladder. Aged 20, not 18 like Slafkovsky, the Ontarian had taken his first steps on the right wing of a fourth line.

“It's hard to play in this league at a young age, even more so at 18,” Suzuki said. I think he does a good job. I know he is tough on himself and would like to produce offensively. I have already been through what he is going through. I didn't play much when I started. You have to earn the trust of the coaches. It will come. He must remain patient. I spoke to him a few times to tell him that the points will eventually come. He just has to work hard and that's what he does.”

Slafkovsky smiled again when reminded of his captain's comments about his overly critical self-criticism .

“Yes, I can be hard on myself,” he replied. I like to win and I want to play well. It's my mentality to be hard on myself. But there are times when I have to learn to calm down. > “All the players are very smart in this league. They know where to position themselves on the ice and they know the right places to block the lines of shots or passes. That's the reality of the NHL.”