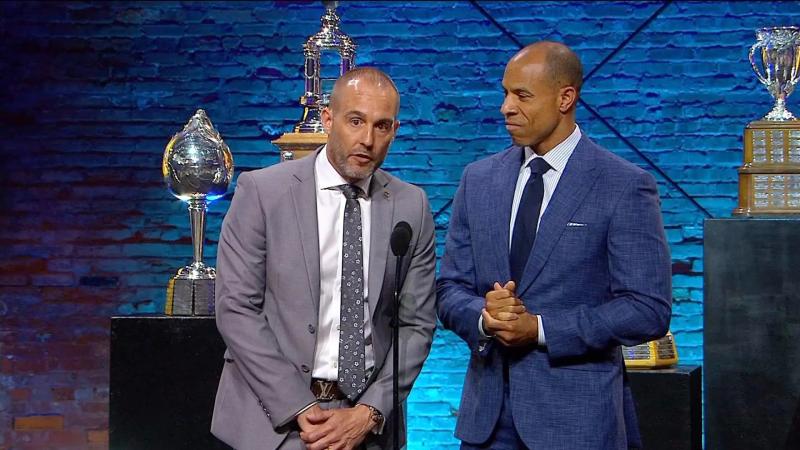 TAMPA | Respect and tributes have been showered on Guy Lafleur's family since his death on April 22nd. Tuesday evening, as part of the NHL trophy presentation banquet, Martin Lafleur was able to add another event to this long list.

The eldest son of the Blond Demon was invited to present the Ted Lindsay Trophy to Auston Matthews, voted the Bettman Tour's Most Valuable Player by his peers.

Last season, the Toronto Maple Leafs center impressed by scoring no less than 60 goals in 73 games.

“It's another great honor for our family. , commented Martin Lafleur, joined earlier in the day. The NHL could have done with a tribute video, but they decided to get us involved and we are grateful to my mother, my brother Mark and me.

Three for the Demon blonde

For the son of the former number 10 of the Canadiens, the Nordiques and the New York Rangers, the fact that the organizers of the evening have asked him to present this award has a special cachet.

“This is the one the players vote for. It is they who determine which is the most useful among them. It means that the other players on the circuit had a huge respect for my father,” he said, explaining in the same breath that he was approached three weeks ago.

A balm for the heart

Martin Lafleur has been busy since the death of his father. Since this morning, he has been back home to Niagara Falls where Guy Lafleur will receive, along with Kim St-Pierre and Lanny McDonald, the Order of Hockey in Canada at an event to be held today and tomorrow.

“How tall my father was, I got to know about that. I was brought up there. But what touches me the most is to see how much he marked people as a person, said Martin. The time he gave, the causes he supported, the events he attended, the autographs he signed. That's when I realized he was a great person.

“Good players, players who mark their era by what they do on the ice, there are has always had and will continue to have in all decades. It's seeing how much people appreciated him and loved the man he was that warms our hearts,” he added.

Testimonies of affection that warm the heart and help to soothe the mourning that is still heavy to bear.

« It's still a bit difficult because that his departure has created a great void. But we try to continue a little bit, in a way, his work.