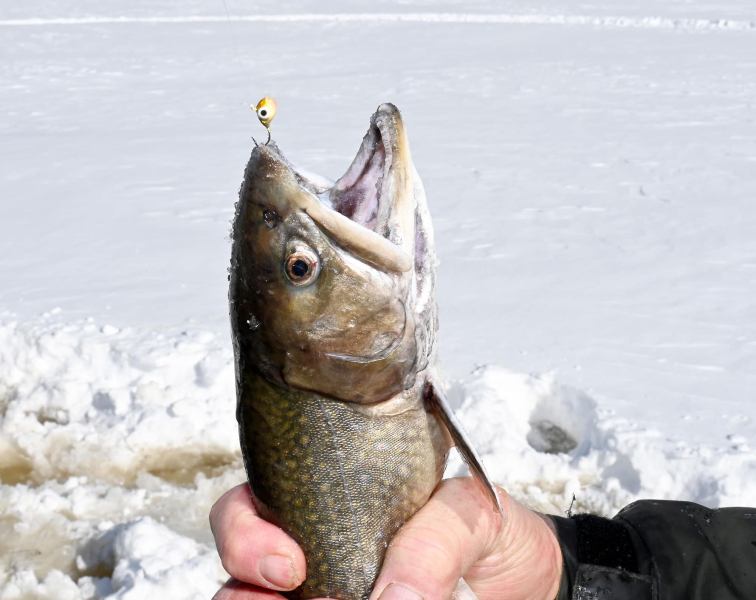 The time to tease the various species of fish under the frozen crust is in full swing.

To help you catch even more specimens, and bigger ones, here are some approaches that have proven themselves over time and successful techniques.

When you try your luck through the ice, exploit the entire column of water, from the depths of the abyss to the surface, before changing holes. Several species migrate throughout the day and reposition themselves at different depths.

When you install your five or ten keels near a structure, make sure they are positioned at various levels of depth.

Near a slope, for example, place them from the bottom of the drop to the top of the tray. With such a layout, you will cover all of the various attack zones.

Many specimens move in flocks. When you lower your offering into the icy orifice and perch, trout or other specimens happen to pass by, you have a good chance of intercepting them.

To further maximize your opportunities, land your catch as soon as possible and drop your presentation back to the same depth. You may still be in the thick of the action, not to mention that you may have created some level of competition between nearby attackers who will, in turn, want their piece of the pie.

When fishing with small jigs like Tungsten Toads, Ice Nymphs or even small soft jigs, it can sometimes be difficult to hook the targeted specimens.

Using a pair of pliers, simply open the hook outward at a 10-15 degree angle. Your success rate may then improve immediately.

It is possible to enhance the appeal of the metal spoon set and some hybrids by adding a led head on the tripod where permitted.

For long-lasting presentation, remove the hook, thread the head of the small fish with the mouth facing upwards and reposition everything. Jig the offering and gently vibrate it.

Reflections and vibrations have always captivated and interested predators. The new VMC Bladed Hybrid Short tripods are equipped with a small fine spoon which will not fail to increase the magnetism of certain lures such as Heddon Sonar, Jigging Rap, Puppet Minnow, etc. Just replace the belly tripod with the latter.

It is equally important to use light gauge wire and invisible wire to thwart the fish. A thick rope will limit the swimming of your presentation and will be more easily visible to the eyes of potential battlers. Also remember that fluorocarbon naturally sinks, which helps tiny lures sink even more deeply.