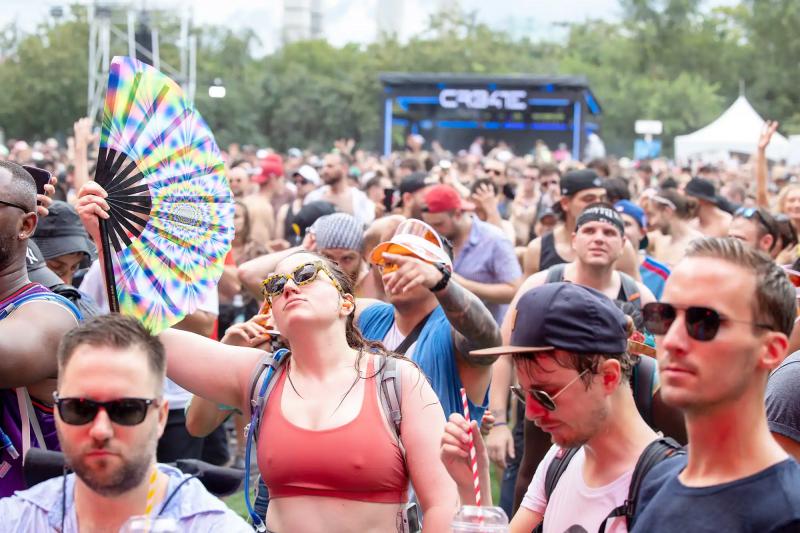 After a two-year hiatus, this weekend marked the return of ÎleSoniq to the delight of fans of electronic music, house and hip-hop. Presented under the sign of warmth, the event brought together some 85,000 festival-goers who were eager to party.

Fans of electronic music at Parc Jean Drapeau were treated to three full days of festivities, rather than two as in previous editions.

“It had been a goal for a few years, but we had to find the ideal programming to do it. It gave us nothing to expand the weekend, if this programming was not there. When we saw that the dates of Sweedish House Mafia matched since they were in New York and Toronto last Thursday and Friday, the stars kind of aligned”, explains, very happy, Evelyne Côté, director of programming of ÎleSoniq.

“It's incredible, I've wanted to have these headliners for six years,” she explains. First, Eric Prydz, who represents the underground a bit more, Illenium and Excision, who play together once a year somewhere in the world, and this is where it happened, and Swedish House Mafia , known worldwide for its house music”, she continues.

These headliners partly explain the success of the event this year with 85,000 festival-goers, a number that equals the 2019 record.

“Swedish House Mafia don't play festivals anywhere in the world except Coachella. People from Detroit and Brazil came to see them in this context, outside and not in the arena. The same goes for Illenium b2b Excision, a planetary happening for grassroots fans,” she adds. international on ÎleSoniq, unlike Osheaga where the opposite happened last week and where Quebecers compensated in terms of admissions.

In order to increase its presence on the international scene, the festival has set up a monumental stage. With a space 2.5 times larger than in the previous edition, ÎleSoniq is positioned as having one of the largest mobile stages in North America.

The stage left no one indifferent . “She is amazing, testifies Andréanne in the company of her friends in front of the Neon stage. And the sound is really good.”

Except for the rain on Sunday evening, the festival took place in glorious weather.

Sunscreen and a hat or cap were in order, especially on Saturday, on the festival site which is highly exposed to the sun and where there are very few shaded areas. The festival-goers were flapping their fans and, clearly, we had to hydrate!

“We water festival-goers frequently, there are signs on the big screens to remind them to hydrate and the presence of several water points,” recalls Evelyne Côté, who maintains that logistics are also important so that people don't Don't wait too long at water stations and change your mind to catch a show. A reminder to hydrate is also sent to the Festival's cellular application. A few cases of heat stroke were reported, but these were well managed with the presence of paramedics on site. But, overall, people think about hydrating and know how to take responsibility, ”says the director.

In fact, several festival-goers had equipped themselves with a backpack and an integrated hydration bag with which they could quench their thirst using a tube kept within reach of the mouth. Like Samuel, who had come with Élise for the three days, but particularly for Wooli, or even Mathieu, Olivier and Emmanuel. Simon and Oliver, who found the facilities well ventilated and the new stage incredible, also ensured that we could easily drink 7 to 8 bottles of water.

Shortly before 5 p.m., a horde of festival-goers headed for the Neon stage. The floor was overflowing for veteran Markus Schulz. Accustomed to performing at sunset, the veteran delivered his set a little before the end of the day when the sky was veiled in clouds.

Clearly, the German DJ was more than happy, constantly smiling, raising one or both arms like the crowd, which he showed himself to be very skilful in raising more often than not. 'in turn. The moving head lights let themselves go while the spectators danced on trance remixes of Sweet Dreams by Eurythmics or Cola by Camelphat & Elderbrook, broadcast quadraphonically.

Rising star on the progressive house scene, Simon Doty came to offer a dive into his soundscapes. Dressed in a casual white and black shirt, the Albertan made dance to his distinctive universe where a variety of musical genres rub shoulders, from house yes, to melodic, groovy, melodic and techno, in particular.

Dressed in a neon green cropped sweater, the leading artist of the Montreal scene performed in the middle of the afternoon on the Neon stage.

With his new project, TDJ , Geneviève Ryan Martel wanted to explore and have fun, TDJ being the acronym for Terrain de Jeux. Obviously, with a smile on her face, the producer, singer and DJ renowned for bringing eurodance up to date, was having fun.

Her performance ended in a short refreshing rain just before the return burning sun.