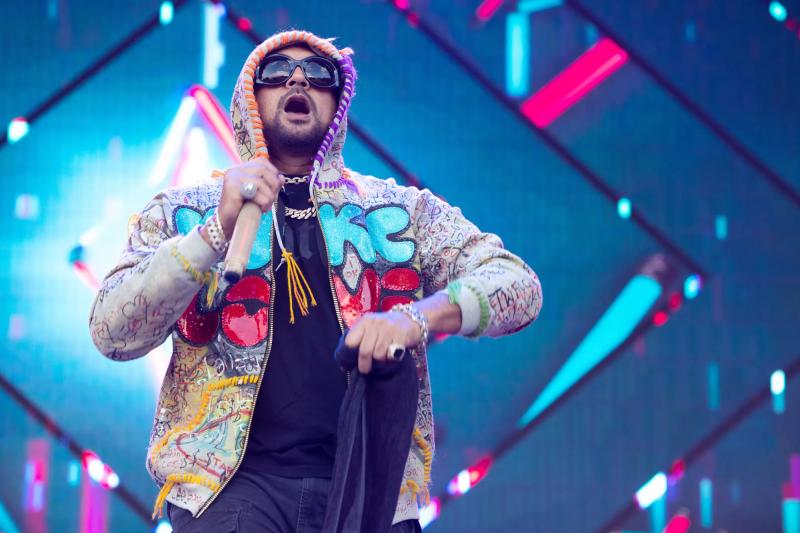 Under a blazing sun and a scorching day, techno, house and hip hop fans were able to have a blast at Parc Jean Drapeau on Saturday. On the Mirage stage, the king of dancehall and reggaeton, Sean Paul, thrilled the nostalgic as much as he introduced his new releases.

Festival-goers jump to their heart's content during the evening.

The crushing heat was not going to prevent festival-goers from being there on Saturday to party at ÎleSoniq. The “Ahoy, ahoy, ahoy, ahoy” were already being heard in the afternoon when exiting the metro, the desire to celebrate being more than palpable.

We saw plenty of flowery shirts, tank tops and colorful crop tops, outrageous hairstyles and clothes of all kinds, but several outfitshad certainly been swapped for bikini tops and swimsuit bottoms with or without fishnet stockings.

While the Canadian duo of the Van den Hoef brothers, Dvbbs, finished setting fire to an excited crowd in front of the Oasis stage, a crowd headed to the other end of the site to settle in the stands or else gather in front of the Mirage scene.

Sean Paul appeared wearing a hooded jacket with the words “  Make Love ”. To the delight of spectators, he began his show accompanied by his musicians with No Lie, popularized in 2017 with Dua Lipa.

The singer continued with Shake that thing and Got 2 luv you, supported on screen by the official video with Alexis Jordan and by Mad Love, recorded in 2018 with David Guetta.

Great happiness for the abundant crowd who were enthusiastic about Cheap Thrillsand Bailando, successes popularized with Sia and Enrique Iglesias.

On several occasions, the singer addressed the crowd, recalling that it had been four years since he had set foot in Montreal, thus inviting him to make more noise. However, people were dancing and seemed to greatly appreciate the performance, but obviously, it would have taken more.

“All the ingredients are there to make the party. The most beautiful women in the world are before me,” he added.

One would have expected Shenseea, who had performed earlier, to join him on stage, especially after the latter released the video for Light my fire three weeks ago where Gwen Stefani and the Jamaican singer is sharing the limelight.

< p>As the sun went down, nostalgics danced to Like Glue, the newest Rockabyeand the brand new Dynamite, performances punctuated here and there by “Make some noise ! “.

A real phenomenon of the 2000s, Sean Paul showed that was still relevant. The show ended with its great success of 2006, and quite indicated, Temperature, under the jets of water.

♦ At the time of publishing this text, festival-goers had just had to make a choice between the American hip-hop group of brothers Swae Lee and Mince Jxmmi, Rae Sremmurd, and headliners Illenium B2B Excision.

Dressed in a sequined singlet, sleeves and tall fuchsia tight-heeled boots, Shenseea introduced herself then that the Jamaican flag was displayed on the Mirage stage.

The one who has collaborated with Christina Aguilera and Kanye West, in particular, asked the crowd what the name of her latest album was, Alpha, before performing his songs that mix his Caribbean roots with hip-hop, afrobeat, reggae and R&B. The fiery singer performed her latest hit Lick, emphasizing the explicit lyrics, “Me want mi pum pum, suck, suck, suck”, with sexy and suggestive movements and addressing to the men of the crowd.

The 20 minute wait, where the American-American rapper's DJ was striving to keep the crowd waiting, was quickly forgotten with the arrival of French Montana. Highly enthusiastic, the crowd began chanting his greatest hits with the rapper.

This major artist on the African scene launched a clip last week entitled Keep it Real >, a song where he sings a duet with American rapper Est Gee. The song is taken from the brand new album Montega, where he collaborates with American record producer Harry Fraud.

Starting at 5 p.m., Sidepiece offered a strong performance on the spectacular Oasis stage, whose double-raised floor made it possible to see DJs everywhere struggling at the turntables.

Despite the clarity, many lighting effects had been put forward, huge screens regularly let the name of the duo from Los Angeles scroll by and jets of flame sometimes appeared to the great joy of festival-goers.

< p>The festive mixes had the crowd dancing with their arms in the air, with some highlights, especially during a mix where we could hear Alors on danse by Stromae and World Hold On by Bob Sinclair.