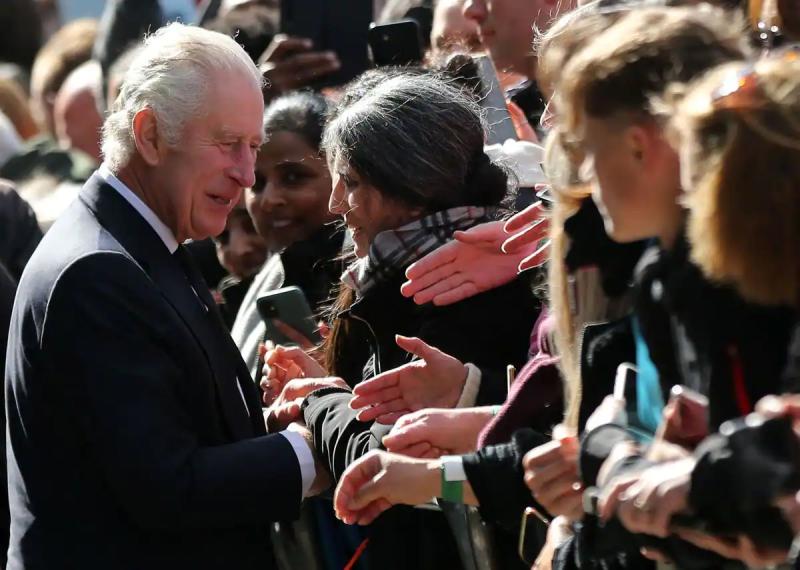 LONDON | King Charles III and his heir Prince William enjoyed a surprise walkabout on Saturday as Britons faced miles of queuing to bow before the coffin of Elizabeth II ahead of her funeral on Monday.

The hours are now counted to meditate before the remains – in her closed coffin surmounted by the sumptuous imperial crown – of the sovereign, very popular until her death, at the age of 96 and after more than 70 years of reign.

With two days to go before the 'funeral of the century', for which foreign dignitaries have started to flock, the waiting time in line along the Thames to Westminster Hall in London, before viewing the coffin, was estimated around 2 p.m. Saturday at midday.

Accompanied by Prince William, the new sovereign came for about twenty minutes to meet the crowd which marched without discontinue since Wednesday evening. He exchanged a few words and shook hands, as he did several times during the tour that took him all week through the four constituent nations of the United Kingdom, from Belfast to Cardiff.

Staying longer, the very popular heir to the throne thanked the public, worrying about the state of their feet, under the cries of “I love you William!”.

Vigil of the grandchildren

The one who now bears the title of Prince of Wales will join the Queen's seven other grandchildren on Saturday evening – including her brother Harry, with whom relations are notoriously difficult – for a wake for the coffin of the late queen.

“The vigil of the princes” Friday by the four children of Elizabeth II – Charles, Anne, Andrew and Edward – in uniform with their backs to the coffin moved the country and made the front page of many newspapers on Saturday. For the occasion, Andrew, deprived of most of his titles following accusations of sexual assault, had been authorized to wear the uniform.

London is feverishly prepares for his first state funeral since that of Winston Churchill in 1965.

They are the biggest event ever framed by the London police, she said. Even more imposing than the Olympic Games which took place in London in 2012.

Rare incident in the continuous tributes: a man was arrested on Friday evening after leaving the queue and approaching the coffin, authorities reported.

The public has until Monday morning at 6:30 a.m. to pay their last respects to the Sovereign, final farewells in meditation, sometimes tears, for a Sovereign who has become a symbol of unity and stability during her reign. an unprecedented length in the history of the United Kingdom.

A procession will then accompany the coffin to Westminster Abbey where the funeral will be held at 10 a.m.

Some 2,000 guests, including several hundred world leaders, crowned heads, but also anonymous individuals decorated for their community involvement, will attend the ceremony.

After a final procession, Elizabeth II will be buried privately on Monday in St George's Chapel at Windsor Castle, west London, next to her father King George VI and her husband Prince Philip.

Before the grandiose funeral at Westminster Abbey, Charles III begins an intense diplomatic sequence on Saturday at Buckingham Palace.

The monarch will notably welcome the prime ministers of the 14 Commonwealth kingdoms in the afternoon. , including Justin Trudeau, Jacinda Ardern and Anthony Albanese.

The leaders of the organization, to which Elizabeth II was very attached, but which is shaken by the Republican temptations of certain members, in the Caribbean in particular, should have the opportunity to go and pay their respects in front of the coffin of Elizabeth II, draped with the royal standard and adorned with the imperial crown. Ms Ardern has already been there on Friday.

On Sunday afternoon, Charles III, who became king at 73, will host heads of state for a reception.