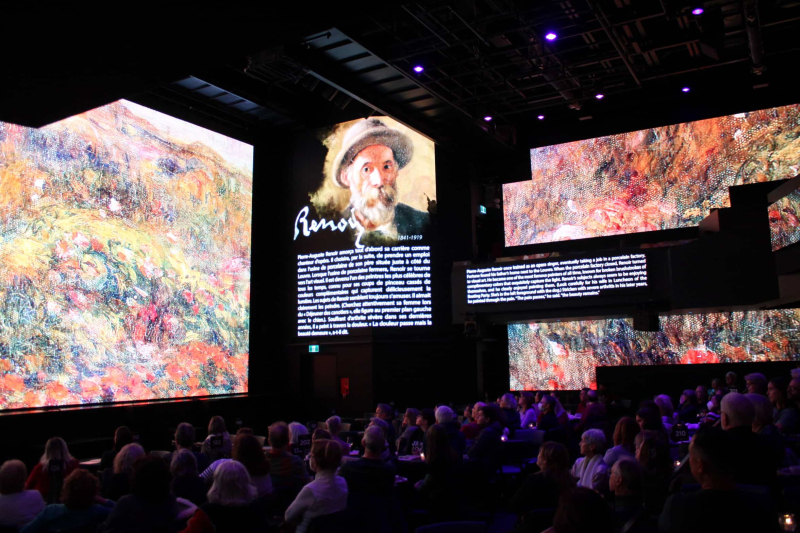 Want to take a trip to Paris without having to break the bank? The 3D immersive experience The Magic of the Impressionists will transport you to the mythical Paris of the 19e century! Until March 12, 2023, the Espace St-Denis Studio-Cabaret is transformed into a Parisian refreshment bar where the music is in perfect harmony with the – now moving – images of the great Impressionist painters.

< p>Sitting at a table in a room with a cozy atmosphere, a small glass in hand if you wish, you will gently dive into an immersive experience of just over an hour designed in two stages, proposed by the producers. behind the Imagine Van Gogh, Picassoand Monet events in North America.

Ride with the greats

The first part will make you (re)discover the works of the most gifted impressionist artists of their respective generation; while large video projections are placed here and there on the various panels surrounding the room. The second will have you put on 3D glasses so that the most beautiful works of these artists fascinated by color changes come to life before your eyes.

The Montreal cabaret becomes Parisian from the first notes of the pieces. 'Édith Piaf and Charles Aznavour, and as soon as the excerpts of black and white archive films are revealed, presenting moments spent by artists, inhabitants and personalities of yesteryear in the City of Light.

There are also large video projections of works by Seurat (pointillism), Degas (nicknamed the painter of dancing girls), Paul Cézanne (the father of modern art and one of the greatest impressionist painters), Claude Monet (qualified as the father of Impressionism) and his famous water lilies, Éva Gonzalès, Berthe Morisot, Marie Bracquemond, Camille Pissarro (who painted with Seurat), Talbot, Sisley, Paul Gauguin and Édouard Manet.

Be part of the picture

Enter Vincent Van Gogh and Auguste Renoir, two great artists whose paintings and characters parading around us can only move us again, in a whole new way.

You might think that new technologies would have eclipsed that of 3D glasses, however, this is not the case. On the contrary, the glasses used when watching 3D films in the cinema give life, in a simple and effective way, to the characters suddenly detaching themselves from the greatest paintings of the Impressionists.

Here, the flying dresses of Seurat's ballerinas dancing towards us, there, Monet's water lilies that we believe we can catch as we pass, the landscapes that come to life with their leaves dancing through the cabaret, the falling snow, the fields that move and the water on which we seem to glide while we are part of all these stories told with a brush.

These are enveloping contemplative moments that you will experience at the new Studio-Cabaret of the Espace St-Denis. A well-deserved beauty break reaching its peak when you walk through the fields of sunflowers, you can count the wrinkles on your face and you fly away in the starry sky of Van Gogh as the magnificent piece resounds >Starry Night (Vincent) by Don McLean, delivered by Adam Fisher.

The magic of the Impressionists at Cabaret-Studio of Espace St-Denis. Times and tickets: espacestdenis.com/evenement/magiedesimpressionnistes