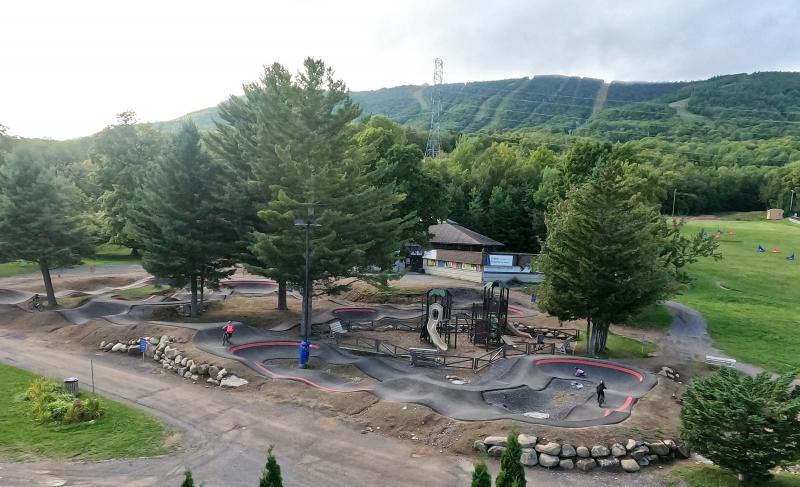 Whether it is called roller track, wave track, pump track or more commonly pumptrack, This course, intended for lovers of sports on wheels or casters, is a destination of choice for developing your skills or warming up before tackling the mountain on a bike.

This undulating track is a closed-loop course made up of turns and bumps that BMX and mountain bikers cross, but also skateboarders, scooters, inline skates or other non-motorized rolling machines. .

The objective is to succeed in crossing the course without using the pedals, but rather by performing movements of flexion and extension with the arms and legs (therefore by pumping), then by shifting its center of gravity to generate force. speed. When the challenge is successful, the cyclist tries to go faster, higher and maybe make jumps.

“We don't want any dead spots on a track, so that, regardless of your level, you can always propel your bike and develop your psychomotor skills,” says Frédérick Langlois, project director at Vélosolutions, a company that develops pump tracks all over the world. He specifies that setting off on such a course is a demanding activity on the muscular and cardiovascular levels.

Some courses offer a dirt surface, others in asphalt and in the case of the modular tracks offered by Atmosphäre, the structure is made of steel and reinforced polymer. These models have the advantage of reducing infrastructure costs because they can be installed directly on any level and drained surface, whether indoors or outdoors.

This adept sets off on a modular track signed Atmosphäre

Mountain bike enthusiasts will see several advantages in training on a roller track. “We learn to use the terrain to our advantage. We will use each of the small drops to create speed and save energy,” says Mr. Langlois.

Furthermore, when the mountain rises far from his home, the cyclist can stay active close to home, in town, by continuing to develop their skills on a pumptrack.

And if the course unfolds at the foot of the mountain, a warm-up on it before going on the trails allows you to awaken your muscles and your nervous system, to alert your senses, to stimulate your cardiovascular system and to test some technical skills.

Mont-Sainte-Anne recently inaugurated its bike park, consisting in particular of two pumptracksasphalted. According to Maxime Cretin, Vice-President and General Manager, Eastern Region, this marks “one more step in the democratization of sport and accessibility for all”.

For long-time enthusiasts, it represents an addition to the diverse network of Mont-Sainte-Anne, while new initiates and families will find it the perfect terrain to practice and develop their cycling skills.

A wave track is a gathering place in cities and in the mountains where people of all ages and all levels who like to ride come together. Such a site animates a community and keeps it active. And why not move from one track to another to live different experiences?

“We develop a unique concept in each place and that is what makes the DNA of the pumptrack . It brings an attraction to tour the slopes and feel the feeling specific to each one,” explains Mr. Langlois.