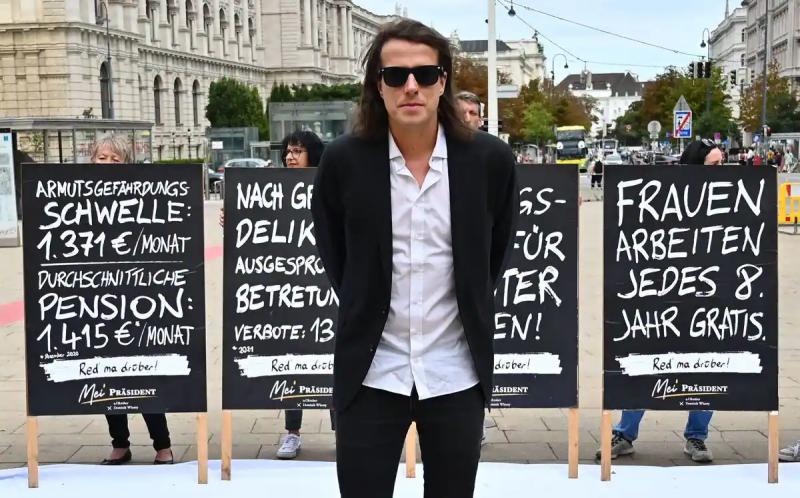 Piercings, tattoos and ripped jeans: by presenting himself as the “beer candidate” for the next presidential election, punk singer Dominik Wlazny hopes to attract Austrian voters tired of the traditional political offer.

Aged 35, this newcomer, recognizable by his dark glasses, stands out in the landscape of the rich Alpine country, about to offer a second mandate on October 9 to the head of the Green State Alexander Van der Bellen, 78.

The result should come as no surprise, far from the tumult of the last election which in 2016 saw the far right rise to the gates of power.< /p>

“It's David against Goliath”, admits to AFP the youngest candidate for the supreme office, which revolves in the polls around 5% of voting intentions – against 60% for the favorite – but whose candidacy “satirical,” he swears, makes sense.

Doing politics differently: this is the goal of this artist known by his stage name, Marco Pogo, who has been promoting his “Bierpartei” since 2015 in various elections and has managed to snatch 11 district council seats in Vienna in 2020 .

Install a “beer fountain” to attract tourists and “improve the quality of life of the inhabitants”, animal welfare or still promoting gender equality… its objectives are as surprising as they are consensual.

And you don't need to have a big descent to reach its few thousand inserts: red wine lovers or flat water are also welcome, laughs Dominik Wlazny, “not sectarian”.

Germanic culture obliges, beer is above all a means for him to attract attention, the candidate wishing to revive the public debate around a good pint, in moderation of course.

If humor is his driving force, he defends the seriousness of his approach, which he did not decide “out of bed”, he assures .

Faced with the gathering clouds, Dominik Wlazny sees himself as a box of ideas to “help people” confused by inflation, the return of war in Europe and the Covid-19 pandemic.

While he recognizes the mainly ceremonial role of the President of the Republic in this country of 9 million inhabitants, he assures that it would be possible for him to “do things differently”.

“ I sometimes have the feeling that it is more difficult to get an apprenticeship contract than a ministerial folding seat, ”he says, for example, targeting the political class.

If he is elected, he promises to scrutinize the CVs of the candidates to eliminate the incompetent.

Wanting to be a “figure away from partisan interests”, he also imagines “a ministry of the future” which would look into the impact of decisions that are too often short-termist, particularly regarding the environment.

“Why do we have 1,245 ski lifts” in the mountainous region of Tyrol “but no wind turbines?” “, he asks on one of his campaign posters, as if written in chalk on a large blackboard.

“ He has good values,” reacts Brigitta Koppelhuber, a 78-year-old Viennese retiree. “He's young, he's of his time,” she says, scrutinizing her slogans.

To capture the protest vote against his six competitors – all men – Dominik Wlazny has several strings to his bow: experience as a doctor, his notoriety as a singer in a group called… Turbobier and of course the famous beverage.

He makes his own beer, which we can find in supermarkets in Vienna.

Meanwhile, the road is long. Without the support of a large party, his campaign is mainly done on the internet, where the 30-year-old posts little schoolboy videos.

But in the streets, he is almost non-existent: the candidate has installed less than ten posters in the country.

Several were stolen. “Normal, they are stylish,” he smiles.