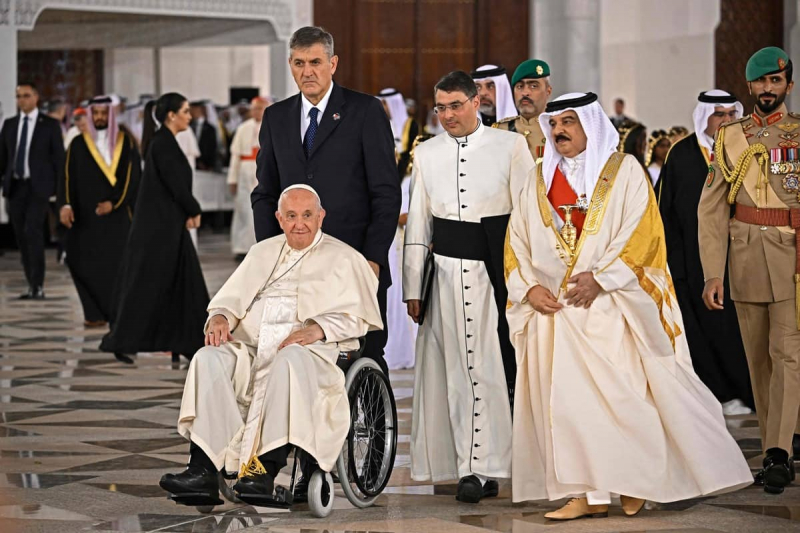 AWALI | Pope Francis called on Thursday, on the first day of his visit to Bahrain, for “that fundamental human rights not be violated, but promoted”, amid NGO criticism of political repression and discrimination against Shiites .

This four-day visit, started in Awali (center), is the first of a sovereign pontiff in the small Muslim kingdom of the Gulf and will be devoted to interreligious dialogue within the framework of a forum dedicated to this subject.

Upon his arrival, the Pope was greeted by a troupe of dancers dressed in the traditional long white robes of the Gulf.

Respect, tolerance and religious freedom, “recognized by the Constitution” of Bahrain, must be “constantly put into practice so that there is no discrimination and that fundamental human rights are not violated, but promoted said Pope Francis during a speech to authorities, civil society and the diplomatic corps at Al-Sakhir Palace.

Since the 2011 uprising, in the wake of the Arab Spring , Bahrain is regularly accused by NGOs and international institutions of carrying out fierce repression against political dissidents, particularly those from the Shiite community, in a country ruled by a Sunni dynasty.

On Tuesday, nine NGOs called on the pope to “publicly demand that Bahrain end all executions, abolish the death penalty and seriously investigate allegations of torture and violations of the right to a fair trial”.

< p>For its part, Bahrain intends to play the tolerance card to soften its international image, assuring that the country “does not tolerate discrimination”.

At the end of his speech, Pope Francis walked through the palace courtyard with flower petals thrown his way.

An island state of 1.4 million inhabitants, Bahrain formalized its diplomatic relations with the Holy See in 2000 and has some 80,000 Catholics according to the Vatican, mainly foreigners who come mainly from Asia.

This visit, the 39th abroad for Francis and the second to the Arabian Peninsula since his historic trip to the United Arab Emirates in 2019, should above all give pride of place to interreligious dialogue, of which he is a fervent defender.

The Pope will speak before the “Council of Muslim Elders” at the Royal Palace Mosque on Friday and will meet the Grand Imam of Al-Azhar, an important institution of Sunni Islam, with which he had signed in Abu Dhabi a founding document on human brotherhood.

“The meeting of these two Muslim and Christian figures is an honor for Bahrain,” Sheikh Dr. Abdul Latif Al-Mahmoud, a member of the country's Supreme Council for Islamic Affairs, told AFP.

Three weeks of the opening of the Football World Cup in neighboring Qatar, singled out in particular for the fate of its foreign workers, the pope called for “guarantees everywhere of safe and humane working conditions”, denouncing “dehumanizing work”.

A few days before the opening of COP27 in Egypt, Jorge Bergoglio also spoke of the “dramatic urgency” of global warming, calling for “concrete and far-sighted choices made with the younger generations in mind”.

For the first time since his election in 2013, the 85-year-old pontiff, who remained seated, did not do his traditional turn among the journalists accompanying him on the plane, because of his knee pain.

“I would like to greet you one by one but the problem is that today I am in great pain,” he told journalists, who came to greet him themselves.

The pope, who had to use a platform lift to board his plane, now uses a wheelchair. He had confided in September that his knee pain was “not yet cured”. Lady of Arabia, the largest Catholic church on the peninsula, inaugurated at the end of 2021.

“After the Covid, it is a joy that this family (Catholic community of Bahrain) returns” to the church , welcomes Father Xavier Marian D'Souza, parish priest of the Church of the Sacred Heart where the Pope will go on Sunday.

Saturday, the Pope will celebrate in a stadium a mass at which some 28,000 Christians are expected.

Since his election in 2013, the leader of the 1.3 billion Catholics has visited a dozen Muslim-majority countries, including Jordan, Turkey, Bosnia and Herzegovina, in Egypt, Bangladesh, Morocco and Iraq.