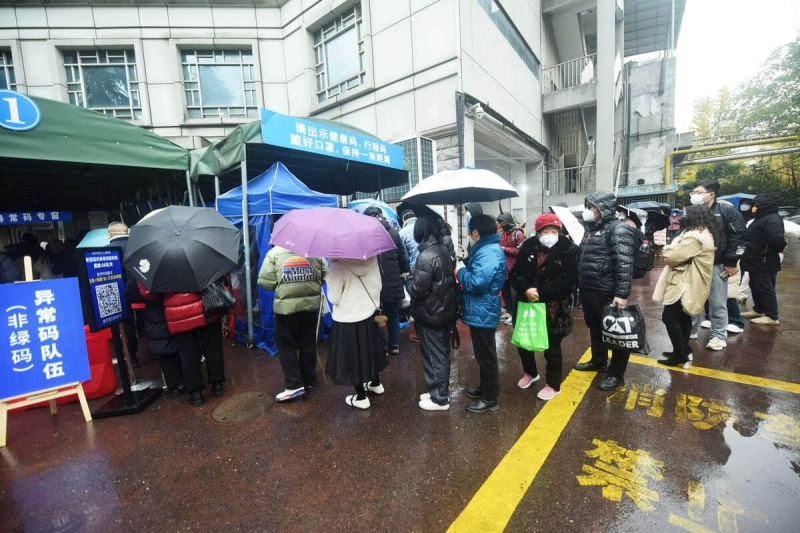 Crematorium workers in Beijing said Friday that their establishments are overwhelmed by the unprecedented wave of COVID cases in China, which authorities say are expected to affect rural areas soon.

The outbreak is spreading rapidly across China, a week after the majority of health restrictions in place for nearly three years were lifted. Authorities have admitted that it is now “impossible” for them to tally the number of cases.

“We are cremating twenty bodies a day, mostly elderly people. Many people have fallen ill recently,” an employee of a crematorium told AFP.

The virus does not spare the staff: “We are made to work a lot! Out of 60 employees, more than 10 are positive (for COVID), but we have no choice, there is so much work lately,” he added.

Another crematorium said it now has a one-week waiting list.

Yet official figures show no COVID-related deaths since December 4.

The body in charge of the fight against COVID on Friday called on local governments to increase their surveillance and medical attention for people returning to their families in rural areas in the run-up to the Chinese New Year in January.

The event causes the largest population migration in the world every year. Demand is expected to explode this year, after inter-provincial travel restrictions are lifted.

But the country has millions of vulnerable elderly people who have not been vaccinated, while antigen tests and fever medications have become unavailable in many pharmacies.

A recent study by researchers at the University of Hong Kong predicted that COVID could kill one million people in China this winter, absent a fourth dose of the vaccine or new restrictions.

Officially, only nine deaths have been attributed to the epidemic since mid-November. The country has recorded more than 10,000 daily cases since.

Previously, no virus-related deaths were reported between May 28 and November 19.

When the first cases were detected in December 2019 in Wuhan (center), many deaths of COVID-positive patients were not listed, due to strict national rules to attribute a death to the virus, according to the explanation given to Chinese media at the time.

This week, the directors of five retirement homes told the local press that they could no longer obtain antigen tests or in drugs due to shortages. They said they have no contingency plan in case cases explode.

Employees of many retirement homes in Beijing, contacted by AFP on Friday, refused to discuss the situation in their establishments.

At the national level, many retirement homes continue to operate “in circuit closed” – a containment measure where staff must sleep on site – according to notices published online in recent days.

But the absence in China of doctors' offices means that the population tends to go to hospital for even a minor problem, which easily causes congestion.

AFP was able to geolocate one of these videos, shot in front of a hospital in the city of Hanchuan, in the province of Hubei (center), an employee from the hospital confirming that it is from Tuesday.

“The patients in this video were flight Ontario to sit outside in the sun, because there were too many people inside,” he told AFP.