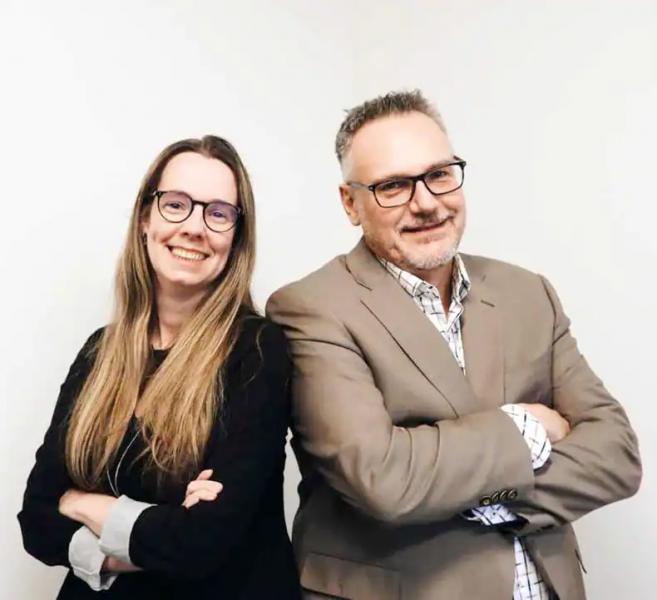 A Department of Health executive managed to co-found a company with a lobbyist who targeted his own department, while he was receiving his full public service salary.

Our Bureau of Investigation discovered that on January 19, Stéphane Brossard, director of information technology at the ministry, became president and shareholder of Plakett digital health.

He only officially left the ministry until February 11.

In his new professional adventure, the former senior civil servant is associated with Isabelle Girard, president of Plakett Clinical Services.

Little known to the general public, this company specializes in consulting services for medical clinics and primary care. em>see below). Ms. Girard is a lobbyist and has obtained two contracts by mutual agreement.

In addition to Stéphane Brossard, the company has hired the Minister's former senior political adviser and has given consulting mandates to a former Associate Deputy Minister.

The Ministry of Health maintains that Stéphane Brossard advised it on January 16 that he intended to leave his post to go into business.

However, he indicates that he was not informed at this moment of the creation of Plakett digital health and the role of Isabelle Girard in this company.

“At this time, the MSSS [ministry of Health and Social Services] asked Mr. Brossard that he does not start his business activities before leaving the MSSS,” said a ministry spokesperson, Marjorie Larouche.

The regulations do not prevent a former manager from going into business, but he must respect the applicable ethics and post-employment rules.

“We have no information that allow us to believe that Mr. Brossard did not respect these rules”, specifies the ministry.

When contacted by telephone by our Investigation Office, Stéphane Brossard refused to answer our questions and promised to call us back. Rather, it was a public relations firm that provided explanations by e-mail.

“By the nature of our consulting mandates, the majority of Plakett's team members may have worked with, at different times, employees from several ministries, including the Ministry of Health, in particular Mr. Brossard,” indicated Maxime Couture of Catapulte communication.

For Professor Marie-Soleil Tremblay of the École nationale d administration (ENAP), the situation is questionable.

“We are in the gray, there is a reputational risk,” she said.

The public management specialist recommends a period of one year between the departure of a senior official from a ministry and hiring from a private supplier.

“There is a certain distance that must be kept between the public apparatus and the suppliers”, she says.

– With Pascal Dugas Bourdon and Nicolas Lachance, Bureau of Inquiry

The former deputy minister defends himself

Luc Bouchard left the department in May 2021. He was the one who signed the two contracts given without competition to Plakett in 2020.

Contacted for the first time by our Bureau of Investigation, he initially denied having worked for the company.

A few days later, he admitted to having represented Plakett at the outside Quebec.

Two mandates that did not exceed a few hours, assures the company.

In an interview, Mr. Bouchard acknowledges that as deputy -minister, he had contacts with Plakett and its president, Isabelle Girard.

“Plakett is the company that works the most with FMGs [family medicine groups] and medical clinics and others […] It is the authority in Quebec in that,” he says.

One of the contracts given without competition to Plakett was for the analysis of different technologies for making appointments with a doctor.

According to documents obtained under access to information, Isabelle Girard presented her analysis to the Deputy Minister in November 2019.

For this same contract, she also had the mandate to study the computerization needs of specialists in private practice.

Luc Bouchard now works at the Institute for the relevance of medical procedures (IPAM). He admits to continuing to meet with Plakett employees on occasion.

“We meet suppliers [in particular those referred by Plakett]. We listen to what they have to say, that’s it, that’s all. Afterwards, they are referred to the Ministry of Health or the FMSQ,” he says.

IPAM was created as part of the agreement between the Federation of Medical Specialists of Quebec and the Treasury Board, when Christian Dubé was in charge. The Institute aims to identify sources of annual savings in the remuneration of physicians.

< strong>Recruitment of the Dubé advisor

Last January, Plakett recruited Patrick-Emmanuel Parent, senior political adviser to Minister Christian Dubé, who had announced his departure from the cabinet a month earlier. He says he learned after joining Plakett that the company was playing a strategic advisory role with people involved in rolling out the physician appointment scheduling orchestrator. This orchestrator is essential to the patient access desk, one of the centerpieces of the plan to reorganize health care presented by Christian Dubé in March.

The Minister delivers a speech

Christian Dubé at a symposium organized by Plakett last May.

Minister Christian Dubédelivered the keynote speech at the last Frontline Health Symposium, organized by Plakett, on May 13. Isabelle Girard also maintains links with the Associate Minister of Health, Lionel Carmant. Last December, the two ministers were reunited during an activity of the UP Pediatric Center in Brossard in the company of the boss of Plakett.

Isabelle Girard has been lobbying the Ministry of Health since 2017. She has notably represented the UP Pediatric Emergency Center, the Radiologix group and the Carpe Diem Medical Clinic. His company also offered its lobbying support services. She is currently registered in the register of lobbyists on behalf of the computer firm Logibec.

Plakett has received two contracts from by mutual agreement from the Ministry of Health in 2020. A first contract was awarded to provide an analysis of the various technologies for making appointments with a doctor on the internet. The company also received a contract to deploy the “orchestrator” for making appointments in medical clinics. In both cases, the contract was issued with reservations from the Departmental Contract Management Branch. However, the comments related to these reservations were redacted in the response to an access to information request provided to our Investigation Office.