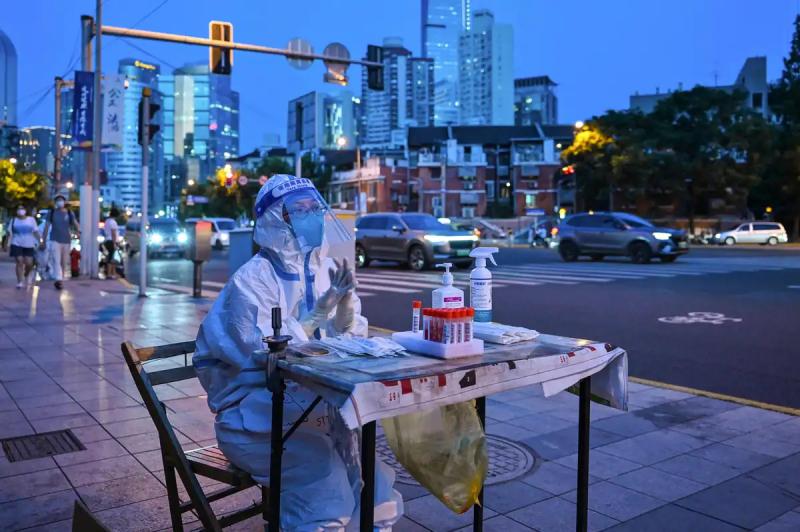 Several million people are confined on Wednesday in China, because of an epidemic rebound which raises fears of the return of restrictions, in particular in Shanghai, a month after the lifting of a long and grueling confinement.

China's largest city was locked down for two months in the spring to stem the country's worst outbreak of COVID-19 since the outbreak began .

The particularly strict confinement of the economic capital has been a test for its 25 million inhabitants, faced with problems of supply of fresh produce.

The draconian measures to fight the virus, including the systematic placement of positive cases in quarantine centers, had provoked the exasperation of the population.

Shanghai lifted most of the restrictions on June 1, but some neighborhoods have been temporarily confined after the detection of sporadic cases.

Since Sunday, a rebound has been observed and Shanghai reported 24 additional cases on Wednesday.

To identify contact cases, most of districts have launched screening tests.

“I really don't want to do it, it's useless,” said resident Alice Chan to AFP, who however resolved to do so for fear of seeing her health pass turn red.< /p>

“People are no longer afraid of Covid, they are afraid of being locked up at home,” says Yao, a Shanghainese who did not wish to give his last name.

Shanghai closed all its karaoke bars on Wednesday, in connection with some cases of COVID-19, according to the authorities.

Five weeks after the lifting of a difficult confinement, some residents fear a return to tougher restrictions.

Concern amplified by the receipt by some households of food rations, according to widely shared messages on social networks.

“The Putuo district (in the center of Shanghai, editor’s note) is sending vegetables again,” wrote a resident on WeChat messaging.

More than a thousand cases have been reported there since last week, with contaminations now reaching the neighboring province of Jiangsu (east), bordering Shanghai and an important manufacturing region.

China is one of the last countries to apply a so-called “zero Covid” strategy in the face of the epidemic. This health policy consists of massive screenings, mandatory quarantines in the event of a positive PCR test and targeted confinements.

Deemed necessary from a health point of view by the authorities, these measures penalize the activity with many companies closed or idling.

According to estimates by Nomura Bank, at least 114 million Chinese are subject to various travel restrictions, including confinements. They were 66 million a week ago.

The large city of Xi'an (north) is also reimposing “control measures”, after an outbreak of Omicron linked to the BA sub-line .5.2, according to local health authorities.

This strain is deemed to be more contagious but less virulent.

Restaurants, bars, places of worship and even karaoke are closed preventively for a week in the metropolis of 13 million people.

The BA.5.2 sub-variant was also detected in Beijing, where the authorities nevertheless deemed the epidemic “under control” on Wednesday.

The capital is nevertheless strengthening its health measures: from July 11, libraries, museums and cinemas will only be accessible to vaccinated people.