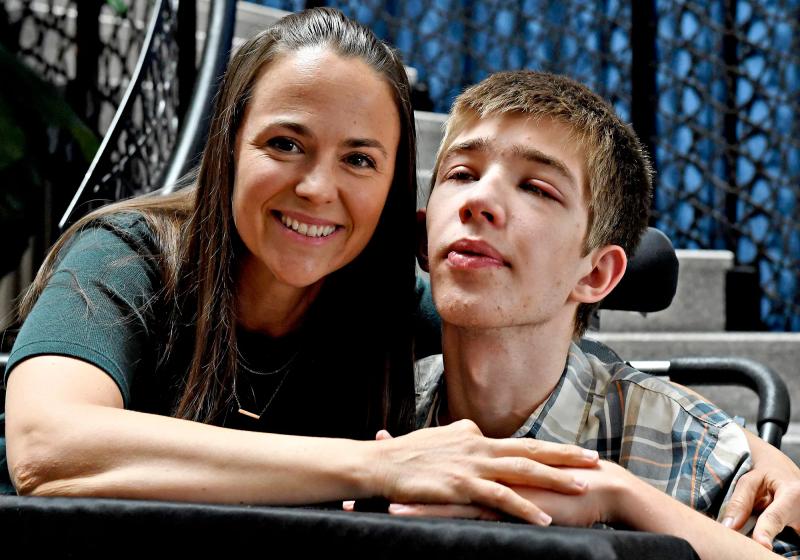 Rarely has a TV series had such an appropriate title as About Antoine, which is currently filming in Quebec.

Directed by Podz, this autofiction is inspired by the family life of Antoine Parent-Bédard, the polyhandicapped son of the founder of ComediHa!, Sylvain Parent-Bédard.

It was written by his wife, Cathleen Rouleau, who will also make her debut on the small screen by playing her own demanding role, which she has happily occupied for eight years in real life, that of Antoine's stepmother. .

“My life has changed with Antoine and I hope that the lives of all Quebecers will change in contact with this series because it is important. Society adapts well to people with disabilities, but not yet enough “, confided Cathleen Rouleau, during a meeting with the press, yesterday, in Quebec.

Antoine above all< /strong>

Already, for obvious reasons, it was a special project, “the most important” of ComediHa!, says an emotional Sylvain Parent-Bédard, who brought together a superb cast including Claude Legault, Fanny Mallette and Micheline Bernard.

It became even more special because it It was agreed from the start that Antoine, who suffers from autism, intellectual disability and epilepsy, would also star in the series.

As the title says, everything revolves around Antoine, both in the plot and on the set.

“On day 1 of filming, a neurologist came to meet with us because we had concerns and wanted to make sure that everything would really be about Antoine. Podz told us that if he's not well, we stop, if he needs a break, we take a break, if he's hungry, we eat. Everything is organized around him,” says Cathleen Rouleau.

“The main thing, adds Podz, is may Antoine be well. I wasn't sure how he was going to take it. I didn't want to be taken advantage of.

The fears, while legitimate, were unfounded. Not only does the shooting not affect Antoine, who can count on a double for the more difficult scenes to shoot, but it has a beneficial effect on him.

“Since we started, he has reduced his epileptic seizures by at least 50 to 60% because he is stimulated all the time. Everyone watches over his well-being and talks to him. He likes it “, notes Cathleen Rouleau.

The latter paid a touching tribute to Nathalie, the mother from Antoine to “the instinct of a warrior”.

“She is a power-mom. I admire him a lot in his relationship with Antoine and his brother. She listens and would move mountains. You're going to tell me that all moms do that, but Nathalie has a superior sensitivity, probably because of Antoine ,” says Cathleen Rouleau, happy to have obtained his approval to write her story.

The filming of 'About Antoine marks the return of Claude Legault to the sets after a break to treat exhaustion issues.

“ She got on board right away in the project, she is present on the set and often she texts me to tell me that she is happy with a scene that I have written. It saddens me a little that she is in the shadows because she is so important. »

About Antoine will be broadcast in 2023 on Club illico and TVA. The rights to the series have been sold in France and are about to be sold in the UK and Brazil. Negotiations are underway in other territories.