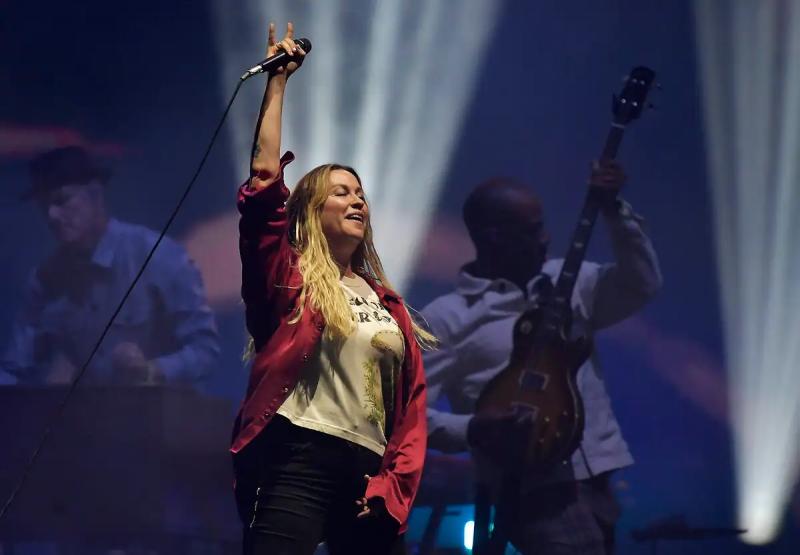 Long held by the male glories of the 60s and 70s, the torch of nostalgia on the Plains of Abraham was successfully taken up on Friday evening by the woman who redefined rock for women during the 1990s, Alanis Morissette.

On a beautiful summer evening, tens of thousands of festival-goers reconnected in sweet joy with the inspiring songs of his immense album Jagged Little Pill, released in 1995.

< p>Of course, the Ontario artist has never stopped creating music, but this reunion with the public of Quebec, 23 years after his last visit to the capital at the Coliseum, was first and foremost a celebration of this flagship album and, by extension, of his career.

A video montage presented before her arrival on stage testified to her past successes and her influence with a whole generation of musicians.

As for the songs from her other albums that were on the program, she only offered short excerpts for the most part.

Alanis Morissette did not keep the nostalgics waiting. A string of tracks from Jagged Litlle Pill kicked off their performance. After seeing her pacing the stage from edge to edge on All I Really Want, as she has been doing all night long, the crowd took out their cellphones and vocal cords to accompany her for Hand In My Pocket.

What was striking from the outset was the power of her voice, clearly unaffected by laryngitis which forced her to cancel two concerts last month. During her impressive interpretation of Mary Jane and several times during her 90 minutes on stage, Morissette reached heights inaccessible to ordinary mortals.

She often practiced social distancing with her microphone, lowering it to hip height without losing a single note, à la Ginette Reno, a flattering comparison if ever there was one.

< p>Although she was not very talkative, the 48-year-old artist delivered an almost flawless performance. Although the public was most fond of the anthems Ironic, complete with a tribute to his late late drummer, Taylor Hawkins, and You Oughta Know, it is when she used her formidable rock energy, on Wake Up and Uninvited, for example, that Alanis Morissette was at her best.

Even if, like Alanis, he will be associated for eternity with 1995, year of release of his eponymous album and refuge of all his great successes, the American group Garbage came to reaffirm that he has lost none of his relevance, in the first part.

Of course, the Vow, Stupid Girl, Queer, the latter preceded by a reaffirmation by singer Shirley Manson that we do not live in a friendly world for women and the LGBTQ+ community, and Only Happy When It Rains, this one presented in a clever version started in slow motion, in a keyboard-vocal formula, before melting into an irresistible crescendo, had their effect. when the quartet, which becomes a quintet on the boards, used songs from their 2021 album, No Gods No Masters.

Placed at the start of the run just after Vow, the title track, with its nervous rhythm, established that we were not just in a nostalgic affair. Ditto with Godhead, during which guitarist Duke Erikson and bassist Steve Marker erected a powerful wall of sound on the Plains.

A similar operation was repeated with the same exhilarating result on Push It, this one rescued from Version 2.0, released in 1998.

In addition, at 55, Shirley Manson has retained the rebellious energy of her youth and her voice still holds up. She insisted on speaking to us in French, even seeming annoyed when she couldn't find the words.

She didn't have to worry. The effort, especially in the context of a rock show of this quality, was appreciated.

< p>The singer in yellow, the two guitarists in green and blue, the drummer in red  supper time.

This group, which has been rolling since 2013, crowned revelation group of the Junos awards in 2018, was sponsored by Emily Haines and James Shaw, from Metric, producers of their album Late Show and you can hear it in the concern they seem to have that their punk rock melodies can also be danced to.

On stage, were we able to discover, they have contagious fun and a conquering attitude. As an appetizer, just before Garbage and Alanis Morissette, it was perfectly in tune.