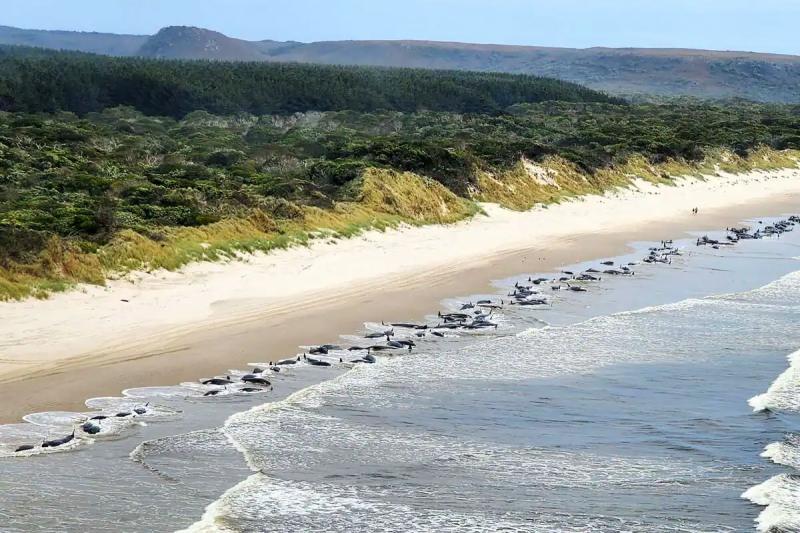 About 200 pilot dolphins or pilot whales have perished after washing up on an exposed, wave-swept beach on Tasmania's rugged west coast, Australian lifeguards said on Thursday.

Only 35 of the approximately 230 cetaceans discovered on the beach the day before were still alive, Brendon Clark, director of operations for the state wildlife department, told reporters at the scene.

Aerial footage showed dozens of shiny black mammals stranded on Ocean Beach, along a wide sandy beach in contact with the cold waters of the Southern Ocean.

“On the beach we still have about 35 animals still alive and this morning the main objective will be to rescue and free them,” said Mr. Clark who leads the operation.

“Unfortunately, the mortality rate for this stranding is high. It's mainly due to the conditions on Ocean Beach,” he pointed out.

“The environmental conditions, the undertow on the exposed west coast, Ocean Beach, certainly have an impact on the animals,” he added.

Residents had covered the cetaceans with blankets and sprinkled them with buckets of water to keep alive after their discovery on the beach.

The cetaceans were stranded near Macquarie Harbour, the scene almost two years ago to the day of another massive stranding, involving nearly 500 stranded pilot dolphins.

More than 300 of them were then dead, despite the efforts of dozens of volunteers who struggled for days in the freezing waters of Tasmania to free the animals.

Mr. Clark said conditions are tougher this year than two years ago, as the animals were in “much more sheltered waters”.

Rescuers have triaged the cetaceans to assess those with the best chance of survival, he said.

“Today the focus will be on rescue operations and their release” .

The reasons for these large strandings are not fully known.

Researchers have suggested that they may be caused by groups of cetaceans straying after feeding too close to shore.