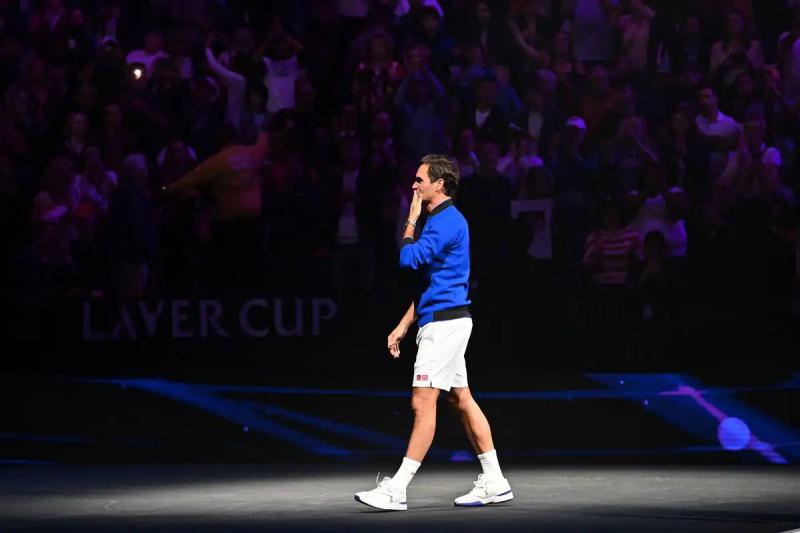 Adored by some, respected by all, Roger Federer put an end, on Friday, to 25 years of an exceptional career in tennis during a double accomplice with the one who was his greatest rival, Rafael Nadal, at the Laver Cup, in London.

With 103 titles on the ATP Tour, including 20 Grand Slams, 310 weeks at the top of the rankings, including 237 in a row in his longest reign, 'King' Federer's imprint on tennis is not about to fade.

An immense thrill ran through the O2 Arena and its some 17,000 spectators when he last entered the court as a professional tennis player, under the eyes of his family, inevitably moved, in the stands.

Roger Federer's tears (and Rafael Nadal's) are for me morally shoot down… 💔 #LaverCup pic.twitter.com/LILSaVAMSb

In trouble with his right knee for too long and faced with the lack of sufficient progress revealed by a scanner a few weeks ago, he ended up announcing his irrevocable departure eight days ago.

He had chosen the Laver Cup, a team match between Europe and the Rest of the World, which he had helped to create, in London, a city that had witnessed some of his greatest exploits at Wimbledon or the Masters, to draw his reverence.

After almost a year and a half without playing, a single would have been too demanding for his damaged physique, but a double, with his quality of service, his touch and his eye, remained completely within his limits.

It also allowed him to surround himself with a team, and what a team! He had by his side Nadal, his one-night partner, but also Novak Djokovic and Andy Murray, two players of his generation and whom he saw progressing until they challenged his superiority and even overtook him, as well as the next generation, embodied by Casper Ruud, Stefanos Tsitsipas and Matteo Berrettini, who will replace him for the rest of the Laver Cup.

The presence on the bench of Björn Borg, as captain, as well as those of John McEnroe on that of the Rest of the World and of Rod Laver, the first player to have twice won the four Grand Slams in a calendar year and to whom the competition pays homage, never mismatched in this tennis celebration.

The formula of the Laver Cup, which allows the whole team to approach the players during changes of side to provide advice or encouragement, gave a very friendly atmosphere at this moment between rivals and friends.

The match itself felt like an exhibition at times, but not playing hard and not playing your best tennis would almost have been a crime of lèse-majesté.

Jack Sock had warned before the match: “We will take advantage of the moment, but we will not hold back our blows, sorry Roger”.

At 7-7 in the super tie-break of the third set, Tafoe did not hesitate to “turn on” Roger Federer at the net and Nadal again at 9-9.

Before that, c t was on a winning forehand volley that he offered his team the first set ball, won on one of his passing shots that Sock was unable to return (6-4), to the delight of the public.

A few unusual failures nevertheless came to remind us that the master is no longer quite as efficient and the second set lost in the tie- break (7-2) made it possible to delay the deadline a little more.

The third set was an intense crossover, with Federer serving to win the match at 9-8, but in the end it was the Americans who spoiled the party a bit.

Tears quickly overwhelmed Federer who received a standing ovation from the entire audience.

In view of the incredible career and the importance he has had in the evolution of this sport in the 21st century, this defeat will be an adventure and he himself said he was ready for his new life which began in the London night.

“We always want to play forever . I love being on the court, I love playing against guys, I love traveling. I never found it difficult for me, whether I won or learned from my defeats, everything was perfect, I loved my career,” he assured.

But “everyone has to leave the competition one day. It's been a really, really great adventure. And for that, yes, I am extremely grateful,” he concluded.