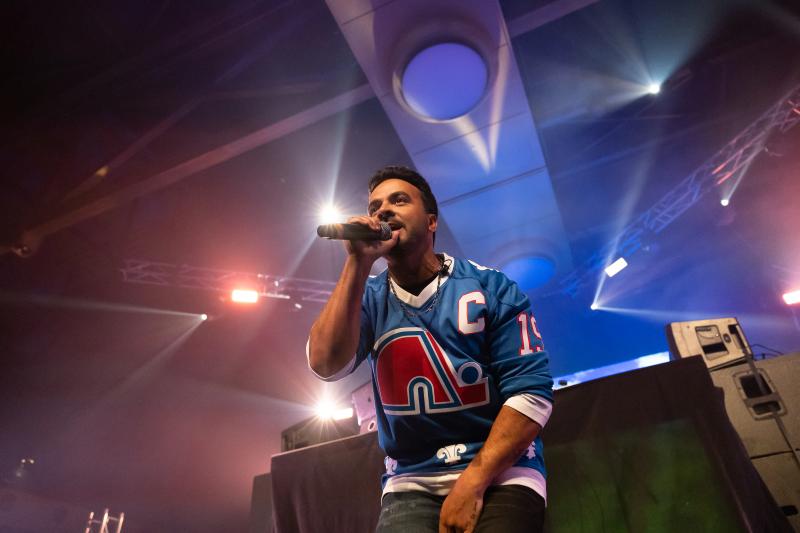 Despacito, that will be for another time. At least on the Plains of Abraham. After the cancellation of his concert due to a violent storm on Thursday evening, Luis Fonsi went to sing at the Armory, sheltered from the rain.

The Puerto Rican-born star briefly joined DJ Alex Sensation on stage, who was scheduled for the late night as part of FEQ Extras, much to the delight of the lucky 800 who had managed to sneak inside.&nbsp ;

“Technically, it's not possible to do a concert. He will do what he can in the circumstances”, had previously warned the director of programming for the Festival d’été, Louis Bellavance.

Luis Fonsi showed up around 11:30 p.m., about forty minutes into Alex Sensation's performance.

“Bonsoir Québec,” he exclaimed, a Joe Sakic Nordiques jersey on his back. “I wanted to see you anyway, I wanted to be near you”, he added before sowing the frenzy by singing Echame La Culpa and Despacito.

“I love you Quebec,” Fonsi then launched, before leaving, promising to return soon.

This hastily improvised performance partly saved the first Latin evening in the history of the FEQ, which had just fallen through due to a deluge that the weather forecasts had not seen coming.

Luis Fonsi was impatiently awaiting this first concert of his career. He had even prepared a lineup of songs specially designed for the Plains.

The rain started to fall at the end of singer Becky G's concert as opening act.

< p>The rains quickly intensified and after some lightning and thunder, the organization of the Festival d'été ordered the evacuation of the site, around 9:20 p.m..

The other outdoor stages of the FEQ, where Lil Tecca and Gros Mené were performing, were also evacuated.

Luis Fonsi therefore suffered the same fate as the Foo Fighters, in 2015, and Imagine Dragons, in 2019, except that he did not even have time to sing a single song on the Plains.

Will he be back for an upcoming FEQ? Louis Bellavance has not ruled out this possibility.

It's a shame because the evening was off to a good start. The young Califonian Becky G, star of Spanish pop and reggaeton with her songs having hundreds of millions of plays, offered a flamboyant opening act.

After letting her DJ heat up the crowd during ten minutes, the 25-year-old artist pulled out all the stops as soon as we saw her show up to the sound of Fulanito. A troupe of energetic dancers, jets of flame and smoke, bright red costumes, lively rhythms, the spectators knew immediately that they would have few opportunities to catch their breath.

The only time the singer slowed down, she went down to the floor to perform the ballad Dolores while shaking hands. Some fans could barely contain their emotions at seeing her so close. em>Mamii just before the flood.

Was this the first part by Luis Fonsi or an extension of the electro evening the day before? One thing is certain, the Colombian DJ Alex Sensation, who does not even have a Wikipedia page yet, led a hellish party at the start of the evening.

Alternating house, Latin and classic rock hits, ranging from LMFAO to Queen to Bad Bunny, he kept his world alert from start to finish by creating an all-inclusive vibe on the Plains. The festival-goers near the stage were dancing and singing at the top of their lungs.

As a warm-up session, you could hardly ask for more.