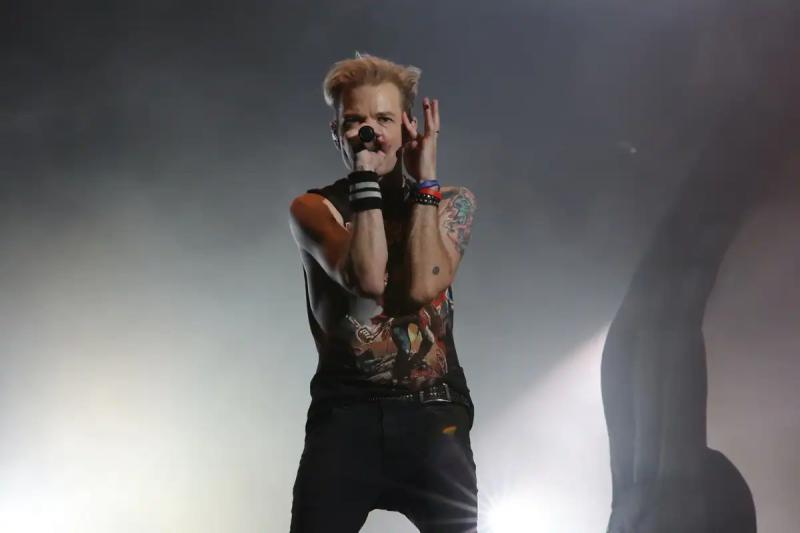 They flipped the “Pigeonnier” upside down in 2018. They did the same on Friday at a hugely popular and well-attended punk-metal night at Parc de la Francophonie.< /strong>

There were people, atmosphere, a “moshpit”, surfers and lots of action.

As expected, the site was closed early. We let people in, between performances, depending on how many people were leaving the place. At 5:30 p.m., on its social networks, the Summer Festival indicated that those who were in line, at that time, beyond the Tourny fountain, might not be able to enter.

FRANCOPHONIE PARK. Only those in line from the Tourny fountain should be able to access it. Further, you may not be able to enter. Note that the Sum 41 show will be broadcast at 9:15 p.m. on the screens instead of AssNat. Thanks! #FEQ pic.twitter.com/Yk1adPCwpD

Led by a Derick Whibley in great shape and voice, the formation of Ajax in Ontario took control of the place from the first notes of Motivation.

“I have a question. Where are the crazy motherfuckers? Raise your hand”, he launched, before starting The Hell Song, Over My Head (Better Off Dead) and We're All to Blame, with an audience singing and waving their arms in the air.

Whibley wore an Iron Maiden jersey and behind the stage was a huge skeleton that did a little good think of Eddie, the famous British training mascot.

“We don't have a new album. We just have old stuff, old stuff and really old stuff,” he said before Some Say from the album Chuck.

< p>After In Too Deep, Deryck Whibley couldn't believe it.

“It's hard to express what we're feeling right now hearing you all sing words. We love you. Thank you, thank you and thank you,” he said, calling the audience family.

The singer took out his black guitar to do a few bars of Smoke on The Water of Deep Purple and Seven Nation Armyby the White Stripes, followed by the opening chords of Goddamn I'm Dead Again.

Sum 41 then offered the fast version of We Will Rock You featured on Queen's Live Killers album. It was very cool to hear that, accompanied by puffs of smoke.

“You survived all that bullshitto be here.  The money it cost you, the traffic in town, the long lines to enter the site, the phones you lost in the moshpit. Thanks. This song is for you”, he specified before Fat Lip and Still Waiting, which put an end to this crazy evening.

On Monday, we gave the keys to the city to Three Days Grace. Now we'll have to take a double to the guys at Sum 41.

Around 8 p.m., a few seconds after landing on the boards, Fletcher Dragge, the giant format guitarist of Pennywise sent a message of hope to the people who were still in line.

“Security, open the fences. There is room for everyone”, he said, without his request materializing.

Jim Lindberg and his gang admitted to having had a little fun the day before.< /p>

“You're helping us get over our hangover,” the singer said, wearing his traditional cap and wearing a Cramps jersey, referring to the energy coming from the crowd.

After revisiting short segments, not always successful, of Guns N' Roses, Deftones, Sum 41, The Who, NOFX, Dead Kennedys, Bad Religion, AC/DC and the Beastie Boys with the famous Fight For your Right , Fletcher Dragge screwed up a lot of things. COVID, the government, the world and the U.S. Supreme Court.

“We are running this shit,” he said, before Fuck Authority, Stand By Meand the unmissable Bro Hymn, sung at the top of their lungs by the fans and with, on stage, the members Millencolin and NOBRO.

Speaking of Millencolin, the last visit by Swedes to the Old Capital dates back to 2016.

“It's been far too long,” admitted guitarist Erik Ohlsson.

< p>From the first seconds of the piece Kemp, the front of the floor immediately became an area devoted to the “moshpit” and surfers.

Singer-bassist Nikola Sarcevic had a slightly scratchy voice at the start of the performance. The Rays, Sense & Sensibility, Fox, No Cigar, sung by the crowd, and SOS, from their latest album, released three years, were part of the good times of their performance.

After the passage of the Montreal female quartet NOBRO, in front of an almost overflowing “Pigeonnier”, already at the start of the evening, the Toronto OBGMS, led by the very dynamic Densil McFarlane, gave a furious performance.

The specialized magazine Spin had included them, in the fall of 2021, in their list of 50 best rock groups of the moment.

“Come closer, come closer. Do not be afraid”, he launched before launching their passage on the boards with the pieceCash.

The singer almost spent more time among the crowd than on the boards. He led the slam sessions, found a phone and sang, too. It seems that we will be able to see them again, in October, at the Imperial Bell.