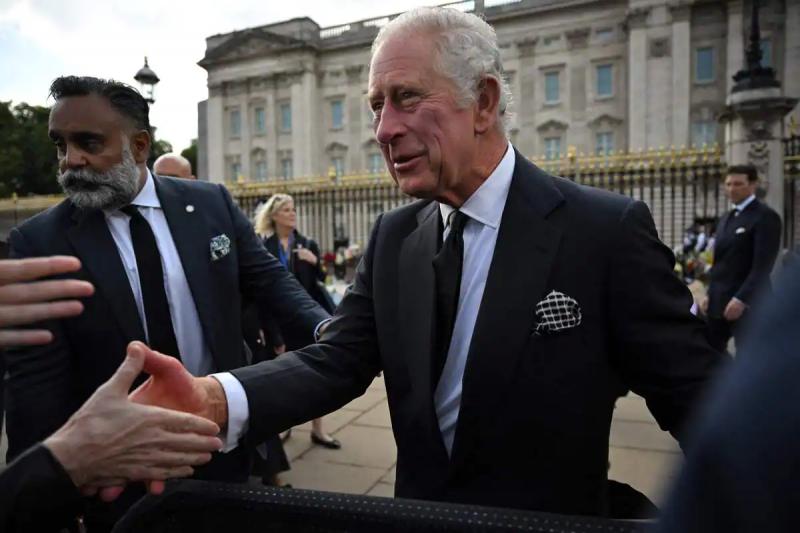 It was his first public appearance as King: Charles III alighted from his carriage outside Buckingham Palace and, as a present to the crowd, he shook hands with dozens of those present .

This moment was not planned in the protocol, so people did not hide their joy, after mourning Queen Elizabeth II who died on Thursday. “We love you King Charles”, we heard. “Hurray” sounded, applause too, under a ray of sunshine.

It was a warm welcome for this king who was far less popular than his mother, who was immensely loved.

Charles III, dressed in a black suit, shook hands with dozens of people, who had smiles on their faces. A woman even gave him a “please!” before kissing her on the cheek. Some sang the national anthem. “Thank you” notably seemed to respond to the king. He waved to those who were a little further away.

He thus went up several tens of meters the crowd massed behind barriers. The images filmed by helicopter show the thousands of people gathered in front of Buckingham to experience this historic moment as closely as possible.

With his wife Camilla, dressed in a black dress, he looked at the hundreds of bouquets of flowers deposited since Thursday in front of the gates of the palace. And for the first time as king, he passed the gates of Buckingham, walking side by side with the queen consort in the courtyard before entering the imposing building.

“We must love him”

“I saw the top of his head. I did not expect that. I was just coming to lay flowers,” Apophia Othieno, a university teacher, told AFP, smiling. “It was good to see Charles, our future king, and Camilla too. It was exciting. This is probably a once-in-a-lifetime chance.”

Stephen Johnson, a homelessness volunteer, stood by the Buckingham gates, with the Union Jack and a picture of the Queen. This 56-year-old Londoner said he was “moved and fearful”. “I feel like when Diana (first wife of Charles and mother of Princes William and Harry) died. I'm still making up my mind about King Charles III.”

“He will probably be crowned next year at 74. In 10 or 20 years, we could end up having another coronation,” he noted. “He's our king now, we have to love him, but Diana's memories are fresh. Just last month, we celebrated the 25th anniversary of his passing.”

Charles III was arriving from the residence in Balmoral, Scotland, where his mother died on Thursday afternoon. After landing in London, he drove through the capital.

Charles was to record his first speech in Buckingham's Blue Drawing Room. of monarch, for a scheduled broadcast at 6 p.m. local time (5 p.m. GMT). An official photo was to be taken during this registration.

Charles III will be officially proclaimed king on Saturday morning.