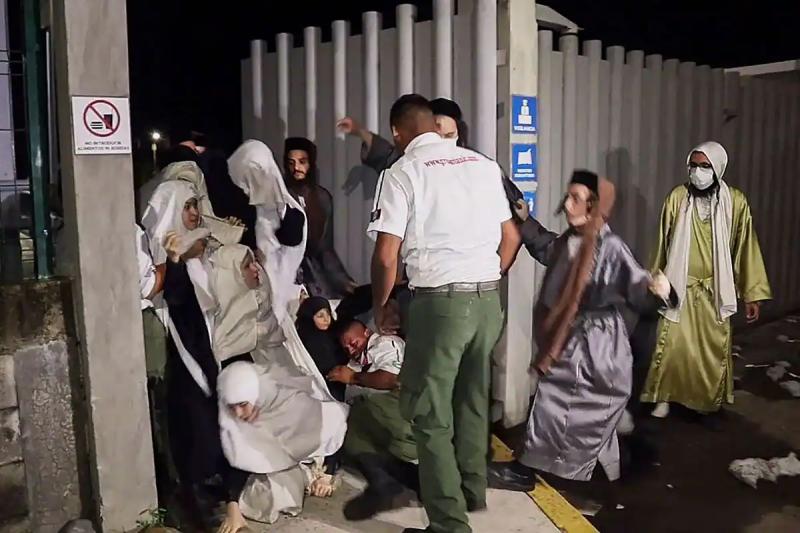 About 20 members of the Lev Tahor Jewish sect, ultra-Orthodox suspected of child abuse and sex crimes, fled from a center where they had been placed in southern Mexico after their arrest a few days earlier, a regional official said Friday.

“They escaped from the Inn of the Integral Development of the Family (DIF, public body editor's note). They destroyed the hostel” where they were kept under surveillance in Huixtla, in the state of Chiapas, 190 km from the border with Guatemala, a source from this institution dedicated to the protection of the environment told AFP. childhood.

The facts occurred on Thursday. Television footage shows the fugitives, including minors, in white and gray tunics fighting with two guards, one of whom falls to the ground. They then fled to an unknown destination in this region of Chiapas known for its mountains, forests and jungle. The 26 members of the sect had been placed in this hostel last Friday after they were arrested in a police raid in which a three-year-old boy was returned to his father who had fled the sect, the ministry said on Tuesday. Israeli Foreign Affairs.

Among the arrested members of different nationalities (Israeli, Canadian, American and Guatemalan), two are suspected of sex crimes and human trafficking. They face up to 20 years in prison if found guilty by a local court.

The Lev Tahor sect – meaning “Pure Heart” in Hebrew – was formed in the 1980s and practices an ultra-Orthodox form of Judaism, where women notably wear black tunics covering them from head to toe.

Alternatively passed through the United States, Guatemala and Canada , this group is known for its extremist practices and for imposing a strict regime on its followers. They are notably accused of promoting marriages between minors and violence against members of the sect.