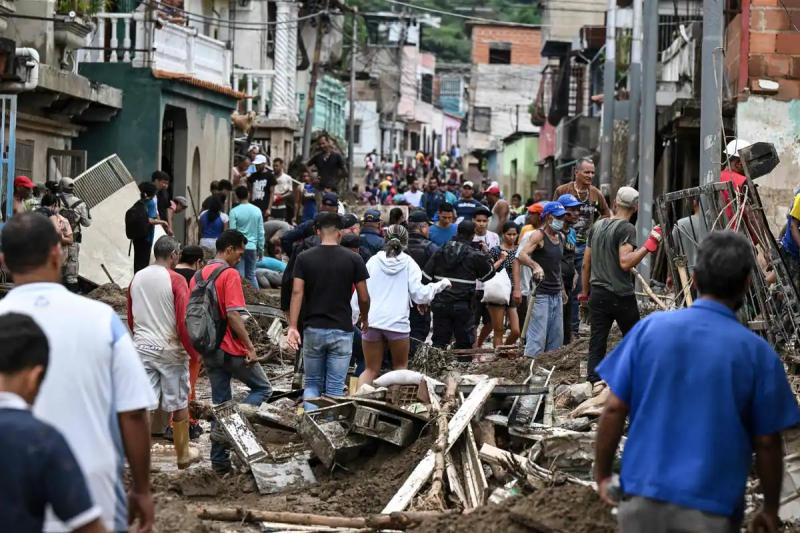 Houses and businesses destroyed, mudslides, trees uprooted… at least 22 people are dead and 52 are missing after a landslide late Saturday afternoon in Las Tejerias, an industrial town in the center of Venezuela.

The heavy rains that have been falling for weeks have already caused the death of 13 people across the country.

“Five streams have overflowed and (…) we are seeing very significant damage here, human losses: to date, we have already found 22 dead, there are more than 52 people missing”, according to the first assessment of the Venezuelan Vice President Delcy Rodriguez.

In Las Tejerias, the tragedy came after three hours of heavy rain that began on Saturday afternoon. Several rivers burst their banks and washed away land, rocks and trees from the mountainsides that border the city of about 50,000 people.

The city, located about fifty kilometers southwest of Caracas, now has an apocalyptic appearance with gutted houses and businesses and the mud that has invaded the streets.

Gigantic trees and cars have been washed away and now litter the main road, littered with bits of wood, sheet metal and other debris.

< p>“The city is lost, Las Tejerias is lost,” laments Carmen Melendez, who has lived there for 55 years.

In tears, Loryis Verenzuela, 50, contemplates the scale of the disaster:. “I never thought something of this magnitude could happen, it’s strong!

President Nicolas Maduro has declared three days of national mourning in “solidarity with the families” and promising the inhabitants that they “are not alone! .

A thousand people are taking part in the rescue operations, Interior and Justice Minister Remigio Ceballos told AFP, who went there to assess the damage.

“ We had a huge landslide, a consequence of climate change,” the minister said, attributing the rainfall to the passage of Hurricane Julia further north in Venezuela.

During his visit, Mr. Ceballos Ichaso clarified that “a record amount of precipitation” fell on the city, assuring that the average volume of water that falls in a month fell in a day. “These heavy rains have saturated the ground,” the minister added.

On Sunday, teams of workers equipped with machines were clearing the roads covered in mud and debris. In images taken by drones used by rescue teams, large amounts of mud and dirt can be seen covering several streets in Las Tejerias, where residents were trying to shovel tons of mud from homes.&nbsp ;

Worried, Carmen awaits news of Margot Silva, a missing relative. She lives in a nearby town and had been to Las Tejerias to run some errands.

“It's the first time we've seen something like this, we know we'll get over it, but we regret the loss of life,” Carmen told AFP.

On social media, many people are offering their help and Los Leones, the major baseball club in Caracas, has indicated that he organized a collection of non-perishable food, mineral water and clothing for the victims.

Opponent Juan Guaido has meanwhile estimated on Twitter that it was necessary to support the victims and “respond to the emergency”, criticizing a “dictatorship which confiscates power without worrying about the people”.