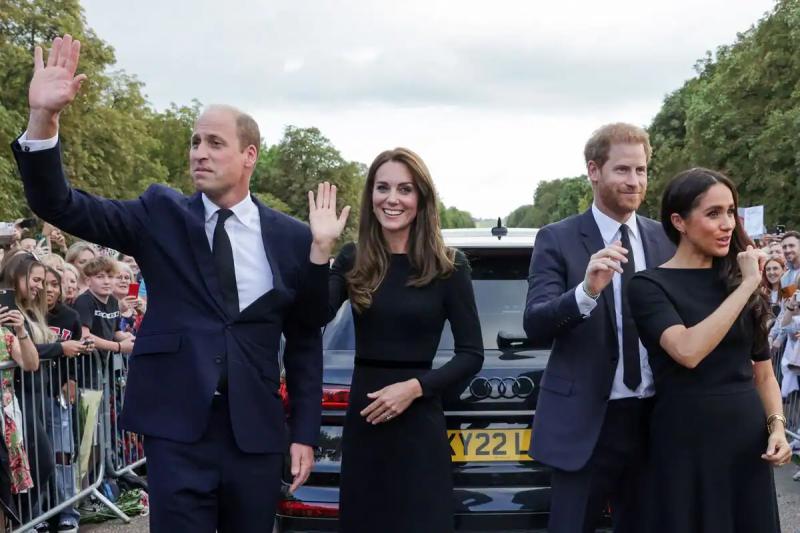 Princes William and Harry and their wives Kate and Meghan created a surprise on Saturday by sharing a walkabout near Windsor Castle, an unprecedented joint appearance since 2020, to pay tribute to Elizabeth II, whose funeral will take place on September 19 .

Reputedly cold for months, this is the first time the sons of King Charles III and their wives have been seen together since March 2020.

Some way to steal the show from Charles III, officially proclaimed king by the Accession Council meeting in London on Saturday morning during a historic ceremony, two days after the death of Elizabeth II at 96.

< p>“All 4 One,” headlined The Sun tabloid for its Sunday edition, eclipsing the new king from its front page to instead feature an image of the foursome, also front-paged on all UK media sites on Saturday night. p>

The two couples, once dubbed “the Fab Four” (the fantastic four) have been estranged since Harry and Meghan's announcement that they were retiring from the royal family and moving to California.

On Saturday, the two couples first gathered in front of the bouquets left by the crowd at the gates of the castle where the queen has lived most of the time for the past two years. Despite everything remaining distant, they then enjoyed a walkabout of more than 40 minutes before leaving in the same car.

A little earlier, William, now heir to the throne, had sent a message poignant to the British to evoke “the loss of a grandmother”. “It's going to take me some time to get used to the reality of life without Grandma,” he said.

< strong>Funeral and proclamation of Charles III

Buckingham Palace has announced that the funeral of Elizabeth II, who died aged 96 after 70 years of reign, will take place at Westminster Abbey on September 19 at 11:00 a.m. (10:00 GMT).

Leaders from all over the world are expected there, and the king has declared a public holiday for the occasion.

“I will honor his memory by supporting my father, the king, in every way possible,” added William, eldest son of Charles III who awarded him the title of Prince of Wales on Friday.

Step after a stage, in the greatest solemnity, Charles III, 73, installed himself as head of state with the heavy task of succeeding an ultra-popular monarch, respected for his sense of duty and for having preserved the monarchy in throughout his historic reign, the longest in British history.

“Prince Charles Philip Arthur George is now, by the death of our Lady Sovereign of happy memory, become our Charles III…God Save the King,” the Council of Ministers proclaimed on Saturday morning. accession, although Charles automatically became monarch upon the Queen's death.

The ceremony at St. James's Palace, attended by some 200 dignitaries, including Prime Minister Liz Truss and her six predecessors, marked was televised, a first. The accession of Charles III was then announced on the balcony of the palace, during a ceremonial ceremony from another time.

“My mother's reign was unequaled in its duration, her devotion and her devotion (…). I am deeply aware of this great heritage, of the duties and the heavy responsibilities of sovereignty, which are now transmitted to me,” said Charles III.

Trumpets then sounded and cannons were fired across the UK. Hundreds of people had gathered in front of Saint James with the hope of catching a glimpse of the monarch. There were thousands around Buckingham Palace.

Prime Minister Liz Truss and MPs including opposition leader Keir Starmer pledged allegiance to the king during a rare session in the House of Communes on a Saturday. Charles III then received the Prime Minister, the principal ministers and the leaders of the opposition in the afternoon.

At Balmoral, where the Queen died on Thursday, Princes Andrew and Edward and Princess Anne went to thank the public who had come to pay tribute to their mother.

“Thank you for coming,” said Andrew after taking a moment to gather with his brother Edward and sister Anne in front of the flowers laid outside the Scottish residence.

The coffin of Elizabeth II will be transferred by road to Edinburgh on Sunday in a long procession which will pass through Aberdeen and Dundee in particular. He is due to arrive in the Scottish capital around 15:00 GMT.

In the Scottish capital on Saturday, many onlookers watched as police and security guards prepared for the coffin to arrive in the city.

“I told the boys that we were going through the Story. And since we are here, we wanted to come and see where she was going, ”explains Laura Burns, a Northern Irishwoman passing through the Scottish capital where one of her sons is preparing to study.

After a ceremony in Edinburgh, the body will travel to London on Tuesday and, after a procession through the streets of the capital on Wednesday, it will rest for four days in Westminster Hall, the oldest section of the Houses of Parliament open for the occasion 23 hours a day. to the public.

On Friday evening, for the first time in 70 years, the British anthem “God save the King” was sung at St. Paul's Cathedral in London. It replaces “God save the Queen”, which had been sung since 1952.

Earlier, Charles III gave his first televised address as sovereign, a recorded address in which he paid a moving tribute to his “beloved mama”, and promised to serve the British all his life.

Charles III ascends to the throne at a difficult time as Britain faces the worst economic crisis in 40 years, with four prime ministers in six years.

At 73 , he is the oldest British monarch at the beginning of his reign and remains infinitely less popular than his mother, who had known how to maintain the prestige of the monarchy, giving no interviews and keeping her opinions to herself.

But the new King still received a standing ovation when he arrived in Buckingham on Friday afternoon on his return from Scotland.

The King has made it known that royal mourning – which concerns family, staff and representatives of the royal household – would last up to seven days after the funeral are from the queen. The national mourning decreed by the government must last him until the day of the funeral.