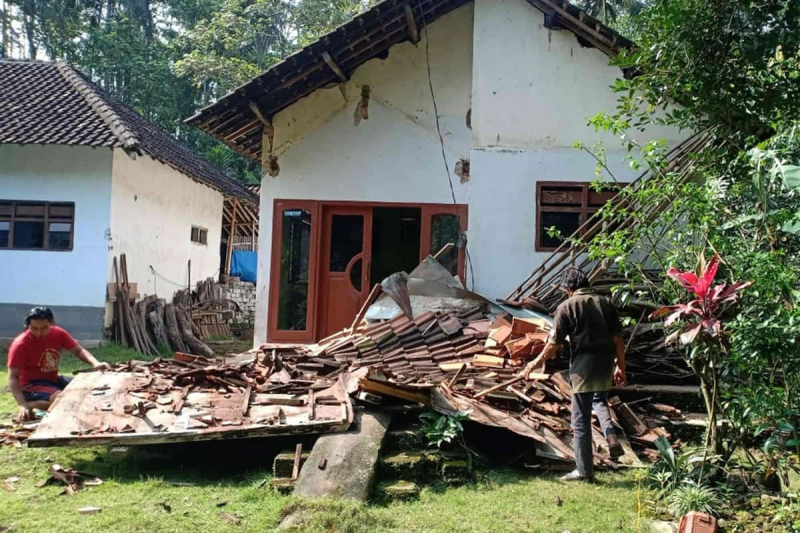 At least 44 people died and hundreds more were injured in a 5.6 magnitude earthquake on the Indonesian island of Java on Monday, shaking skyscrapers all over the the capital Jakarta.

“There have been dozens of people killed (…) To date, 44 people have died,” Adam told AFP, a spokesperson for the administration of the city of Cianjur (West Java), who has only a first name like many Indonesians.

“Hundreds, and maybe even thousands of houses are damaged” by the earthquake, he added.

The previous toll was nearly 20 dead. Herman Suherman, Cianjur's chief administrative officer, told Metro TV that “at least” 300 people were being treated at a single hospital in the city.

“Most have broken bones after getting stuck in the rubble of buildings,” he said.

Shops, a hospital and an Islamic boarding school in the city suffered extensive damage from the earthquake, according to local press.

Media showed several buildings in Cianjur whose roofs had collapsed .

Mr. Suherman also reported that relatives of the victims were gathered at Sayang Hospital, warning that the toll could rise as villagers may still be trapped in the rubble.

“There are many families in villages that have not yet been evacuated.”

Authorities earlier reported rescuing a woman and baby trapped in a landslide in Cianjur.

“We urge people to stay outside buildings at this time as there could be possible aftershocks,” the director of the Indonesian meteorological agency, Dwikorita Karnawati, told reporters.

< p>The epicenter was located near this city some 100 kilometers south of Jakarta, according to the United States Geological Survey (USGS).

The United States Geological Service USGS had estimated in a Initially the magnitude of the earthquake was 5.4.

No casualties or significant damage in Jakarta were immediately reported but in the capital, people rushed out of buildings. Mayadita Waluyo, a 22-year-old lawyer, described the panic of employees rushing to the emergency exits.

“I was working when the ground shook. I could clearly feel the tremor,” she said.

Hundreds of people waited outside after the quake, some wearing hard hats to protect themselves from falling debris , reported an AFP journalist.

Indonesia is regularly confronted with earthquakes or volcanic eruptions, due to its position on the Pacific “ring of fire” where the plates tectonics meet.

In 2018, the island of Lombok and the neighboring island of Sumbawa were hit by a violent earthquake that killed more than 550 people.

The same year, another earthquake of a magnitude of 7.5 had caused a tsunami which had hit Palu, on the island of Sulawesi, resulting in the death or disappearance of 4,300 people.

The island of Java was hit by a earthquake of magnitude 6.3 in 2006, near the city of Yogyakarta (center), causing approximately 6,000 deaths and tens of thousands of injuries.

A year earlier, an earthquake of magnitude 8.7 hitting the coast of Sumatra, regularly affected, had killed more than 900 people.

But the country remains marked by the earthquake of December 26, 2004 of a magnitude of 9.1 off the coast of Sumatra.

It caused a major tsunami that killed 220,000 people across the region, including 170,000 in Indonesia alone, one of the worst natural disasters. s murderous never recorded.