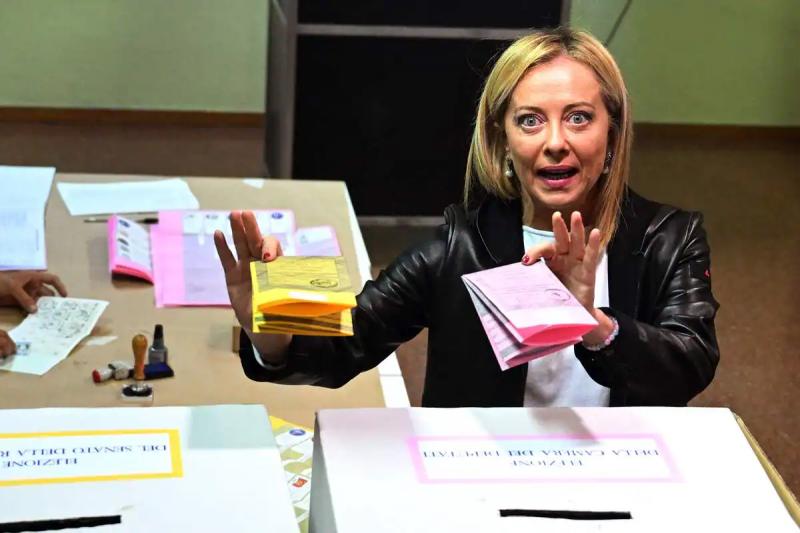 After Sweden, the far right has made a new breakthrough in Europe with the victory of Giorgia Meloni in Sunday's legislative elections in Italy, where for the first time since 1945 a post-fascist party is at the gates of the power.

By remaining in opposition to all the governments that have succeeded each other since the 2018 legislative elections, Fratelli d'Italia (FdI) has established itself as the main alternative, going from 4.3% to around a quarter of the vote, according to the first exit polls, becoming the country's leading party.

The coalition it forms with the other far-right eurosceptic party, the League of Matteo Salvini, and Forza Italia, the conservative party of Silvio Berlusconi, would collect up to 47% of the vote.

And with the complex game of the electoral system, it should secure the absolute majority of seats in both the Chamber of Deputies and the Senate.

If these results were confirmed, FdI and the League would win together “the highest percentage of votes ever recorded by far-right parties in the history of Western Europe from 1945 to today,” noted the Italian Center for Electoral Studies (CISE).

The formation founded at the end of 2012 by Giorgia Meloni with dissidents from Berlusconism is ahead of Enrico Letta's Democratic Party (PD), which failed to raise a useful vote to block the far right and only won between 17 and 21%.

The coalition has a “clear advantage both in the House and in the Senate”, rejoiced on Twitter Matteo Salvini.

This earthquake comes two weeks after the one which, in Sweden, saw the victory of a conservative bloc including the Democrats of Sweden (SD), a party from the neo-Nazi movement which made a strong breakthrough, becoming the first right-wing party in the Nordic country.

In what was (mis)seen in Rome as a no-cost warning, European Commission President Ursula von der Leyen recalled that the EU has “instruments” to sanction member states that undermine the rule of law and its common values.

“The Italians offered a lesson in humility to the European Union which, through the voice of Mrs. von der Leyen, claimed to dictate their vote,” tweeted the president of the French National Rally Jordan Bardella.

Mr. Orban, through the voice of his political director, MP Balazs Orban, added this message: “We need more than ever friends who share a common vision and approach to Europe”.

< p>Meloni “showed the way to a proud and free Europe of sovereign nations”, rejoiced for his part the leader of the far-right Spanish party VOX, Santiago Abascal.

Fratelli d'Italia owes its success as much to the broken promises of its adversaries and to the wind of “clearance” blowing on the peninsula as to the charisma of its leader.

This 45-year-old Roman who, as a young activist, said she admired Mussolini, managed to demonize his image and unite in his name the fears and anger of millions of Italians in the face of soaring prices, unemployment, threats recession or the neglect of public services.

The government will notably have to manage the crisis caused by galloping inflation, Italy already crumbling under a debt representing 150% of GDP, the highest ratio high in the euro zone behind Greece.

In this country with chronic government instability, experts already agree on the short life expectancy of the victorious coalition, a marriage of convenience between three allies with competing ambitions.

For Ms. Meloni, “the challenge will be to transform her electoral success into government leadership that can be sustained over time, that's the great unknown,” said Sunday evening Lorenzo De Sio, professor of political science at the Luiss University of Rome.