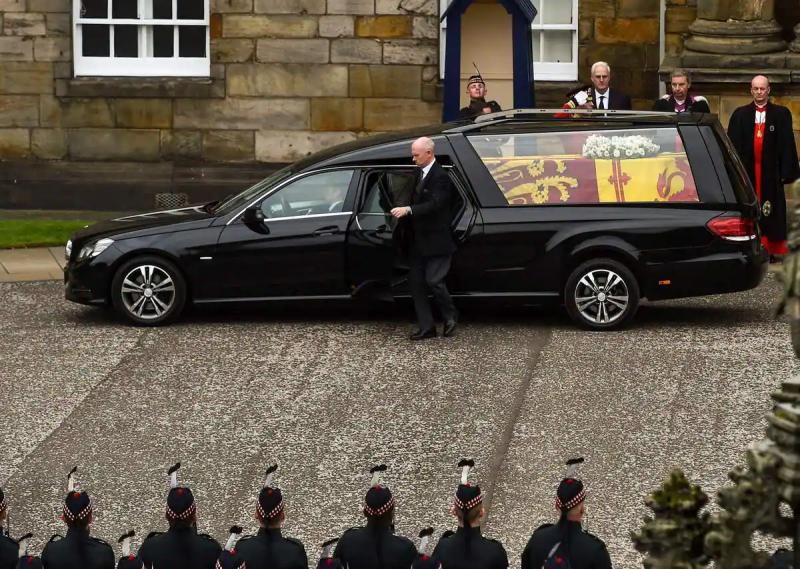 The British will finally be able to approach their so popular queen: after having joined Edinburgh, the coffin of Elizabeth II will be exposed to the public on Monday, after a procession led by Charles III, which launches a week of goodbyes until his state funeral.

Many will undoubtedly flock to Saint-Gilles Cathedral to try to pay closer homage to their sovereign who died on Thursday, given the number of people who gathered along the route of the funeral procession, the day before, to clap, cry or throw a flower as they pass.

On Sunday afternoon, in the Scottish capital, tens of thousands of people welcomed the hearse under the cries of “Be blessed”, a sign of the fervor of the British people for the one who reigned for more than 70 years before stepping down. extinguished at the age of 96, two days after enthroning his 15th head of government.

“I could only see him from afar, but it was very moving. She was a wonderful person, it's very sad, I have a lot of respect for her,” said Theresa Brown, a receptionist living in Edinburgh, on Sunday after the funeral procession passed.

< p>While awaiting the funeral of Elizabeth II on September 19, her son, the brand new King Charles III, is settling in as monarch, with the heavy task of succeeding his popular mother in a context of serious social crisis and divisions in the United Kingdom, but also of protest against the colonialist past in its 14 other kingdoms.

He is 73 years old, older than all the British sovereigns on their accession to the throne.

He is due to go to Parliament in London at 10 a.m., accompanied by his wife, Queen Consort Camilla, to receive condolences from the Presidents of both Houses.

They will then fly to Edinburgh, to the Palace of 'Holyroodhouse, the official royal residence in Scotland, where the Queen's remains spent the night, watched over by the Royal Company of Archers, a ceremonial unit that serves as the Sovereign's bodyguard.

The staff of the palace, where the queen came to spend each early summer and where a garden party was held with some 8,000 guests, will thus be able to pay a last tribute to the queen, in the same way as the employees of Balmoral Castle. , where she breathed her last on Thursday, were able to do so.

Charles and Camilla behind the coffin

The coffin will leave the Stone Palace in early afternoon, at 2:35 p.m., to reach Saint-Gilles Cathedral.

Crowds are expected to see the King and Queen consort because the latter will both walk behind the hearse while the rest of the Royal Family will follow by car during the half-hour procession of just over a mile .

In the religious ceremony that will follow, the Crown of Scotland, in solid gold, will be placed on the coffin.

The Queen's remains will remain on display in the cathedral for a period of 24 hours, announcing a massive influx.

Sunday, the curious waited for hours to be sure to have a front row seat to see, if only for a few seconds, the oak coffin pass aboard the hearse.

“Everywhere in our lives”

Some foreigners who happen to be in the United Kingdom during this historic moment are marked by the communion of the people with their Queen.

To like William Couse, an American from Atlanta, impressed by the absence of “slingers”: “The seriousness with which this nation treats its royal family is formidable”.

“There is a real sense of the relationship to history,” analyzes Rob Parsons, a 28-year-old who did not hesitate to travel several hundred kilometers from York. “We are one of the few countries in the world to have retained this sense of historical ritual and this link with the past,” he adds.

“Coming here is also showing of unity,” adds his girlfriend, Lucy Hampshire. “She was everywhere in our lives, on our currency, our stamps, everywhere. It's like someone in your family you've never met,” she continues.

After the religious ceremony, King Charles III, who has promised like his mother to serve his people his whole life, is due to receive Scottish independence First Minister Nicola Sturgeon and go with the Queen Consort to the local parliament for a session of condolences .

Tuesday evening, after being presented for 24 hours to the population, the body will embark, from the Edinburgh airport, aboard a Royal plane to London.

It will again be on public display 24 hours a day, enclosed, draped in the Royal Standard, on a dais in the Palace of Westminster at from Wednesday evening. He will stay there for five days before the state funeral, which dignitaries from around the world are expected to attend – a considerable security challenge for the police -, including the American president, Joe Biden, the French president, Emmanuel Macron, and the Australian prime minister, Anthony Albanese. , as well as numerous crowned heads.