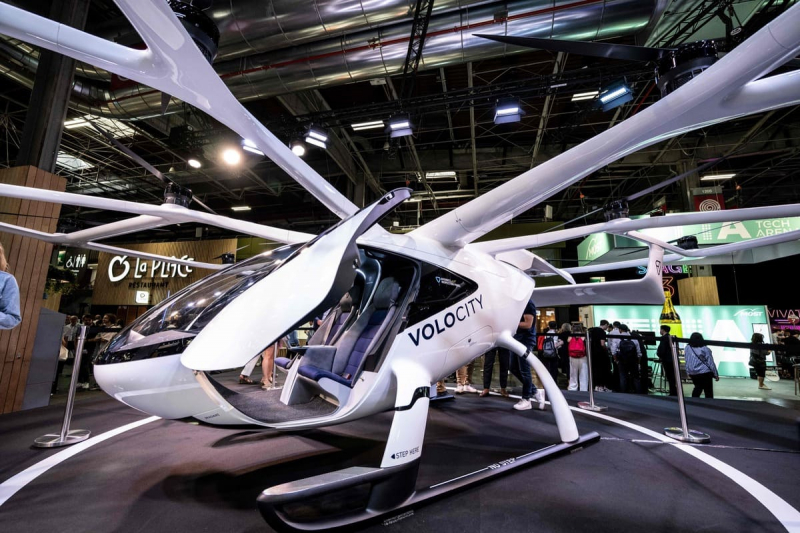 Five bases are planned in Paris and its region to accommodate flying taxis by 2024, announced the promoters of this project who wish to take advantage of the showcase of the Olympic Games for this new offer mobility.

This objective, for an experimental service which has yet to obtain regulatory green lights, was mentioned on Thursday during the inauguration at Pontoise-Cormeilles-en-Vexin airport (north-west of Paris), of the passenger terminal of a “vertiport”.

It is in these facilities, 35 km from the French capital, that the airport manager Groupe ADP, the RATP, the Ile-de-France region and the German aircraft manufacturer Volocopter have been testing vertical take-off and landing (VTOL) vehicles in real conditions for a year.

“Our objective is very clear, it is that in 2024, Notre-Dame reopens, that France shines at the Olympic Games and that in the Ile-de-France sky we can see the first VTOLs flying in Europe”, declared Thursday the general manager of Civil Aviation, Damien Cazé.

These electrical devices will have to be integrated into both air traffic and the urban environment, without neglecting their acceptability by the population.

The “VoloCity” machines, looking like large insects crowned, for their two-seater models, by 18 rotors, turn out to be four times less noisy than helicopters, according to Volocopter.

Two overhead lines are planned , one between Paris and Versailles, the other would link Charles-de-Gaulle and Le Bourget airports to intramural Paris, according to ADP.

Volocopter “is in the process of 'obtain the European certification which will allow it to be able to fly on all the vertiports' concerned, according to ADP, which hopes for a green light from the European Aviation Safety Agency (EASA) in 2024.

“The key now is to prepare for certification, it will be a big challenge for the next 18 months,” said Volocopter CEO Dirk Hoke.

“But we are on the right track to fly to Paris in the summer of 2024″, assured this former senior Airbus official.

He said he was committed to “proving that the technology is safe”: the VoloCity will be subject to ” same safety rules as Airbus or Boeing planes”, i.e. an acceptable technical margin of error of only one in a billion.

By 2024 “the planned experiment will be based on a fleet of ten VoloCities ready to be deployed” in Ile-de-France, each device being able to perform two or three flights per hour thanks to quickly interchangeable batteries.

The VoloCities two-seaters will allow the transport of a paying passenger, the other seat being reserved for a pilot while waiting for autonomous versions.

The CEO of ADP, Augustin de Romanet, has on Thursday a comparable cost for customers to that of a VTC trip.