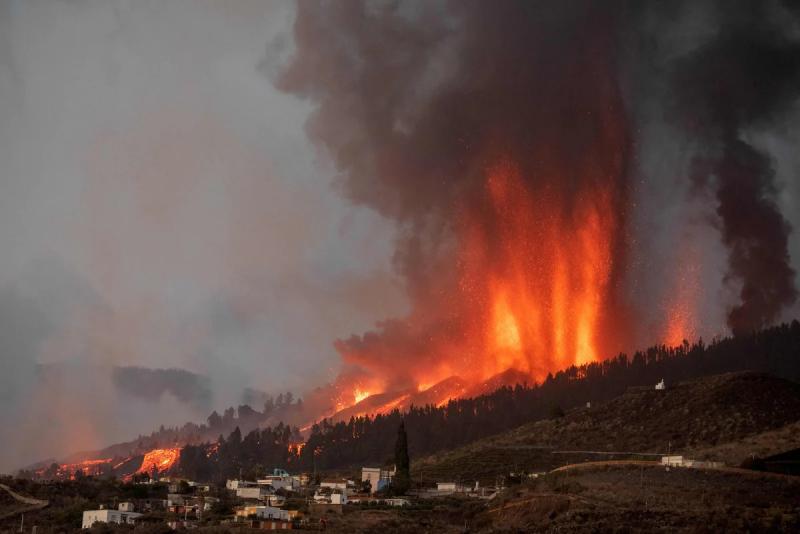 When the volcano on the Spanish island of La Palma erupted a year ago, Leticia Sanchez Garcia's home was one of the first to be engulfed by lava.

Hosted for months by friends, this mother now lives in a prefabricated wooden house with her partner and her three children aged 2, 6 and 12. “Our plans?… We don't have any plans,” Leticia told AFP before bursting into tears.

Her little yard, where she grows mint and other grasses, offers a direct view of the volcano – now called Tajogaite and not Cumbre Vieja as when it erupted – and the lava flow that covered its home. But this 34-year-old caregiver tries never to look that way.

“I'm still in denial. I keep thinking that one day I'll go back,” she continues, explaining that she regrets her “garden, (her) hens, the moments with friends”.

His contract ends in December , like that of his companion, who had managed to find work recently as a street sweeper after losing his job in a banana plantation wiped off the map by the volcano.

In difficulty, the couple can stay for free for a year in this house provided by the authorities and located in Los Llanos de Aridane, the economic center of the island of 83,000 inhabitants located in the Canary archipelago, off the northwest of Africa.

Afterwards, they will have to pay rent.

“Some would rather be dead”

Erupted on September 19, 2021, the volcano poured out streams of lava for 85 days and spat clouds of ash which engulfed more than 1,000 houses but also schools and churches, and covered hectares of banana plantations, pillars of the island's economy.

To date, the authorities have released more than 500 million euros to rebuild the island, which has been used in particular to buy temporary housing, repair roads, clearing the ashes and financially helping people who have lost their jobs.

But many residents denounce the slowness and bureaucratic heaviness. Only 5 of the 121 prefabricated houses purchased by the authorities have been allocated to people who have lost their homes, according to the region.

About 250 people are still housed in hotels while another 150 live with relatives or friends, according to the Volcano Victims Platform.

“Nobody died in the eruption but some of us would rather be than to face all these problems,” said the Platform's president, Juan Fernando Perez Martin, a retired philosophy professor. 70 years old.

His house, adapted to his wheelchair, was covered by more than 20 meters of lava. Tired of waiting for government assistance, he borrowed money from the bank to buy a new, smaller house in the town of El Paso. He now lives there with his Mexican wife.

Apart from a frame of the Virgin of Guadalupe, now fixed to the wall of their kitchen, and a few rare objects, Juan Fernando and his wife lost everything, including a collection of 6,000 books.

Elsewhere on the island, where the eruption was declared over on Christmas Day, the gases will remain dangerous for a long time.

In the coastal town of Puerto Naos, around 1,100 people still cannot return to their homes due to the potential harmfulness of these gases. At the entrance to the city, signs representing a skull warn against the “risk of asphyxiation”.

“We are in the dark”, launches Eulalia Villalba Simon, who owns a restaurant and an apartment in Puerto Naos to which she no longer has access. Forced to rent accommodation on the other side of the island, this 58-year-old woman lives thanks to public aid and associations.